Accessibility links
Fernandes Vows to Fight for Presidency of Gallaudet Gallaudet University, the nation's leading liberal arts school for the deaf, has been in a state of crisis since last spring, when the school picked its next president. The choice of a long-time administrator Jane Fernandes set off a series of intense protests by students and faculty. Now, the end of the crisis may be in sight.

Listen
Fernandes Vows to Fight for Presidency of Gallaudet 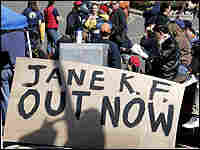 NPR is providing a full transcript:

ROBERT SIEGEL, host: Last night, we heard from protesters at Gallaudet University in Washington. Now we hear from the object of their anger, Jane Fernandes. She's the controversial administrator named as the next president of the nation's leading liberal arts school for deaf students. But the board of trustees has called an emergency meeting -- and will decide whether to tell her to step aside. NPR's Joseph Shapiro reports.

So why -- with all that anger hurled at her -- would Jane Fernandes still want to be president of Gallaudet?

JANE FERNANDES: I want to be president and I will be president because I care very deeply about deaf education.

SHAPIRO: Fernandes signs as an interpreter speaks. Some protesters don't trust her because as a child, she learned to speak and read lips. Fernandes says when she did learn sign language, at the age of 23, it was a breakthrough. And that's why she wants to be Gallaudet president, to help more students discover the richness of deaf culture.

FERNANDES: I had to work very hard to learn everything that I did learn. I did not have the services and the accommodations that deaf students have now in their schooling, and I believe that deaf people deserve the best education that we can provide them. It's my deep commitment to deaf people, which is the reason why I will be president of Gallaudet.

SHAPIRO: Whether she will become president -- the job she's supposed to take on Jan. 2 -- is up to the board of trustees. They chose her last May. They've issued strong support for her ever since.

But now they've called an emergency meeting for Sunday. And speculation on campus is that they wouldn't do that unless there was growing sentiment to tell her to step aside.

Brenda Jo Brueggeman is the acting head of the board of trustees. She still supports Fernandes. And she explains why she and the other trustees chose Fernandes last spring:

BRENDA JO BRUEGGEMAN: She was the most qualified candidate. A university president is not a popularity contest. It's not an easy job. It's one of the hardest jobs in the country.

SHAPIRO: Brueggeman says if Fernandes is forced to resign -- because it's the only way to stop the protest -- then that would undermine decision-making at Gallaudet for years to come.

BRUEGGEMAN: I don't know how if she were to step down, how we would ever be able to appoint a president. If in fact a group of protesters can control the decision, then that means you don't even have a process in place that would guarantee you could do it again.

SHAPIRO: One on one, Fenandes is personable. She's got a vision for the future of a diverse Gallaudet with higher academic achievement.

But she has made a lot of enemies since she arrived as an administrator more than a decade ago. She shook up departments, sometimes pushing out longtime staff members. Many co-workers say she's cold, distant and autocratic.

Still, a lot of college presidents are not warm and fuzzy.

Fernandes thinks some of the opposition to her is just old-fashioned sexism.

SHAPIRO: But that's not all she has to deal with. A majority of the faculty voted for a resolution calling on her to resign. And students keep taking over buildings and blocking most of the gates to the campus.

Fernandes says she's prepared to be president, and always sees protesters outside her office window. But members of the board of trustees will have to decide if that's the future they want for Gallaudet.

The protests at Gallaudet University have spilled over into the blogosphere. Most of the blogs support the students, faculty and alumni who object to the appointment of Jane K. Fernandes as president of the school for the deaf. But there is a range of opinion. The online chat forum alldeaf, for example, has threads debating the issues behind the protest. Here is a sampling of the blogs.

POV: Y-three supports the protests and wants Fernandes to resign. But its blogger-in-chief, Gallaudet alum Tayler Mayer, says he is "a strong believer in freedom of speech." So he developed DeafRead.com, a blog aggregator for issues concerning the deaf community, where all views on the protest are published -- even those from Gallaudet's official blog.

FYI: Y-three is the official blog of TaylerInfomedia, a Web development company started by Mayer, who provides technical assistance to other blogs representing the deaf community.

POV: Gallaudet grad Ricky D. Taylor, who says he is "arguably the most controversial deaf blogger in America," participates in protest activities and makes no attempt to hide his frustration with Fernandes' appointment.

FYI: Since the protests began, RidorLive.com's traffic has nearly quadrupled, says Taylor. The blog's name is actually an acronym of his name: Ricky D. Taylor.

Sample post: "Then there was a vote which Fernandes suggested the students [in her first-year seminar] to vote, the vote was to eject her as the instructor. If she cannot control 15 students, what makes you think she can control 1,800 students at Gallaudet?"

POV: Entrenched with the protesters in their "tent-city" at the school's front gate, '06 grad Elisa Abuchuchan blogs about events as they happen. She says, "I personally support the protest but I try to present more factual information rather than my opinions."

FYI: Abuchuchan, a '06 graduate, has been blogging since the protests began on May 1. On some days, she posts 10 updates or more.

FYI: 9th Prez also contains information on Gallaudet's presidential appointment process, Fernandes' track record and her vision for the future of the university.

Sample post: "Much of what has been written and offered up on many of the Web sites and blog sites that have sprung up in response to the series of events associated with the presidential transition at Gallaudet University has often been confusing, emotional, erroneous, fictional, and sometimes mean and hateful."