Accessibility links
The War on the Word 'Jihad' The word jihad is pervasive in American culture, but the word has changed meaning over the centuries. Some Islamic scholars think the word "jihad" should be abandoned and replaced with a more effective term.

Listen
The War on the Word 'Jihad' 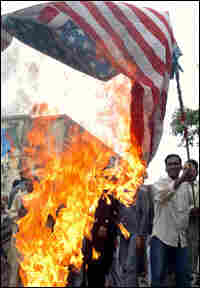 Every political generation spawns a new set of terms — ideas, words, rhetoric to help explain, simplify, advance or destroy a cause. This is the first report in a five-part series exploring the political language of our times.

Ten years ago, few people in America had heard the word 'jihad', but it's so common now that it has an entry in the Oxford English Dictionary.

Islamic history professor Douglass Streusand says that the first time he did a Web search on the word 'jihad,' the first thing that came up was a "jihad to remove Barney from television."

"That's what the term has come to mean in the West," says Streusand. "It means a fanatical struggle."

But how Muslims have interpreted the term has changed over time.

"[Jihad] definitely had this notion of both an internal struggle as well as an attempt to spread the just laws of Islam to other countries through fighting," says Johns Hopkins political scientist Mary Habeck.

Habek says the meaning of the word is different now than from previous centuries.

But today, when radical Islamists describe themselves as jihadists, Habeck says they mean one thing.

"Violence and violence alone to attain their ends," she says.

Since Sept. 11, Habeck has encouraged government officials to describe Islamic militants as jihadis or jihadists. Many in the government are apparently listening to her suggestion.

"Since Sept. 11," says Habeck, "it's important for the American people to remember [that] there have been a lot of attacks on a lot of nations by these jihadists."

Jihad actually has a multitude of meanings.

In the case of al-Qaeda, they call themselves jihadists and they don't mean an inner struggle for peace.

"These groups, in many ways, represent a wholly new sect that has arisen out of Islam." says Islamic historian Reza Aslan, "One in which all the multiplicity [and] diversity of Islamic thought, and the pillars upon which this faith and practice have rested for 14 centuries, [have] been diluted into this one single notion -- jihad and nothing else."

Aslan says that even though the concept of jihad isn't one of the five pillars of Islam, extremist groups have managed to elevate the importance of violent jihad as a sort of politicized religious duty.

Last year, Islamic history expert Douglas Streusand submitted a paper to the Pentagon which argued that the military should stop using the words "jihadis" or "jihadists" when talking about Islamic militants.

To draw a comparison, Streusand says, it would be like calling Germans during the Second World War 'National Socialist Aryan Heroes.'

By his account, when U.S. policymakers use the term 'jihad,' they are actually turning off a lot of potential allies in the Islamic world.

"If you say we fight jihadists, then you've just offended a billion and a half Muslims," says Streusand.

UCLA law professor Khaled Abu El Fadl is a controversial figure in the Arab world for his bruising missives against Islamic extremists.

"When I write an article speaking to extremists and convincing them that they are wrong theologically and morally and legally," says Abu El Fadl, "I consider my self in a state of jihad. I expect to be rewarded by God."

Both professor Abu El Fadl and Streusand have some practical advice for those still wishing to insult terrorists: Drop the 'J' word and use the 'H' word instead.

"The term in Islamic law which best describes the activities of al-Qaida is hirabah, which originally meant brigandage, but has a more general meaning as sinful warfare," says Streusand. "If our elected officials started saying 'This is a war against hirabis,' that would be more effective. It would certainly be better than using the term jihad or jihadis which is actively harmful."

Abu El Fadl believes this kind of language will actually resonate well in the Islamic world.

"[Not using the world jihad] would work miracles for Muslims," he says. "For once to find our officials take their tradition, their legal tradition [and] their moral tradition seriously."

But then, as Habeck says, the discussion over terminology is one that ought to happen in the Islamic world.

It's up to Muslim leaders, she says, to change the way jihad is understood in the West.