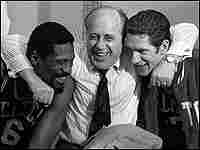 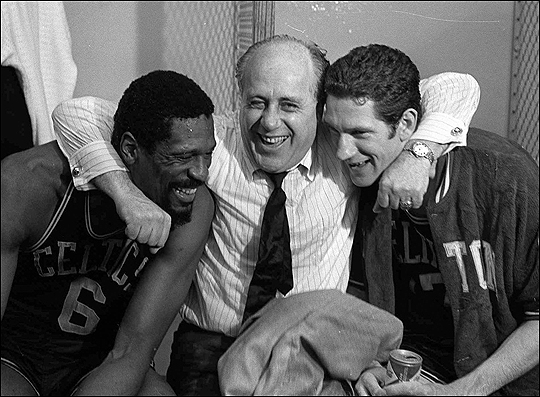 A heart attack claims the legendary basketball mentor. He built a sports dynasty in Boston Garden, leading the Celtics to 16 titles as coach and general manager, and was widely considered the greatest coach in the history of the National Basketball Association.

The list of NBA players nurtured to greatness by Auerbach begins with Bob Cousy and includes Bill Russell, John Havlicek and Larry Bird. He made Russell the NBA's first black head coach in the late 1960s and was still a powerful influence on today's coaches and players at the pro and college level.

Auerbach: A Life in Basketball 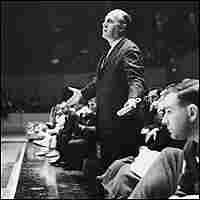 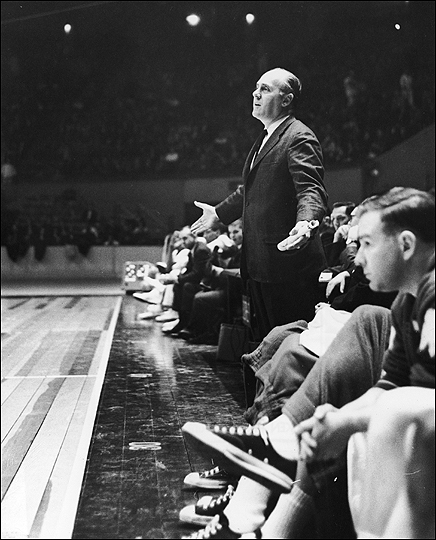 Auerbach patrols the sidelines at Boston Garden during a 1965 game.

WASHINGTON (AP) -- His genius was building a basketball dynasty in Boston, his gift was straight talk, his signature was the pungent cigar he lit up and savored after every victory.

Red Auerbach, the Hall of Famer who guided the Celtics to 16 championships -- first as a coach and later as general manager -- died Saturday. He was 89.

Auerbach died of a heart attack near his home in Washington, according to an NBA official, who didn't want to be identified.

His last public appearance was on Wednesday, when he received the Navy's Lone Sailor Award during a ceremony in the nation's capital.

Auerbach's death was announced by the Celtics, who still employed him as team president. Next season will be dedicated to him, they said.

"He was relentless and produced the greatest basketball dynasty so far that this country has ever seen and certainly that the NBA has ever seen," said Bob Cousy, the point guard for many of Auerbach's championship teams, who referred to his coach by his given name. "This is a personal loss for me. Arnold and I have been together since 1950. I was fortunate that I was able to attend a function with him Wednesday night. ... I am so glad now that I took the time to be there and spend a few more moments with him."

Tom Heinsohn, who played under Auerbach and then coached the Celtics when he was their general manager, remembered his personal side.

"He was exceptional at listening and motivating people to put out their very best," Heinsohn said. "In my playing days he once gave me a loaded cigar and six months later I gave him one. That was our relationship. We had a tremendous amount of fun and the game of basketball will never see anyone else like him."

Auerbach's 938 victories made him the winningest coach in NBA history until Lenny Wilkens overtook him during the 1994-95 season.

"Beyond his incomparable achievements, Red had come to be our basketball soul and our basketball conscience," NBA commissioner David Stern said, "the void left by his death will never be filled."

Auerbach's nine titles as a coach came in the 1950s and 1960s -- including eight straight from 1959 through 1966 -- and then through shrewd deals and foresight he became the architect of Celtics teams that won seven more championships in the 1970s and 1980s.

Phil Jackson matched those record nine championships when the Los Angeles Lakers won the title in 2001-02.

"Red was a true champion and one whose legacy transcends the Celtics and basketball," Sen. Ted Kennedy said. "He was the gold standard in coaching and in civic leadership, and he set an example that continues today. We all knew and loved Red in the Kennedy family."

Auerbach was inducted into the Basketball Hall of Fame in 1969. The jersey No. 2 was retired by the Celtics in his honor during the 1984-85 season.

"He was a unique personality, a combination of toughness and great, great caring about people," said author John Feinstein, who last year collaborated on a book with Auerbach on the coach's reflections of seven decades in basketball. "He cared about people much more than it showed in his public face, and that's why people cared about him."

With the Celtics, he made deals that brought Bill Russell, Robert Parish and Kevin McHale to Boston. He drafted Larry Bird a year early when the Indiana State star was a junior to make sure Bird would come to Boston.

"Red Auerbach was one of the most influential people in my life," Bird said. "Not only was he an inspiration to me throughout my career, he became a close friend as well. There could only be one Red Auerbach and I'll always be grateful for having the opportunity to experience his genius and his dedication to winning through teamwork."

Auerbach coached championship teams that featured players such as Russell, Cousy, Heinsohn, Bill Sharman, K.C. Jones and Sam Jones, all inducted into the Hall of Fame.

After stepping down as general manager in 1984, Auerbach served as president of the Celtics and occasionally attended team practices into the mid-1990s, although his role in the draft and personnel decisions had diminished.

"Red was a guy who always introduced new things," Celtics co-owner Steve Pagliuca told The Associated Press in an interview this month. "He had some of the first black players in the league and some people didn't like that, but you've got to do what's right for the fans."

When Rick Pitino took the president's title when he became coach in 1997, Auerbach became vice chairman of the board. After Pitino resigned in 2001, Auerbach regained the title of president and remained vice chairman. When the team was sold in 2002 to a group headed by Wyc Grousbeck, Auerbach stayed on as president.

Through all those changes and titles, Auerbach didn't lose his direct manner of speaking, such as when he discussed the parquet floor of the Boston Garden shortly before the Celtics' longtime home closed in September 1995.

"The whole thing was a myth," Auerbach said. "People thought not only that there were dead spots, but that we knew where every one was and we could play accordingly.

"Now, did you ever watch a ballplayer go up and down the court at that speed and pick out a dead spot?" he asked. "If our players worried about that, thinking that's going to help them win, they're out of their cotton-picking mind. But if the other team thought that: Hey, good for us."

As Celtics president, Auerbach shuttled between Boston and his home in the nation's capital, where he led an active lifestyle that included playing racquetball and tennis into his mid-70s.

Auerbach underwent two procedures in May 1993 to clear blocked arteries. He had been bothered by chest discomfort at various times beginning in 1986.

Auerbach was also hospitalized a year ago, but he was soon active again and attended the Celtics' home opener. Asked that night what his thoughts were, he replied in his usual blunt manner:

"What goes through your mind is, 'When the hell are we going to win another one?' I mean, it's as simple as that."

Auerbach had planned to be at the Celtics' opener this season, in Boston next Wednesday against the New Orleans Hornets.

In his 16 seasons as the Celtics' coach, Auerbach berated referees and paced the sideline with a rolled-up program in his clenched fist. The cigar came out when he was sure of another Celtic triumph.

Auerbach had a reputation as a keen judge of talent, seemingly always getting the best of trades with fellow coaches and general managers.

In 1956, he traded Ed Macauley and Cliff Hagan to St. Louis for the Hawks' first-round pick and ended up with Russell -- probably the greatest defensive center of all time and the heart of 11 championship teams.

In 1978, he drafted Bird in the first round even though he would have to wait a year before Bird could become a professional.

Before the 1980 draft, the Celtics traded the No. 1 overall selection to Golden State for Parish and the No. 3 pick. The Warriors took Joe Barry Carroll. The Celtics chose McHale.

In 1981, Boston chose Brigham Young guard Danny Ainge in the second round. Ainge was playing baseball in the Toronto Blue Jays organization at the time, but was freed after a court battle to play for the Celtics.

Born Arnold Auerbach in Brooklyn, N.Y. on Sept. 20, 1917, he attended Seth Low Junior College in New York and George Washington University. His playing career was undistinguished. In three seasons at George Washington he scored 334 points in 56 games. He would often attend games at GW's Smith Center, where the court is named in his honor.

As a coach, he was an instant success, posting the best record of his career in his first season. He led the Washington Capitols to a 49-11 mark in 1946-47, the NBA's debut season, and took them to the playoff semifinals.

The Capitols had winning records the next two seasons under Auerbach, who moved on to the Tri-Cities Blackhawks for one season in 1949-50. They had a 28-29 mark, Auerbach's only losing record in 20 years as an NBA coach.

In the NBA's first four seasons, the Celtics never had a winning record. But Auerbach changed that dramatically when he succeeded Alvin "Doggy" Julian as Boston's coach for the 1950-51 campaign.

They went 39-30 that year, and the Celtics never had a losing record in his 16 seasons on the bench. Boston's lowest winning percentage was .611 in his last 10 seasons.

On Feb. 13 of that season, Auerbach was honored at halftime of a loss to Los Angeles at Boston Garden.

"They say that losing comes easier as you grow older," he said after the game. "But losing keeps getting harder for me. I just can't take it like I used to. It's time for me to step out."

Russell became player-coach the next season, while Auerbach concentrated on his job as general manager. Russell was the first of five Boston coaches who had played for Auerbach.