Accessibility links
Underwater Pumpkin Carvers Vie for Top Honors Conventional pumpkin carving just isn't enough for some people. For the Mountain Sharks Dive Club of Missoula, Mont., it's just the start. At its premier underwater pumpkin-carving event, held Sunday, nearly a dozen divers sank to the bottom of the Blackfoot River to test their manual dexterity.

Conventional pumpkin carving just isn't enough for some people. For the Mountain Sharks Dive Club of Missoula, Mont., it's just the start. At its premier underwater pumpkin-carving event, held Sunday, nearly a dozen divers sank to the bottom of the Blackfoot River to test their manual dexterity. 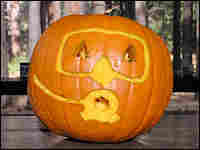 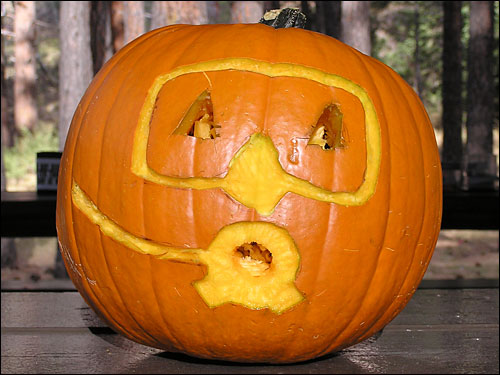 I'm Robert Siegel, and this is ALL THINGS CONSIDERED from NPR News.

BLOCK: If you're hunkering down with a jack knife and a pumpkin tonight, imagine trying to do your carving underwater on a scuba dive in 41 degree water. Well, ten divers took on the challenge yesterday near Missoula, Montana, in the Black Foot River. It was the Mountain Sharks Dive Club's first underwater pumpkin carving contest.

Kevin Mackaman was the self-described dive master, beach master and pumpkin gatherer for the event. And Kevin, how did it go?

BLOCK: And what were the rules for underwater pumpkin carving?

Mr. MACKAMAN: The main rules were that you had to practice safe diving, which means that we had to have at least two people in a group carving pumpkins. And you had to be totally submerged under the water. That meant both you and your buddy and the pumpkin. You couldn't bring the pumpkin to the surface and carve it. You had to use strictly a dive knife. Couldn't have any butcher knives or anything like that.

There was no time constraints to the event. The only constraint there was was that you had to be able to carve your pumpkin within the time it took to breathe out a 80 cubic foot tank. Again, back to the safe dive practices, that you had to surface with 500 psi left in your tank.

BLOCK: So how long were people down there?

Mr. MACKAMAN: The average was about 35 minutes.

BLOCK: And how far down did they go?

Mr. MACKAMAN: They were in anywhere from about six to twelve feet of water.

BLOCK: I was wondering if there were any special challenges that popped up for people who hadn't tried carving underwater before?

Mr. MACKAMAN: Yeah. There was a host of things. First, there was a bit of a current down there, so you had to fight the current. Your pumpkin was always constantly trying to get away from you because it was positively buoyant, so it wanted to come to the surface. And -

BLOCK: They do have a life of their own.

Mr. MACKAMAN: They do have a life of their own. And so you have to really have a lot of weight on yourself and on the pumpkin in order to keep it down on the bottom so you could actually carve on it.

Mr. MACKAMAN: Two people. Their names are Bonnie Stelzineuler(ph) and Ken Clisby(ph). They won the category of the best scuba design. And I don't know if you're familiar with the show Castaway, but there was a little ball in there called Wilson?

BLOCK: Oh, the movie? The Tom Hanks one.

BLOCK: What was the prettiest pumpkin?

Mr. MACKAMAN: You know, it had some sharks and it had some sea stars on it. And it had a face of a scuba diver on it. It's very difficult to actually get the design you want underneath there. So when I say prettiest, it really wasn't going to enter a beauty contest or anything.

BLOCK: A little bit crude in the execution?

Mr. MACKAMAN: A little bit crude in the execution, yes.

BLOCK: Well, what do you think? Are you going to be trying this again next yet?

Mr. MACKAMAN: Yeah. We'd like to make it an annual event. I think it was a very good turnout and we had a lot of fun doing it and I'm sure we can, we'll have a much better turnout next year.

BLOCK: Well, Kevin Mackaman, it's good to talk with you. Thanks so much.

BLOCK: Kevin Mackaman is president of the Mountain Sharks Dive Club in Missoula, Montana, where they held their first underwater pumpkin carving contest yesterday. The water was 41 degrees.