Accessibility links
Gay Couple Chooses Five Black Sons to Start Family In the United States, the number of whites adopting black children is growing. A rising number of those adopting are gay and lesbian. But not everyone in the black community is pleased. 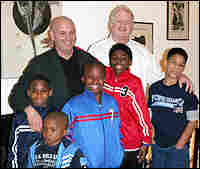 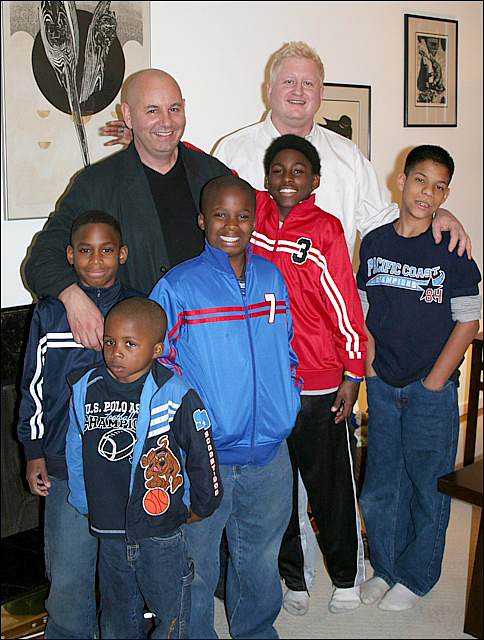 Stillman White (left) and Gregory Stewart with their adopted sons.

In the United States, the number of whites adopting black children is growing. A rising number of those adopting are gay and lesbian. But not everyone in the black community is pleased.

About half of the 100,000 kids waiting for adoption are African-American. African-American boys wait the longest to find families. Most desired are babies and young kids who haven't been mistreated or don't have disabilities.

When Gregory Stewart and Stillman White decided to adopt, the gay couple left all their options open. In fact, they specifically asked for children who were hard to place.

The first of their five sons to arrive was 3-year-old Allen. He'd been kicked out of preschool and threw tantrums. A year later, they took in Allen's 19 day-old brother, David. He came with a bottle, one change of clothes and a thick head of black hair. Four months later, 7-year-old Arthur arrived. He'd been in 14 different homes, including three failed adoptions.

One year later, Stewart and White got yet another call. Would they take in just two more, another set of brothers? By 2002, all five adoptions were final.

Some in the black community object. For the past 30 years, the National Association of Black Social Workers has condemned transracial adoption. Other organizations, such as Black Administrators in Child Welfare, say putting kids with other family members should be considered first.

Jill Jacobs, executive director of the Oakland-based Family Builders by Adoption, sees it differently. She says the gay community is meeting the needs of foster care kids like no other.

"They don't have this Ozzie and Harriett notion of what a family should be and how kids should come and don't necessarily have a need for newborn babies," Jacobs says. "So they kind of have a blank slate and they walk in the door and we can this is what we need, these are the kids we have. And we say would you, could you? And they say, 'Yes.'"