Accessibility links
Is Rove's Election Confidence Warranted? Presidential adviser Karl Rove, an architect of Republican political strategy, says he's confident his party will hold both chambers of Congress. He says that despite public polls that show Democrats have a strong chance of winning. Why is Rove publicly confident?

Presidential adviser Karl Rove, an architect of Republican political strategy, says he's confident his party will hold both chambers of Congress. He says that despite public polls that show Democrats have a strong chance of winning. Why is Rove publicly confident?

Some recent political fireworks came from presidential adviser Karl Rove. The architect of Republican political strategy says he is confident that his party will hold both chambers of Congress. He says that despite some polls that showed Democrats leading. And incidentally, plenty of Democrats are anxious, too. Let's find out why from NPR's senior Washington editor, Ron Elving.

Ron, thanks for coming in this morning.

INSKEEP: Why did Karl Rove make that prediction now, as the election approaches?

ELVING: One explanation, certainly the simplest, is that he is spinning. He's trying to keep everyone's spirits up, rally the troops, that sort of thing. You may remember, Steve, that on Election Day 2000, Karl Rove was walking around with the president - or not at that time the president, the governor of Texas. And when people were asking him, Karl, are you seeing any numbers? What are you seeing? He was smiling and saying, Bush, big.

Well, as you do remember, Steve, it wasn't Bush, big. In fact, Bush lost the election in the popular vote by half a million votes and it was five weeks before the Supreme Court gave him the Electoral College.

INSKEEP: I'm also remembering 2004, when it looked on Election Day, the early exist polls seemed to suggest that the president would lose. And Rove was calling people and saying, no, wait a minute; we're going to win this one.

ELVING: Absolutely. So it could just be a show of confidence in that particular fashion. However, I would not suggest that he is just blowing smoke. I think he might if he had to, but it's also quite possible he believes an awful lot of what he's saying about this particular election. And that's what's driving the Democrats to distraction.

INSKEEP: Well, what information does Karl Rove have that other people have overlooked when they've predicted Democratic gains this year, or victory this year?

ELVING: Well, surely he looks at more data than most people do. He has access to a lot of data that most people don't or down to the precinct level, house-by-house, practically. But beyond that it's not just how much data he sees. It's how much he sees in it. And a lot of what he sees in it allows him to discount it or to hedge it, as an investor might say. He knows that late advantages that he has like money and his turnout machine, which is extraordinary, is going to allow him to offset a certain amount of polling edge. So races where Democrats are up by several points may look quite winnable to Karl Rove.

INSKEEP: They can shave those last few points, or they think they can in the last few days.

ELVING: That what he means I think in some respects when he says he's seen the math.

INSKEEP: Hmm. Well, now, Ron. We just heard Luke Burbank reporting on President Bush's trip to Texas. What can we learn from the president's travel schedule in the last few days?

ELVING: I think that his schedule shows that they're not fooling themselves in the White House. They know that the president's greatest value is in rallying the faithful. And so they're going where the faithful live, where they know they'll be well received. And they also know that the president can be a net negative in some of the states right now, and they're better off avoiding those states. So while in 2000 or 2004, the president wound up the campaign in Ohio and Pennsylvania and Michigan and Wisconsin, this week he's going to be in Georgia and Texas and Nevada and Montana.

Now, there aren't as many House seats in those states.

INSKEEP: That are up for contention.

ELVING: That is true. That are up for contention this year. But it is a place -those are places where the president can do his party some good.

ELVING: Yeah. And that's more evidence really that they know where the real races are. The first lady will get you good media coverage, and she doesn't make people think about Iraq. So, once again, smart politics on their part.

INSKEEP: And by the way, you can read Ron Elving's column, Watching Washington, at npr.org. 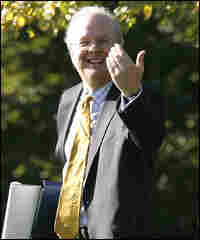 That's It. Closer, Closer... Karl Rove gestures to a reporter as he walks toward Marine One on the South Lawn of the White House. Mark Wilson/Getty Images hide caption

Republicans expect to lose ground, and their bottom line is to maintain control in both chambers, even if only by the slimmest of margins. Their mood tends to be somewhere between grimly hopeful and resigned.

The Democrats, meanwhile, are staring at what could be their best congressional election in 14 years. And they're terrified. They're afraid they'll blow it. Or some event or some person will come along and spoil it.

Someone like Lucy pulling the football away in Peanuts. Tom Toles' cartoon in The Washington Post has Charlie Brown as a Schulz-style Democratic donkey gazing at a football held by Lucy, whose shirt reads "VOTERS."

"I have you ahead in the polls by substantial majorities," Lucy says, and little donkey Charlie Brown looks back at her in bleak despair.

One focus of the Democrats' fear is a familiar one. It is the figure of Karl Rove, much slimmed from earlier election cycles -- thanks to a liquid diet -- but as frightening to Democrats as ever. This was the man who took George W. Bush from his days as an oil and baseball guy and presidential son to the Texas governor's mansion and the White House.

If that were not enough to ensure his place in the Handlers Hall of Fame, Rove is also widely credited with masterminding a national party makeover that threatened to enthrone the GOP as "the permanent majority." He loves to cite the models of President William McKinley, who won two terms at the turn of the last century, and Mark Hanna, McKinley's backroom maestro.

Rove was not directly a part of the Republican congressional triumph of 1994, but he helped maintain and expand those majorities in 2002 and 2004. It was in these cycles that Rove perfected his turnout machine, which pros in both parties now speak of in hushed tones.

Relying on sophisticated, computerized voter-targeting and swarms of contact people working the final 72 hours of the campaign, Rove's machine can erase multiple points of polling margin in important races. It costs millions, but Rove raises money with the best of them -- including powerful officeholders.

So going into the final week with this apparatus going full throttle, Rove can go on the air sounding so assured that he gets Democrats everywhere talking to themselves. When he says his math -- "THE math" -- shows his candidates winning, he means it. He's reading the polls the way they make sense to him, based on how past polling has matched up against the assault of his 72-hour juggernaut.

And then there are the darker scenarios, of course, bruited about on talk shows and blogs. Some say Rove has "an October surprise" coming that will change everything (even if it doesn't come until November). Others insist the Republicans have already rigged enough voting machines to ensure their victory. This much is clear: Rove has already gotten way inside the Democrats' heads.

Now mind you, even if a White House strategist foresaw his party losing, he would say something different. He would have to. A major component in any winning campaign's endgame is the full faith of all those involved -- everyone from the president and party chiefs to the candidates and their volunteers. You've gotta believe, and

Rove can supply a lot of that belief just on his sunny smile and outsized reputation for success.

A reputation of such magnitude can be quite useful. When the Allies invaded Normandy in June 1944, the Germans held back their counterattack. They were sure the real invasion was to come later and to be led by U.S. Army General George Patton. The Allied high command had gone to great lengths to convince the Germans of this, but what really sold the ruse was the Germans' obsession with Patton.

On the evidence of recent days, Rove has the Democrats just that spooked.