Accessibility links
A Classical Pianist Who Never Showed Off Though her process might be described as methodical, even obsessive, pianist Iren Marik isn't chilly or scholarly in performance; she's just someone who thought about the shapes and tones individual pieces of music should convey. Marik gets at exactly what's needed to bring each piece alive and adds nothing more.

A Classical Pianist Who Never Showed Off

A Classical Pianist Who Never Showed Off 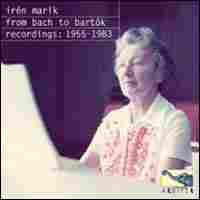 Where does Iren Marik's work fit in relation to that of her peers? How do her readings of Bach, Beethoven and Bartok compare to other 20th-century interpretations?

"Consolation No. 3 in D Flat" by Franz Liszt

"Dance in Bulgarian Rhythm No. 2" by Bela Bartok

Hungarian pianist Iren Marik (1905-1986) was one of many European musicians whose careers were thrown into disarray by WWII. She left Hungary in 1946, just as the Soviets were moving in, and after several stops, she settled in the desert near Death Valley, California. Though she had a top-shelf pedigree — she'd studied at Budapest's Liszt Academy and for a time with composer Bela Bartok, from whom she later said she'd learned little — the pianist abandoned her concert career in order to teach.

But Marik didn't stop playing the piano. She continued to practice (sometimes seven hours a day), recorded occasionally in studios and gave informal concerts for friends. These were frequently recorded, by Marik and others, for purposes of study. A first volume of Marik's interpretations was released to critical acclaim in 2004; From Bach to Bartok, which arrived earlier this year, includes pieces by Bach, Beethoven and Bartok, as well as others she'd worked on in private for years. The 1955 reading of Beethoven's Piano Sonato No. 32, Op. 111, is one of 16 versions of the piece found in her archive. She's known to have recorded much of Liszt — whose gorgeous arpeggio study "Consolation No. 3 in D Flat" (audio) closes the second disc — several times, as well.

Though her process might be described as methodical, even obsessive, Marik isn't chilly or scholarly in performance; she's just someone who thought about the shapes and tones individual pieces of music should convey. When she renders a melody, her thoughtful placement of the notes contains hints of the piece's overall structure, with a sense of how subsequent themes should be handled. The opposite of a showoff, Marik gets at exactly what's needed to bring each piece alive and adds nothing more: The solemn chords that open her treatment of J.S. Bach's "Organ Prelude in G" (audio) signal what's ahead, both structurally and emotionally. Her version of Bartok's "Dance in Bulgarian Rhythm No. 2" (audio) is even more taciturn: While keeping the composer's pulsating syncopation alive in the background, Marik scampers through motifs of stunning intricacy, making each vivid, communicating an understanding of how every little episode fits into the whole. Though the piece lasts just over a minute, it's the product of an exhaustive, under-the-microscope analysis, the kind an artist undertakes not because there's fame or fortune on the other side, but for the sheer love of the music.