Accessibility links
Elephants Have a Concept of Self, Study Suggests A study titled "Self-Recognition in an Asian Elephant" has found that elephants, like humans, chimpanzees, and dolphins, recognize themselves in mirrors. Robert Siegel talks with Joshua Plotnik, a gradate student in psychology at Emory University's Yerkes National Primate Research Center, who co-authored the study.

Listen
Elephants Have a Concept of Self, Study Suggests

A study titled "Self-Recognition in an Asian Elephant" has found that elephants, like humans, chimpanzees, and dolphins, recognize themselves in mirrors. Robert Siegel talks with Joshua Plotnik, a gradate student in psychology at Emory University's Yerkes National Primate Research Center, who co-authored the study. 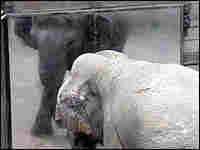 Happy, an elephant at the Bronx Zoo, looks at her reflection in the mirror. Diana Reiss, Wildlife Conservation Society hide caption 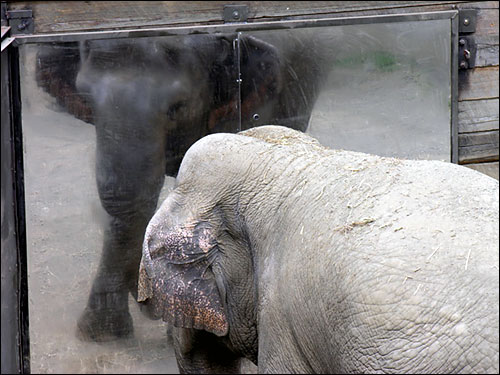 Happy, an elephant at the Bronx Zoo, looks at her reflection in the mirror.

Some animals are smarter than others. You can train a dog to play catch or sniff out certain smells. You can teach dolphins and sea lions to dance and do tricks. But it seems that the true test of animal intelligence is vanity - can an animal recognize himself or herself in a mirror.

Like humans, chimps and dolphins have shown some signs of mirror self-recognition, which we learned today is called by those in the know MSR. And we have also learned that elephants have been shown to belong to that same elite circle.

Joshua Plotnik joins us now. He's a graduate student in psychology at Emory University's Yerkes National Primate Research Center. And, Joshua Plotnik, you're an author of the article that describes work done at the Elephant House of the Bronx Zoo. I'd like you to explain what you did.

Mr. JOSHUA PLOTNIK (Emory University): Sure. So the basic paradigm is you install a mirror. And what we needed for the elephants was a rather large mirror. So we constructed a huge pleximirror. So first concern is elephant safety. We want to make sure, obviously, that we don't put a glass mirror in there that would injure the elephant. But we also want to make sure that the mirror will stay in there. Elephants are extremely curious animals and like to pull at things.

So we installed a huge mirror that was about eight feet by eight feet glued to a piece of plywood, encased in steel and then bolted to a wall so that the elephants have no way to really manipulate the mirror. We would then release the elephants into the yard where the mirror was located to see how they would react to the mirror image.

SIEGEL: And the star of the class, I gather, was a 35-year-old Asian elephant named Happy.

Mr. PLOTNIK: Yes, absolutely. We tested three elephants - Maxine, Patty, as you may know those are the Andrews Sisters, and Happy. Maxine and Patty and Happy, all three of them, approached the mirror and did not do social behavior, which is extremely unique. What you expect from an animal when they're first exposed to a mirror, as we see in chimpanzees, is immediate social behavior. As if they're thinking that mirror image is another animal.

What we saw immediately was a lot of investigations. So smelling, touching of the mirror surface. Maxine and Patty both tried to actually climb the mirror wall to look up and over and behind it to see perhaps if there was another elephant there.

They then moved to what we call contingency testing behavior, which the best way to describe that is an animal moving its head in and out of mirror view as if it's asking itself, why is the animal in the mirror doing the same thing that I'm doing. And then the hallmark that we look for, the self-directed behaviors.

In humans, obviously, when you go to a mirror, you might try and pick food out of your teeth, pick a booger out of your nose, whatever you would do in front of a mirror. Chimpanzees do very similar things. Elephants, on the other hand, we weren't sure what to expect, but what we saw was one elephant, Maxine, for instance, grabbed her left ear and pulled it slowly towards the mirror as if she was inspecting it. And all three elephants did a lot of trunk in mouth displays. Taking their trunks and sticking them into their mouths.

SIEGEL: But it was Happy - you put an X on her forehead, I gather - and she did things that indicated that she knew that X was on her.

Mr. PLOTNIK: Actually we did this to all three elephants. We put a visible white face paint mark on one side of her head, and a sham mark - we call this a sham mark - and it's an invisible face mark on the other side of her head. And the reason you do this is you want to make sure that the elephant isn't touching the mark on its head just because it feels it or smells it.

And Happy in front of the mirror repeatedly touched the visible white X mark on her head more than 12 times.

SIEGEL: Now does this tell you that Happy is just a little sharper than Maxine and Patty or that there might be some elephants capable of this cognitive behavior and some not. What's the answer?

Mr. PLOTNIK: We have two hypotheses. One is that we've only tested three elephants here. In the chimpanzee literature, many, many chimpanzees have been tested and less than half of them seem to pass. So the idea is that when you demonstrate the capacity for mirror self-recognition in a species, that's the most important thing. That doesn't necessarily mean that every single individual will pass.

The other interesting idea is that chimpanzees and humans, for that matter, like to groom by taking things off their body. So you might have a piece of dirt on your arm that you would want to pick off. And elephants, they actually like to put things on their body. They're constantly dust bathing by throwing dirt on their backs and storing food on their backs.

So it's possible that although had Happy had initial interest in the mark on her face, Maxine and Patty just might have seen the mark as inconsequential.

SIEGEL: They might have been less concerned about their appearance -

SIEGEL: - than Happy. That's Joshua Plotnik, a graduate student in psychology at Emory University's Yerkes National Primate Research Center talking about the research done with elephants at the Bronx Zoo in New York. Thank you very much for talking with us.