Accessibility links
Johnny Unitas Towers Over the History of Football One of football's greatest players was quarterback Johnny Unitas. But he was more than a great player. Unitas was a unique man who towered above his contemporaries, and the stars who have played after him.

Listen
Johnny Unitas Towers Over the History of Football

One of football's greatest players was quarterback Johnny Unitas. But he was more than a great player. Unitas was a unique man who towered above his contemporaries, and the stars who have played after him.

A hundred and eleven! Well, we have a story now of another sports legend. Here's commentator Frank Deford.

FRANK DEFORD: In baseball lore, the most consequential substitution took place in 1925 when an otherwise forgotten first baseman named Wally Pipp took himself out of the lineup for a day to be replaced by a kid named Lou Gehrig, who thereupon played every game for the next 14 seasons.

Now this autumn is the 50th anniversary of the equivalent unexpected sea change in football. George Shaw was, in 1955, the number one, the very first player selected in the NFL draft by the Baltimore Colts. A year later, he was already on his way to stardom.

But then on that fateful Sunday, Shaw tore ligaments in his right knee and an unknown rookie who was often still called Uni-tas loped onto the field. Despair gripped Baltimore. Their hero was down and his substitute's first pass was intercepted for a touchdown. The Colts were creamed that day.

It was only a few weeks later, though, when someone in the Colt locker room idly wondered when Shaw would be back. Gino Marchetti, the old World War II veteran, leader of the Colts defense, looked up. Perhaps Marchetti was the first to grasp what majesty had been unleashed unawares. It doesn't matter, he declared, Unitas is the quarterback now. As John Constantine Unitas will always be the quarterback.

The saga of Johnny U is told in a wonderful new biography by Tom Callahan, and it is worth reading not only to be reminded how special was Unitas, this gallant fable of a man who seemed to drop out of nowhere, but how different it all was in football back then.

The Colts, who Unitas would soon enough make champions, were a picaresque band of carousers who still had to hold down second jobs even during the season. Unitas himself was a paint salesman. When Alan Ameche, the fullback, and his wife bought a row house, the team pitched in the fix it up. Unitas himself laid in the kitchen floor.

Upon the field it was just as radically different. The reason that there can simply never be another Unitas was because no quarterback since his era has been allowed to control the game as he did. Field general was what we called quarterbacks then, and they were just that. Unitas decided on what plays to run, plotted strategy on the fly.

It is not their fault, but as magnificent as quarterbacks like Peyton Manning or Tom Brady may be today, they simply are not allowed to command the modern game as Unitas did his. Nor it is doubtful whether any quarterback ever was as tough as Unitas or as beloved of his fellows.

There's always a faster gun, a stronger guy, a prettier girl. Only every now and then in sports or anything can you safely say, well, they'll never be another one like that. Tom Callahan's book reminds us so beautifully that Johnny U was that rare bird who came amongst us.

MONTAGNE: The book is Johnny U: The Life and Times of Johnny Unitas by Tom Callahan. The comments are those of Frank Deford. He joins us each Wednesday from member station WSHU in Fairfield, Connecticut. 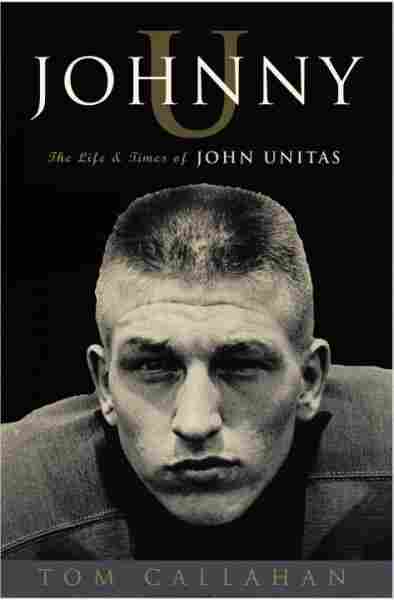 The Life And Times of John Unitas