Accessibility links
Defining the War on Terror There is considerable disagreement over whether the United States is currently engaged in a war. The phrase 'war on terror' is used almost daily, but the definition of what a war is has changed from previous conflicts.

Listen
Defining the War on Terror

U.S. soldiers hunt for Taliban fighters in the mountainous border region between Pakistan and Afghanistan. Unlike conventional wars, the "war on terror" lacks a specific battlefield, and it has led to U.S. military action in both Afghanistan and Iraq. Georgetown University historian Bruce Hoffman calls it "a war without boundaries." Paula Bronstein / Getty Images hide caption

Scroll down to see examples of more rhetorical battles fought on US soil.

Every political generation spawns a new set of terms — ideas, words, rhetoric to help explain, simplify, advance or destroy a cause. This is the third report in a five-part series exploring the political language of our times. 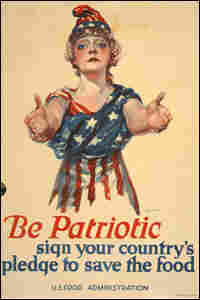 During World War II, Americans were instructed to help with the war effort. Ninety percent of the adult American population was either in the military or working in an industry on behalf of the war. Library of Congress hide caption

The term "war on terror" is ubiquitous, but the meaning of the word "war" has evolved.

For most of the last 2,000 years, war has meant something very conventional and traditional. The current war on terror, however, is a completely unconventional, non-traditional type of conflict.

Georgetown University historian Bruce Hoffman says unlike traditional wars, the war on terror does not have a clear beginning and an end.

"[War] ends with the vanquishing of an opponent, with some form or armistice or truce -- some kind of surrender instrument or document," Hoffman says.

But in the war on terror, there's no specific battlefield and the enemy isn't an army.

"It's a war without boundaries," Hoffman says. "It's a war directed against multiple enemies, not just one adversary."

A Hard War to Define

"[War can have] multiple meanings that are non-violent, because it becomes a political term meaning mass mobilization," he says.

In some respects, the war on terror is similar to Lyndon Johnson's unconditional war on poverty or Ronald Reagan's promise to win the war on drugs. All three wars are invisible and waged against the possibility of something happening. Unlike those wars, however, the war on terror isn't just a symbolic call to arms -- it has had real-world implications.

"The executive branch could consider itself in a state of war for decades and decades to come," he says. "[The language] hides many obscurities and ambiguities that lend themselves very easily to exploitation."

A Different Type of War

The war on terror has distinct messages. President Bush has instructed Americans to "go about their daily lives."

The message is different than the one from previous wars, when Americans were instructed to help with the war efforts. In World War II, 90 percent of the adult American population was either in the military or working in an industry on behalf of the war. During Vietnam, one in three males between the ages of 18 and 26 was drafted.

But in the war on terror, sacrifice is voluntary.

"We're not selling liberty bonds and growing victory gardens," says philosopher Father John Neuhaus. "But does this have a bearing on whether or not it's war? I'm not sure, [but] I don't think so. I think it says, 'it's a very strange kind of war.'"

With the exception of volunteer soldiers and their families, the war is very distant for most Americans –- and that's part of the message.

In a May 27, 2006 address at West Point Military Academy, President Bush reiterated a point he has made many times since Sept. 11, 2001: "We will stay on the offense against the terrorists, fighting them abroad so we do not have to face them here at home."

"It's certainly true the president has not succeeded in inspiring the belief that we face an existential threat," says Perle. "The problem with the term 'war on terrorism' is it leaves the enemy ill defined."

A few weeks ago, one of the president's advisors told NPR that Mr. Bush never wanted to burden the public with the war; that, in his mind, he was hired by the American people to do the job on their behalf.

Gingrich says the President is placed in an awkward position.

"I think the President is torn between reassuring us that he's managing the war and warning us that it's a real war," says Gingrich. "You have organized opponents who want to kill you -- they're gathering resources and coordinating to try to kill you -- and I think to try to describe it as anything but a war, is remarkably misleading."

The War with No End?

"It does seem to me that we are certainly at war in Iraq and we have certainly stirred up a hornet's nest," says Fukuyama. "I think the problem is that it has largely been a self-fulfilling prophecy."

It's the possibility that terrorism cannot be conclusively defeated, says historian Michael Burleigh, that makes the phrase "war on terror" a problematic term.

"Terrorism is a tactic," he says, "so it's a bit like saying the Second World War was a war against Blitzkrieg."

The endless possibility means the war on terror is, in theory, an endless war –- a war that approaches something closer to a way of life. 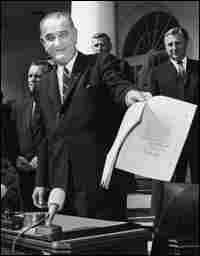 The War of 1812 began in 1812. The war on drugs, on the other hand, is more difficult to place on a timeline. Did it start in 1880, when the United States banned opium shipments from China? Or in 1971, when President Nixon declared a modern war on drugs?

Real wars have a beginning, middle and end. But war is often used as a metaphorical term as well, describing a campaign against social ills. The war metaphor is particularly useful because it sets up two distinct sides: good and bad.

Here, a list of just some of the "enemies" declared on U.S. soil:

Poverty -- President Johnson declared an "unconditional war on poverty" in 1964. The goal wasn't to reduce poverty but to end it entirely. His speech initiated a set of social reforms that later evolved into Johnson's Great Society program. His Office of Economic Opportunity launched Head Start, Job Corps and work-study grants.

Cancer – The National Cancer Act, signed into law by President Nixon in 1971, is commonly known as the "war on cancer." The act was not just a war. It was Nixon's personal "crusade" seeking the "conquest of cancer." His act expanded research facilities across the country, established an international cancer research bank, and allowed researchers to bypass the National Institute of Health's budget constrictions.

Illiteracy - The government's "war" against illiteracy began in the late 1970s, when the state of Alabama began a statewide campaign to raise adult reading comprehension levels. In 1985, Secretary of Education Bill Bennett joined the fray, unveiling a national illiteracy program created in response to journalist's Jonathan Kozol's book Illiterate America,which revealed that a third of all American adults were functionally illiterate and couldn't read the front page of a newspaper

Barbara Bush then took up the cause because her son Neil was dyslexic; her husband, son, and daughter-in-law also championed anti-illiteracy efforts. In fact, on Sept. 10, 2001, President Bush declared a new "war on illiteracy for the young" at a Florida elementary school.

Christmas – FOX News declared that department stores were waging a war on Christmas during the 2004 and 2005 holiday seasons by replacing the phrase "Merry Christmas" with the nondenominational "Happy Holidays." The Catholic League boycotted Wal-Mart for using the words "holiday" instead of "Christmas" in its store promotions and FOX urged its viewers to say "Christmas break" instead of "winter break."

Terra – The latest "war on" was created by The Daily Show with Jon Stewart. The ice caps, Stewart said, have declared a war on terra. Stewart says, "The ice caps have not melted. The water has been liberated."