Accessibility links
Muslim Women, the Veil and Western Society At a time when Western countries are increasingly engaged with the Muslim world, to what extent should the cultures accommodate each other when they are on common turf, and what does this mean for the veil? 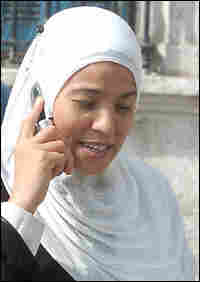 The meaning of "hijab" is curtain or partition. It is a scarf that generally covers the hair and conceals the neck. It leaves the face exposed and does not cover the bosom. Getty hide caption

The niqaab covers the hair, forehead and face, but leaves an opening for the eyes. It is particularly prevalent in South Asia. Getty hide caption

Last month, former British foreign minister Jack Straw reopened debate on Muslim women and the veil. Straw said that when women visited his office with their faces covered, he asked them to remove the veil because he believes it makes communication easier. A female staff member was always present. Some British Muslims agreed with Straw, others protested, and there have been similar debates in Italy, in France and in this country as well.

Part of the argument is over cultural standards, about what types of veils are acceptable in Islamic and in Western countries.

In many western countries, including the United States, Islam is growing fast. So to what extent should the cultures accommodate each other, and what does this mean for the veil?

Asra Nomani, author of Standing Alone in Mecca: An American Woman's Pilgrimage into the Heart of Islam

Asma Barlas, professor of politics and the director of the Center for Culture, Race and Ethnicity at Ithaca College

Graphic: Muslim Veils from the BBC