Accessibility links
Kids Learn to 'Red Light' Bad Food On a non-stop circuit of birthday parties, sports events, holidays, and grandma's special treats, kids often find themselves bombarded with unhealthy food. A weight-control program in Stanford, Calif., has come up with a "traffic-light" system to help kids make better choices about what to eat and when. 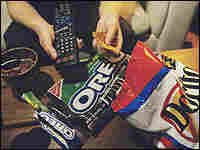 One aim of the Packard Pediatric Weight Control Program is to teach kids to distinguish between "red-light" and "green-light" foods. Mark Peterson/Corbis hide caption

Breaking the Mac and Cheese Diet

For families with kindergarteners stuck in the mac 'n cheese, chicken-finger rut, nutritionist Cindy Zedeck and counselor Thea Runyan warn that bad eating habits now could lead to problems down the road.

Scroll down for their tips to help set children free from a limited diet.

A weight-control program in Stanford, Calif., is helping significantly overweight kids -- some as young as eight years old -- understand the difference between healthy and unhealthy foods.

Over the past decade, more than 350 kids between the ages of 8 and 15 have graduated from the family-based, behavioral program at Lucile Packard Children's Hospital, which boasts an 80 percent long-term success rate. Most other weight-reduction programs have a 50 percent success rate.

The key, say program organizers, is motivating kids to change their lifestyle.

To qualify for the program, children or teens must have a body mass index (BMI) greater than the 95th percentile on the Centers for Disease Control and Prevention's growth chart. A child with a BMI greater than the 85th percentile may also be eligible, if the child's parent is overweight or the child has an obesity-related condition like diabetes or high cholesterol. At least one legal guardian must agree to attend each weekly, 90-minute learning session with the child.

Yet the parent can't make the decision for the child. Both must want to enroll. They literally sign a contract promising to come every week for six months.

"[Children have] to explain they want to do this [for] themselves," says Cindy Zedeck, an education specialist in charge of the program. "It can't be the result of pressure from the parent, because if they feel pressure or aren't clear why they're here, it won't be successful."

Stop Before You Eat Pizza

With so many high-fat, high calorie foods in so many places -- birthday parties, sports events, holiday parties, even Grandma's cookie jar -- Zedeck says it's tough for kids to make healthy choices.

The program combines an easy-to-understand traffic light system to help kids and their families understand that there are foods that should be consumed rarely. "Red light" items include cheeseburgers, chicken nuggets, whole milk and frozen yogurt. Grains, fruits, beans, meat and fish get a "yellow light," signaling they can be eaten frequently, but in moderation. Vegetables and water get the "green light."

Pediatrician Thomas Robinson directs the Center for Healthy Weight at the Lucille Packard Children's Hospital. Recently, he moved certain popular foods, such as pizza, from cautious yellow to stoplight red.

"Even if cheese pizza is categorized as yellow based on nutritional content," Robinson says, "we'd find kids would say, 'Oh, that's wonderful that it's yellow. That's our favorite food and we'll eat as much of as it we want!'"

A New Way to Shop for Groceries

Hannah Riley is one of Packard's success stories. She lost 14 pounds, a lot for a 9-year-old. Like everyone in the program, she and her mother, Julie Wheeler, received a traffic-light food guide.

It fits in Wheeler's purse and easily travels with her to the grocery store.

"One of the important things I learned in the program is how to shop for healthy foods," Wheeler says. Now, she reads labels, looking for fiber, fat and sugar content.

She's also changed where she shops in a grocery store.

"I try to shop along the perimeter of the store," Wheeler says, "because when you walk through the middle aisles, there are all the 'red lights.' All the boxed and processed foods are on the inside of the grocery store, while all the healthy, fresh foods are on the outside, things like fresh produce, dairy, eggs, meats, fish."

Now Wheeler stocks the refrigerator with fruits, vegetables, low-fat milk and dairy, and her cupboards with low-fat crackers and whole-wheat pasta.

After three weeks in the Packard weight-loss program, kids sign new contracts. They promise to reduce the number of red-light foods they eat each day and each week.

The ultimate goal, says Robinson, is to get kids "down to about seven red-lights per week."

Simple images help kids understand how bad high-fat, high-calorie foods can be. A picture of a 12-ounce tube of sugar illustrates how much sugar is in one can of soda. They also see tubes of how much sugar is in a tablespoon of maple syrup, a brownie or sugared cereal.

They're also given containers of Crisco so they can size up fat content.

"We have a worksheet that outlines how many teaspoons of fat are in certain foods," Zedeck says. "For example, maybe a hamburger at a fast-food place would have about six to eight spoons of fat. We have the kids scoop out spoons of Crisco and put it on a plate. Then they can really see how much fat they're consuming when they eat that hamburger."

Kids can then compare that hamburger to another fast-food sandwich that might only have one teaspoon of fat. And kids basically learn that when they're hungry, Zedeck says, their "best bet is to get the lower-fat sandwich, which will be just as filling, rather than a very high-fat cheeseburger."

Not only do kids in the program learn how to choose healthier foods, they learn how to be more selective about unhealthy foods.

"Some kids have even told me that they really don't even like tortilla chips; they much prefer chocolate," Zedeck says. "So if both chocolate and tortilla chips are at the party, they're going to save their red light for the chocolate. And they begin to realize certain red lights aren't even that important to them."

Hannah Riley says she doesn't even miss the red lights.

"To me, I just see the human body in my brain or something, and I see fat," Hannah says, "and it reminds me not to eat that much red lights." Or sometimes, not to eat them at all, she says.

As Hannah was meeting her goals to decrease red-light foods, she was also meeting new program goals to abandon couch potatodom. At the beginning of the fourth month in the program, kids began to tally their weekly activities. They're encouraged to get out and get active, especially with their parents, with whom they might bike or walk in the evening.

"I think my body likes exercising," Hannah says. "I can't wait till recess or lunch so I can go run and play with my friends. I like the playground, the slider and monkey bars."

Before Hannah's weight loss, her mother notes, the child couldn't play on monkey bars because "she couldn't lift her own weight."

Toward the end of the Packard program, kids begin to document their sitting habits: how much computer time and TV-watching they log. Hannah says she and her mother have really cut down on TV time.

After six months in the program, Hannah looks as if she never had a weight problem. And she's committed to keeping the weight off. She dances, she plays soccer, and, when she eats, she tries to stay away from red lights. 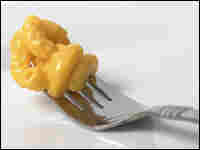 All your kindergartener craves is mac 'n cheese with a side of chicken fingers. Nutritionist Cindy Zedeck and parent coach Thea Runyan warn that bad eating habits at a young age could lead to health problems in the years ahead.

But parents of picky eaters shouldn't give up. Zedeck and Runyan, who work with the Packard Pediatrics Weight Control Program in Stanford, Calif., have tips to broaden a child's palate:

Monkey See, Monkey Do: If kids see you try new foods or enjoy vegetables, they're more likely to try a new food.

Don't Just Cook Their Favorites: Kids tend to eat too much of the foods they like best. Even though giving in to your child's demands might get your child to eat in the short term, think about the long-term health of your child. Setting limits is important. Parents should control their child's diet when he or she is young, even if it means the child may occasionally go to sleep without dinner.

Be Persistent on New Foods: Fussy eaters may refuse new foods; in fact, they will refuse. But keep giving them options, and odds are they'll eventually fold and eat. Don't give up!

Tasting Leads to Eating: Your child might not eat full servings of a new food, but you should suggest they take three little tastes. A few bites could change their mind.

Plan Ahead: The more you plan ahead, the better you will eat. Fix a batch of healthy meals on Sunday, then freeze them so they'll get you through the week. That's much better than whipping up last-minute dishes with unhealthy ingredients.

Tastes Change: What your child refused at 3, they may embrace at 3½. So even Johnny, who hates broccoli, might become a convert.

Involve Kids in Cooking: They don't like burritos. They won't even try pizza. Set up a make-your-own burrito bar (using whole-wheat tortillas) or a make-your-own pizza bar. If kids are part of the process, they're more likely to consume their creation.

Easy Doesn't Mean Unhealthy: Make favorite foods by baking instead of frying. The Packard program recommends this popular substitute for chicken fingers: Marinate strips of chicken breast in 1 percent buttermilk for 20 to 30 minutes. Cover the strips in whole-wheat bread crumbs, then bake at 350 degrees for six to seven minutes per side. Kids love 'em! Parents do, too.