Accessibility links
Can a Baby Be Too Fat? Putting on pounds quickly is normal for a baby, but putting on too many pounds too quickly is not. And it can take an expert's eye to know the difference.

Listen
Can a Baby Be Too Fat? 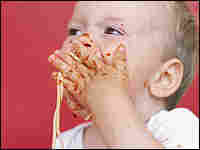 Rapidly putting on pounds is normal for a baby, but sometimes, they may be putting on too many pounds too quickly. Grace/Zefa/Corbis hide caption

On a non-stop circuit of birthday parties, sports events, holidays, and grandma's special treats, kids often find themselves bombarded with unhealthy food. A weight-control program in Stanford, Calif., has come up with a "traffic-light" system to help kids make better choices about what to eat and when.

Infants are the ultimate couch potatoes -- cooing, dimpled eating machines. But can a baby be too fat? Matthew Gillman says yes. He's a pediatrician and epidemiologist at Harvard Medical School who is looking hard at the very youngest for clues to the roots of obesity.

"Excess or accelerated weight gain even in the first four or six months of life may be setting up kids for overweight, for higher blood pressure, maybe even for asthma over the first years in childhood, " Gillman says. He's been tracking the vital statistics of well-fed babies and toddlers born and raised in eastern Massachusetts over the last 22 years. And he insists he has nothing against pot-bellied infants.

"I was a pretty chubby baby myself," he says.

Still, as a doctor, Gillman's worried. His research suggests that the percentage of children under age 2 who top the weight charts is creeping higher with every generation. A bunch of reasons underlie those extra pounds, he says, and some on the list are surprising. If a mother smokes during pregnancy, for example, she's at risk of having an extra-small newborn who then grows up to be an overweight child. Also, Gilman says that in his study, babies who didn't get enough sleep tended to pack on unneeded ounces that soon added up to unneeded pounds.

"Kids who got less than 11 hours of sleep were at more than 50 percent higher risk for developing overweight by the age of 3 compared to those infants who slept more than 13 hours a day," he says.

So what's the parent of a chubby tot to do? Don't start counting double chins.

"All babies have their baby fat until they get to 3 or 4 or 5 years old," Gillman says. "So it really is important to get an accurate weight and especially length measurements on the growth chart. That's how we compare your child to every other of the same sex and age."

It's also not a good idea to cut back on the child's calories and fat too soon, Gillman says. Cells -- especially those that surround budding brain cells -- need fat to support and nurture them. He says that's one of the reasons the American Academy of Pediatrics recommends that even after children switch from breast milk to cow's milk, they should continue drinking whole milk until they're 2 or so, and only then switch to nonfat or 1 percent milk.

The best way to keep tabs on whether your baby's weight is within normal bounds is to check in frequently with your child's pediatrician. The doctor has the experience to be able to keep an eye on overall trends in the child's growth.

"If they're gaining weight very fast," Gilman says, "that would be a key sign for later overweight and that might be a warning sign for both parents and pediatricians."

The bottom line: Putting on pounds quickly is normal for a baby, but putting on too many pounds too quickly is not. And it can take an expert's eye to know the difference.