Accessibility links
'Borat' Offends, Entertains While Mirroring Society Borat features British comedian Sacha Baron Cohen as a fictional television journalist from Kazakhstan on a tour of the United States. The satire is biting and discomforting. But it's also funny and well-suited for our times.

Borat features British comedian Sacha Baron Cohen as a fictional television journalist from Kazakhstan on a tour of the United States. The satire is biting and discomforting. But it's also funny and well-suited for our times. 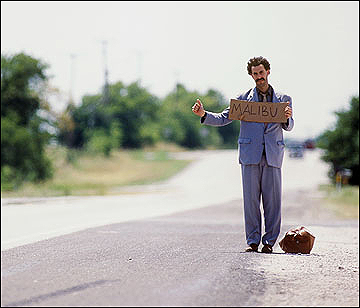 Despite the sign, our Kazakh friend's true destination is Hollywood. Is America ready?

Now here's a review of the movie that Tom Cruise missed out on. It's from the British comic Sasha Baron Cohen. His character is Borat. Los Angeles Times and MORNING EDITION film critic Kenneth Turan has been watching.

KENNETH TURAN: You will laugh at Borat, you really will. But laughter will sometimes stick in your throat. This is partially intentional, because Borat's subversive social commentary comes with an ironclad shock and offend guarantee.

Borat, or to give it its full title, Borat: Cultural Learnings of America For Make Benefit Glorious Nation of Kazakhstan, is the brainchild of British comedian Sasha Baron Cohen. He's a performer who's touched by a kind of genius so savage it makes you reconsider the very nature of comedy.

TURAN: Borat Sagdiyev is a fictional television journalist from Kazakhstan, a real country but portrayed here as a hotbed of racism, sexism, anti-Semitism and all around inappropriate behavior. Borat is such a product of his politically incorrect culture that his actions are intended to make us question aspects of our own.

The film is a kind of documentary, recording Borat's adventures in what he calls the U.S. and A., with each episode intended to be more outrageous and potentially offensive than the last. We don't laugh at all of this, but we laugh at more of it than would seem possible, in part because of Cohen's powerful comic gifts.

This is a very smart guy with the innate likeability all comedians have to have. And he submerges himself so deeply into his Borat persona, you wonder if he could come up for air even if he wanted to. But because almost no one in the film knows that Borat is putting him or her on, our laughter also makes us uncomfortable. We laugh out of astonishment and disbelief, out of embarrassment for what the people onscreen are going through, and because we simply can't figure out any other way to respond.

Cohen's corrosive brand of take no prisoners humor scalds on contact and makes him the most intentionally provocative comedian since Lenny Bruce and the early days of Richard Pryor. But because he is willing to mock whoever crosses his path, he ends up baiting the harmless and playing ordinary people for fools, just because they are gullible and have the bad luck to run into him.

Unlike his predecessors, there is a mean spiritedness, a lurking every-man-for-himself coldness about this humor. Brilliant and funny though he his, Sasha Baron Cohen and his love of transgression and humiliation are finally very much of and about our time. We deserve each other, and we might as well laugh. 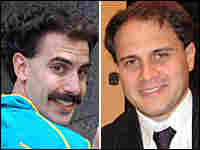