Accessibility links
Grandma's Veggies May Have Been More Nutritious That broccoli stalk in your hand may not be as nutritious as the one your grandmother ate growing up. Recent studies have shown that vegetables grown today contain fewer nutrients than vegetables grown in 1950.

Listen
Grandma's Veggies May Have Been More Nutritious

Even if you're not sure which broccoli stalk on the shelf is the healthiest, you can definitely choose wisely when deciding which vegetables to eat.

Ann Y. McDermott, a nutrition researcher at Tufts University, explains certain vegetables are more nutrient-dense than others. "It's a way of getting more bang for your buck," she says, "because you're getting more nutrients per calorie."

Here, McDermott's four rules for picking vegetables that will ensure you're getting the most out of your meal.

You should try to have as many different colors of vegetables on your plate as possible. "Each color will contain different nutrients," says McDermott. Similar colors provide similar amounts of vitamins and minerals. So if you're choosing between sweet potatoes, pumpkin, and greens this Thanksgiving, choose an orange and the green.

Darker leaves contain more nutrients, says McDermott. Choose romaine over iceberg, and spinach over romaine. And don't be too concerned about the recent E. coli outbreaks in spinach. "The benefits of eating spinach outweigh the risks," McDermott says. "Spinach contains iron, folate, and all sorts of vitamins."

The Brighter, The Better

If you're trying to pick tomatos off a grocery store shelf, go for the bright red ones. "The brighter a vegetable," says McDermott, "the more nutrients it contains." Look for a deep, vibrant color instead of an off-red. The same rule applies to peppers, apples, and summer fruits.

McDermott says that many veggie-lovers discount white vegetables. "White vegetables, like cauliflowers, contain phytochemicals which have been shown to have numerous health benefits," she says. Other white veggies include potatoes, onions and jicama. 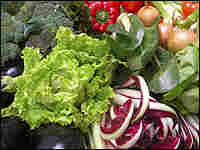 If you're looking for evidence that today's mass-produced vegetables don't quite measure up to those your grandparents ate, you can find it in data published by the US Department of Agriculture.

For more than a century, the USDA has measured levels of vitamins and minerals in American food. Donald Davis, a researcher at the University of Texas, compared the USDA figures from 1950 and 1999, for 43 common fruits and vegetables.

"Of the 13 nutrients that we were able to study, we found statistically reliable declines in six of the 13," he says. Levels of other nutrients stayed roughly constant over the years.

But a big word of caution: USDA nutritionist Joanne Holden says those 1950 numbers may not be trustworthy. For one thing, measurement techniques have changed, possibly changing the results. In addition, she says, no one knows whether the vegetables measured in 1950 were an accurate sample of the American diet.

It took until 1997 for the USDA to apply what could be called modern polling techniques to the analysis of food. At that point, the agency began gathering random samples of produce from supermarkets across the nation. USDA nutritionist David Haytowitz says USDA vegetable buyers follow strict rules to ensure the sample is truly random.

"We don't want them picking one off the top, because in the stores, they'll put the best ones on top," says Haytowitz. "We want an average one, a representative one."

This is important, because individual vegetables can vary enormously. The USDA found that some cantaloupes have four times more vitamin A than other cantaloupes.

University of Illinois plant geneticist John Juvik discovered that some stalks of broccoli had 40 or 50 times more glucosinolates -- compounds that can help prevent cancer -- than others.

Vegetables can vary widely because of their genetic makeup and their environment. Juvik says plant breeders, until recently, didn't pay much attention to nutritional quality when they created varieties of vegetables.

While many farmers and food companies may not know the best way to grow nutritious crops, it doesn't mean you should stop eating your fruits and vegetables.

Davis reminds people that the decline in nutrients in American produce is nothing compared to what people do to themselves.

"If you're really concerned about loss of nutrients in your diet," he says, "you probably ought to be looking first at how much of your calories are coming from added sugars, fats, and white flour and white rice."