Accessibility links
Mose T's Art Was an 'Outside' Job Folk artist Mose Tolliver's subjects were nature, people and animals. His medium was house paint. His canvasses were cabinet doors and discarded table tops. His paintings put him at the forefront of the Outsider Art movement.

Listen
Mose T's Art Was an 'Outside' Job 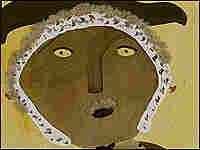 Self-portraiture was a common theme in Mose Tolliver's paintings. In many of his self-portraits he is shown with crutches. Tolliver went as far as using his own hair in his work, which can be seen in this painting, Self-Portrait. Smithsonian American Art Museum hide caption 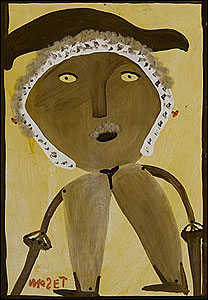 Self-portraiture was a common theme in Mose Tolliver's paintings. In many of his self-portraits he is shown with crutches. Tolliver went as far as using his own hair in his work, which can be seen in this painting, Self-Portrait.

Folk artist Mose Tolliver's subjects were nature, people and animals. His medium was house paint. His canvasses were cabinet doors and discarded table tops. His paintings began as a release from depression and drink, but put him at the forefront of the Outsider Art movement.

Tolliver died this week. Born in 1920 to an Alabama sharecropper, he left school after the third grade. He spent much of his early life working to support a growing family that eventually included 11 children. Then an accident at a furniture factory left him unable to do manual labor.

Starting in the 1960s, Tolliver began painting, hanging his work in his front yard, selling them for a few dollars each. He signed them "Mose T," with a distinctive backward "S."

Today, many of those paintings are valued in the thousands of dollars. He was discovered by the world outside Alabama when his work was featured in a 1982 exhibition of Black American Folk Art at the Corcoran Gallery in Washington, D.C.

His paintings hang today at the American Folk Art Museum in New York, the High Museum of Art in Atlanta, the Milwaukee Art Museum, the Smithsonian Institution and the New Orleans Museum of Art.

His painting style often featured the same images of self-portraits (often featured with crutches), birds and watermelon. Sometimes he incorporated locks of his own hair.

A Conversation with Mose Tolliver

A Conversation with Mose Tolliver

In 1995, Scott Simon interviewed artists associated with the "Outsider" school -- including Mose Tolliver and his daughter, Annie -- for Weekend Edition Saturday. The following is a partial transcript:

Simon: Annie Tolliver, a 45-year-old mother and ex-wife, creates at a small table in the small hall leading out of her kitchen door, paints in bright house siding colors on plain, solid slats of wooden board.

What is that, Ms. Tolliver, can I ask?

Annie Tolliver: It's the devil beating his wife.

Simon: Oh my. What made you think of that as a theme?

Annie Tolliver: When it used to rain and the sun be out, I always heard my mother say, 'Well, the devil beating his wife.' He's a mean guy.

Simon: Ms. Tolliver is a large woman, frosted hair, who lives in a neighborhood of Montgomery that local developers might call low-income. Shuttered windows flare out from many houses, steel bars stand sentry outside panes and shuttered doors. But Annie Tolliver's hallway and dining hallway amount to an art gallery, if not a museum. Paintings stud the walls, up and down, 10 and 12 in line, each finished with a small white price tag curling in the lower right hand corner- $40, $60, $100, $250.

Annie Tolliver loves animals. She paints them as gently smiling companions turning up their faces to the hands and faces of humans. She paints her family, friends and a dog at her birthday party. She paints her family fishing and one of her brothers, a son and a cousin, in prison, all looking out with set, solemn faces between the slats of jail house bars.

Simon: Mose Tolliver -- Mose T -- is his own best character. He's 75 years old this year and pretty much confined to his sway back bed, set up in the living room of a house not far from his daughter's in Montgomery. Mose T has short, curly gray hair he's been known to paste into his "Adults Only" paintings.

Some of his best-selling images though are what he calls his moose ladies, women riding bicycles, spread-legged, in a suggestive manner. In the kitchen, Mose T keeps a collection of pop-tops from beer cans, which he attaches to his paintings, the Mose T version of matting, framing and hanging.

He receives us in bed, wearing a pair of khaki trousers, splotched with paint. In the late 1960s, he was working in a local shipping room, when a crate of marble slabs fell onto his legs. The accident that cut short his career in storage cut loose his gift for art. The owner of the furniture company had seen Mose sketch out basic pictures and encouraged him to take up painting.

Mose Tolliver: I said, 'I ain't got no paint.' He said, 'I'll give you the paint.' I said, 'I ain't got no brushes.' He said, 'I'll give you the brushes.' And he give me a lot of brushes and a lot of paint and I still didn't mess with it. I hated the stuff then. And so one day I [was] sittin' on the front porch and I seen a redbird up there on the tree and I got my paint out and I painted it. I worked on it about four or five weeks. And he came by here, he asked me, said, 'How you gonna know when you get your picture right?' I said: 'When somebody buy it.'

Simon: "When somebody buys it" seems to be Mose T's personal definition of art, although when he began painting more than 25 years ago, he didn't even think to sign his pieces. After all, he knew that he painted them. He keeps a picture his daughter Annie painted for him for a recent birthday, but Mose added a price tag and says he'd sell it. Mose T would not only sign and sell his undershorts, he has.

Simon: Mose T, on the other hand, to take him at his word, doesn't seem like a man pursuing a vision so much as a clear-eyed discovery. People will pay for almost anything with his name on it. Art hasn't made him wealthy, but it has favored him in other ways even more improbable. He remembers a New York art dealer who saw several washed pairs of Mose T's undershorts drying on a bush in front of his house.

Mose Tolliver He said, 'Could you let me have a couple pairs of 'em?' I said, 'Yeah, I'll let you have 'em if you want 'em.' He went out there and go three pair and brought 'em and I signed.'

Simon: You signed your undershorts? Did he buy them from you?

Mose Tolliver: Yeah, he bought. He carried 'em up there in New York. He had a art gal.'

Mose Tolliver: And they bid on 'em.

Simon: They bid on your undershorts?

Simon: Of which Mose T received $75. Not bad for an old pair of undershorts, surely, but it does point up the concern that there are big city art dealers from New York, Atlanta and elsewhere, who make more off the sale of outsider art than the people who created it in garages and on kitchen tables.