Accessibility links
Saddam Hussein Sentenced to Death Former Iraqi leader Saddam Hussein and two co-defendants are sentenced to death for war crimes and crimes against humanity, including murder. The trial involved the deaths of 148 Shiite Muslims in Dujail.

Former Iraqi leader Saddam Hussein and two co-defendants are sentenced to death for war crimes and crimes against humanity, including murder. The trial involved the deaths of 148 Shiite Muslims in Dujail. 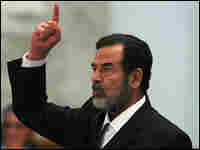 Saddam yells at the court as he receives his sentence. AFP/Getty Images hide caption 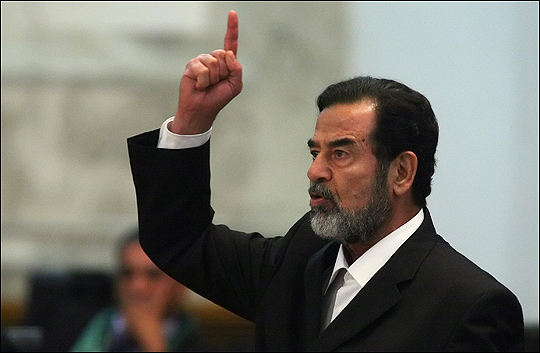 Saddam yells at the court as he receives his sentence.

From NPR News, this is WEEKEND EDITION. I'm John Ydstie.

Saddam Hussein was sentenced to death today. His half-brother and former intelligence chief, Barzan al-Tikriti, and the former chief judge of the Revolutionary Court, Awad al-Bandar, were all convicted of crimes against humanity and sentenced to death by hanging. One other defendant was acquitted. Three other lower level officials each received sentences of 15 years in prison. They were all on trial for the massacre of 148 villagers from the town of Dujail, after Saddam survived an assassination attempt there in 1982.

Here, the judge begins to read the verdict to Saddam, who looked shaken as he was forced to stand.

YDSTIE: The court decides to sentence Saddam Hussein to death by hanging for committing willful killing as a crime against humanity, said the judge. You can hear Saddam shouting, long live the people, long live the nation, down with the occupiers, God is great, God is great.

NPR's Jamie Tarabay joins us from Baghdad. Jamie, describe to us what happened in court today.

JAIME TARABAY: Well, it all happened rather quickly. I think it took about 30 minutes for all the judgments to be read. The defendants were brought in one at a time, beginning with the lowest level defendant, Mohammed al-Azawi, who was acquitted and immediately taken away. Then three other officials were brought in at the same time, the ones who received the 15 years in prison. And then eventually Saddam and his half-brother, Barzan Tikriti, came out.

Saddam looked very nervous. He didn't want to stand and he told the judge, you know, he would listen to the verdict sitting down. But he was forced to stand. And then once the verdict was read out, as you heard, he objected and he began calling out in that way.

The demeanor of all the men was very, very different to what we've seen in past sessions of the court. They all looked very defeated, very broken, and they were very resigned to their fate today.

YDSTIE: Has there been any reaction outside the courtroom, in the streets of Iraq?

TARABAY: We've seen a lot of celebrations in Shiite areas in Iraq, even just here in Baghdad, where there is a curfew. Once the verdict was announced on television here and the death sentence read out for Saddam, we just heard rapid bursts of automatic gunfire. People are out in the streets, particularly in Shiite areas like Sadr City, dancing, chanting, just celebrating the fact that Saddam and three of his men have been sentenced to death.

YDSTIE: How about on the Sunni side?

TARABAY: In the Sunni neighborhoods in Baghdad, in Adbamiya, there have been some gun battles going on. The rest of the country in Sunni provinces like Salah ad Din, Diala, al-Anbar, places where, you know, in Tikrit - in Saddam's hometown - there was one very angry demonstration there. We are also hearing angry reactions from a lot of the Sunni politicians, Sunni lawmakers. Salah Hamutlak(ph) said the consequences of this verdict would be the deaths of thousands of people.

YDSTIE: This verdict and sentence isn't the end of the process though, right?

TARABAY: That's right. It's an automatic appeal for any life sentence and any death sentence. And that goes straight to an appellate chamber, where there are nine new judges who will be looking at the judgments. And they could take as long as they need to decide and agree. But within - once they have made that decision - it could be weeks, it could be months - they then, there basically has to be - the judgment has to be carried out within 30 days of their announcement.

So we're still waiting. Nothing's been set yet. And they could even come back and reduce the sentences.

YDSTIE: NPR's Jaime Tarabay speaking to us from Baghdad, where Saddam Hussein was sentenced to death today.