Accessibility links
Lila Downs' Cross-Border Musical Influences The Mexican-American singer turns the bitter experience of immigrants into music full of life. Her influences include traditional Spanish ballads and jazz from the American songbook. 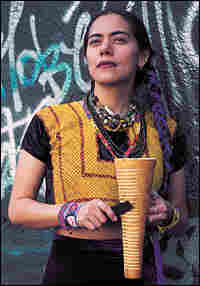 "I can't say that I don't feel American when I am singing a song in Spanish, because it's part of who I am at all times," Lila Downs says. Tom Le Goff/Liaison Agency hide caption 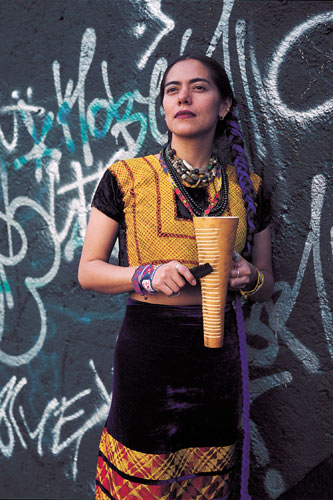 "I can't say that I don't feel American when I am singing a song in Spanish, because it's part of who I am at all times," Lila Downs says.

One day while she was working in her mother's shop in Oaxaca, Mexico, a man came in and asked Lila Downs to translate his son's death certificate. Downs, who is bilingual, read the document, which said the young man had drowned while trying to cross the border into the United States.

"It just made such an impression on me that I started to write songs about these stories," Downs tells Steve Inskeep.

Her new CD, La Cantina, features such stories, including "El corrido de Tacha 'La Teibolera,'" a song about a teenage girl who escapes from a forced marriage, only to work as a table dancer.

Downs is the daughter of a Mexican-Indian mother and an American cinematographer/biologist from Minnesota. She grew up listening to American jazz greats, including Ella Fitzgerald and Sarah Vaughn, and learned to perform jazz alongside her own songs in crowded American bars.

"I like to believe that I feel my music profoundly," Downs says. "And you know, I think it's interesting that jazz has taught me to feel the music in a more spiritual way. And then I came back and did my Mexican songs in a different way as well. So they both have been... feeding one another."