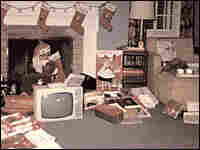 From The Shepherd, the Angel and Walter the Christmas Miracle Dog. Barry's latest is a humorous look at Christmas 1960, in suburban New York. hide caption

This holiday season, Dave Barry offers a classic Christmas story. Only with a few unclassic elements, like a Betsy Wetsy Jesus Doll and a canine corpse.

Barry talks about why he decided to write The Shepherd, the Angel and Walter the Christmas Miracle Dog, a "quasi-autobiographical" tale set in 1960 in the New York suburb of Asquont. Read on for his chat with NPR's Neal Conan and an excerpt from the book. 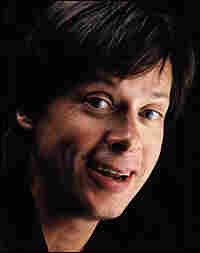 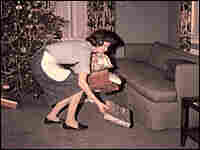 Dave Barry talks about his new book in a chat with NPR's Neal Conan and offers a preview of his annual gift-giving guide.

Conan: Your book is set in 1960 in the New York suburb of Asquont. You grew up in the suburb of Armonk, N.Y. Total coincidence.

Conan: And this is a book about things that happen on Christmas Eve... It's going to be a stocking stuffer, don't you think?

Barry: It could stuff a stocking, yeah.

Conan: And Christmas pageants play a large part in this new book. I was fascinated by your experience as one of the three kings.

Barry: Yeah, I was in a pageant at St. Stephen's Episcopal Church every year, and the woman who ran the pageant, the director, had actually been in the legitimate theater in New York City and was a very dramatic person who took the theater very seriously and wanted it to be a really first-class, Broadway-style pageant production.

In one year, the gold, the frankincense, and the myrrh were all played by this woman's antique -- well, she had boxes and vases she would bring in - and one year we dropped the vase just as it was time to go on, because one of the kids in the pageant had stuck a rubber cigar in his mouth just to, you know, make the rest of us amused.

Anyway, and so we dropped the vase. And it... smashed into a million pieces, and so that was kind of loud and we were laughing pretty hard. And then we had to grab Rev. Morris' Rolodex, and that's what we out to give the Baby Jesus, a Rolodex. Well, we gave him gold, frankincense, and a Rolodex.

Barry: Well, Jesus was a Betsy Wetsy doll, but you couldn't tell from the audience.

Neal Conan: So what's on your Christmas guide? Give us a couple of hints.

Dave Barry: Okay, I'm going to give you a couple of good ones we got this year. I have to stress, all of these are real items. You can actually purchase these items. Why you would purchase them, I don't know, but they are for sale. One of them is the Marie Antoinette ejector head doll.

Conan: Does it have one of those rings at the back so you can pull it and she says, 'Let them eat cake?'

Barry: No, it doesn't. It doesn't speak. It's just the head shoots off. And we also have -- my favorite and I've got to say by far the most expensive gift guide item we've ever featured -- it's called a Cruzin Cooler. And it's a cooler, like a beer cooler that, for reasons I don't understand -- it happened in California -- they modified it and put a motor in it and wheels on it so you can drive down the street in this... on a cooler, basically.

Dave Barry: I've got to tell you one other item because I really love it. It's a woodpecker repeller item. If you are afflicted by woodpeckers --and who isn't, really? -- this thing, when it hears the pecking of the woodpecker... on your house... a spider drops down. And the woodpecker is apparently terrified and flies away, because apparently woodpeckers are so stupid that they believe spiders eat them. They're not the brightest bird, possibly because they're just always hammering wood with their heads all day. I don't think I'd be that bright if I did that either.

Excerpt: 'The Shepherd, the Angel, and Walter the Christmas Miracle Dog' 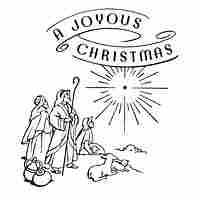 The pageant is a really big deal at St. John's. On Christmas Eve, pretty much everybody goes to it, even the people who you never see at church. The pageant director is Mrs. Elkins, who's a tall, skinny lady with a lot of makeup whose hair is the exact same color as the orange part of a candy corn. She's been in charge of the pageant a LONG time. My dad says the first year she directed it, the part of the baby Jesus was played by the actual Baby Jesus.

Mrs. Elkins used to be in The Theater in New York. She's really, really serious about the pageant. Like, if you're one of the Three Kings and the choir starts to sing "We Three Kings of Orient Are," you better come out at the exact right time or Mrs. Elkins gets really hacked off.

I know this because last year I was a Three King. The other two were Phil Spenser and Mike Crane. During the pageant, we waited for our entrance in Rev. Morrow's office, which is right next to the sanctuary. We were supposed to come out bearing gifts of gold, frankincense and myrrh, which were played in the pageant by a vase and two wood boxes that Mrs. Elkins brought from her house. We were supposed to put these down next to the baby Jesus, which was played by a Betsy Wetsy doll, but from the audience you couldn't tell.

The Three Kings were supposed to come out as soon as we heard the organ start playing "We Three Kings of Orient Are." But when the music started, Mike would sing, "We three kings of Orient are / Smoking on a rubber cigar." So we'd be laughing back there and we wouldn't come out on time, and Mrs. Elkins would get really mad.

She'd yell: "WHERE ARE MY KINGS? I WANT TO SEE KINGS AS SOON AS THE ORGAN STARTS!"

So we'd have to start over, but as soon as the organ started playing Mike would sing the cigar song again. You know how when you're not supposed to laugh, like at somebody's funeral, that's when you laugh the hardest and you can't stop, and it feels like you're going to pee your pants? That's what it was like. The three of us kings would sort of stagger out of Rev. Morrow's office making these squeaking noises from trying to hold the laughing in, like we were the Three Hamsters, and Mrs. Elkins would go: "WHAT IS SO FUNNY? DO YOU BOYS THINK THE BIRTH OF OUR LORD AND SAVIOR IS SOME SORT OF JOKE?" And she'd make us go back and do it again, and the next time Mike would only get part of the "we" out, so all he said was "wuh," and we were laughing so hard I had to hold on to Phil so I wouldn't fall over. So Mrs. Elkins stopped the rehearsal and gave us this huge lecture about how she was not volunteering her time as a person with years of experience as a Professional in The Theater so that we could turn a Sacred Religious Moment into some kind of juvenile Three Stooges comedy routine.

So anyway, on Christmas Eve the whole church was full for the pageant like it always is. We Three Kings were waiting back in Rev. Morrow's office wearing our costumes, which included crowns and itchy fake beards. When the organ started playing the Three Kings song, Phil and I thought for sure Mike was going to sing, so we were ready for that, and we were NOT going to laugh.

But Mike didn't sing. What he did, like, one second before we were supposed to go out was put an actual rubber cigar in his mouth, sticking out of his beard. Phil and I were cracking up so much that Phil tripped on his robe and dropped Mrs. Elkins's vase, which broke in, like, a million pieces. By then, the choir was singing, and we had to go out, so Phil grabbed the Rolodex off of Rev. Morrow's desk. That's how the Three Kings went out, late, two of us squeaking like hamsters and one of us smoking a rubber cigar, bringing the baby Jesus gifts of gold, frankincense and a Rolodex. When Joseph, who was played by Jeffrey Reid, saw us, he started to crack up, and Wendy Hobart, who was Mary, pinched his arm really hard, so just when the narrator, who was played by Mr. Lundt because he has a deep voice, said the part about how the Wise Men worshipped the baby Jesus, Jeffrey went, "YEOW," and Phil tripped on his robe again and dropped the Rolodex on Betsy Wetsy Jesus, and Mike and I were laughing so hard that we had to run back into Rev. Morrow's office, and I actually did pee my pants a little bit.

A lot of kids told me after that it was a really great pageant, but Mrs. Elkins was pretty mad. She cornered Phil's, Mike's and my parents afterward, and went on and on about how she was volunteering her time and experience in The Theater and all she asked in return was a certain minimum amount of cooperation, and she had never in all her years in The Theater seen such disrespect, and she has as good a sense of humor as anyone but there is a limit, and if other people don't mind that their children are juvenile delinquents that is their business, but when it comes to making a mockery of the birth of Our Lord and Savior she has to speak out, not to mention the destruction of a vase that happened to be a souvenir of her trip to Mexico.

When Mrs. Elkins was finally done talking, my mom and dad walked toward me looking real serious. I thought I was going to get killed. But as soon as we got in the car, my dad busted out laughing. My mom was trying not to laugh, but then Dad said, "When you think about it, Jesus could use a Rolodex, to keep track of all the apostles," and Mom cracked up.

Then they got all serious and told me I was going to have to help pay for Mrs. Elkins's vase with my allowance. Then Mom said the pageant was about a sacred thing and it was nothing to joke about. Then it was real quiet in the car for a minute. Then Dad started humming "We Three Kings of Orient Are" and Mom started laughing so hard that she fell over sideways in the front seat.

It was a really good Christmas.