Accessibility links
Supreme Court Considers Abortion-Ban Arguments The Supreme Court steps back into the abortion arena today. The issue is not the right to have an abortion but whether Congress can ban certain methods of abortion known as "partial-birth abortion." 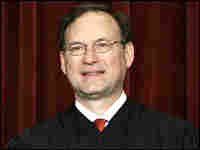 1992: Dr. Martin Haskell presents a paper on a late-term abortion method known as dilation and extraction, or D&X, at a meeting of the National Abortion Federation.

1993: The National Right to Life Committee obtains Haskell's paper, publicizes it and begins a campaign to outlaw the procedure.

November 1995: The Partial-Birth Abortion Ban Act passes in the House of Representatives for the first time, 288-139.

June 2000: In Stenburg v. Carhart, the Supreme Court rules that the Nebraska ban against the procedure abortion opponents call "partial-birth abortion" should be overturned because the statute doesn't provide an exception for the health of the woman. The ruling invalidates similar laws in 29 out of 31 states.

July-March 2002: The House of Representatives passes a revised version of the Partial-Birth Abortion Ban Act. The Senate passes a version, too.

Nov. 5, 2003: The Partial-Birth Abortion Ban Act is signed into law by President Bush. The National Abortion Federation challenges the law in court, and blocks the enforcement of the law for its members.

June 2004: In Planned Parenthood v. Ashcroft, a federal district judge in California strikes down the law because of the "undue burden" it places on the woman and her health, and the vague language contained in it.

August 2004: In NAF v. Ashcroft, a New York district judge deems the law unconstitutional because it does not contain exceptions protecting a woman's health.

July 2004: In Carhart v. Gonzales, three judges of the 3rd U.S. Circuit Court of Appeals unanimously agree that "because the Act does not contain a health exception, it is unconstitutional."

September 2004: In Carhart v. Ashcroft, U.S. District Judge Richard Kopf of Nebraska concludes that, "in the absence of an exception for the health of a woman, banning the procedure constitutes a significant health hazard to women."

The Supreme Court steps back into the abortion arena Wednesday. The issue is not the right to have an abortion but whether Congress can ban certain methods of abortion.

Six years ago, a closely divided Supreme Court struck down a Nebraska law banning the procedure abortion opponents call "partial-birth abortion." The reason: The law did not allow the procedure when it was needed for the health of the woman. The court said that a significant body of medical authority viewed the procedure as safer in certain circumstances. So a ban would be an undue burden on a woman's right to have an abortion.

Three years later, Congress adopted a similar ban. The law specifically states that the procedure is never medically necessary. Since the ban's enactment, however, lower courts have, without exception, struck it down, declaring that it is an unconstitutional end-run around the Supreme Court's previous ruling. The lower courts also ruled that the congressional "findings" in the law are simply wrong, that in fact a substantial body of medical opinion believes a health exception is necessary for women in some situations.

The Supreme Court that will consider the partial birth question Wednesday, however, is quite different from the court that considered the issue six years ago. The justice who provided the decisive fifth vote last time, Sandra Day O'Connor, is gone and has been replaced by a far more conservative justice, Samuel Alito.

As Jay Sekulow, chief counsel for the conservative American Center for Law and Justice observes, "You can't ignore that reality that this is a different Supreme Court six years later."

At the heart of Wednesday's case are the congressional findings about the procedure abortion opponents call "partial-birth abortion," and whether Congress was justified in its conclusion that there is a medical consensus that the procedure is "never medically necessary." The lower courts, without exception, ruled the congressional findings were not supported by the facts.

For instance, one court heard from 11 highly regarded specialists in the field of obstetrics and gynecology. Ten of the specialists said that in some cases a "partial birth procedure" is necessary to prevent hemorrhaging, organ failure or infertility. Indeed, the court noted that even the one doctor who completely supported the ban conceded that he had used and would use the procedure in some circumstances.

The lower courts also concluded that certain congressional findings were, on their faces, untrue -- such as the assertion in the law that no medical college teaches the procedure; in fact, many of the country's major medical schools and teaching hospitals do.

To understand the issues before the Supreme Court on Wednesday, some definitions are in order. The procedure that abortion opponents call "partial-birth abortion" is, by all accounts, done in the second trimester of pregnancy, a stage when the fetus is not yet viable. Only 10 percent of the abortions done in the United States are done in this second trimester. Most of these are cases where the woman's health is at serious risk, or the fetus has been diagnosed with serious anomalies. In the second trimester, almost all procedures are dilation and evacuation, known as D&E. In most D&Es, the fetus is dismembered or comes apart while in the uterus. But one form of D&E occurs when the fetus emerges from the womb intact, with the head remaining inside the uterus, and because the head is too large to come out on its own, the doctor compresses it, killing the fetus. That procedure is known as an "intact" D&E or a D&X -- and that is what abortion opponents say they consider a partial-birth abortion.

Some doctors think there is no need to do a D&X because alternative methods are just as safe. But others disagree, including the leading medical group in the field, the American College of Obstetricians and Gynecologists.

"These procedures are selected generally, at least in my experience, on the basis of what is best for that woman... and the situation she's in," says Fred Frigoletto, past president of the college and associate chief of OBGYN services at Massachusetts General Hospital. He, like many other doctors contacted by NPR, contends that the term "partial birth" is meaningless in any medical sense, and that there is no significant difference between a D&E and a D&X.

Indeed, even many doctors who do not do the D&X procedure still oppose the federal ban for fear that its terms are so vague that they could be construed by a prosecutor as a ban on all D&E procedures, putting doctors at risk of jail, and amounting to a ban on almost all second-trimester procedures.

As Michael Greene, a professor of obstetrics and gynecology at Harvard Medical School, puts it, even "the standard procedure could be construed as conflicting with the law as written."

That's because the federal ban does not use medical terms. It uses lay terms, and it outlaws any overt action that would terminate life for a fetus once it is outside the womb to the point of the naval. So widespread is medical opposition to the law that the American Medical Association has withdrawn its initial endorsement of the statute.

On Wednesday, Eve Gartner, who represents Planned Parenthood, will tell the Supreme Court that Congress could have enacted a ban that would pass constitutional muster if it had used medical terms and had included a health exception for women. But, she contends, Congress was more interested in passing a law for propaganda purposes.

"Congress drafted a law that doesn't match up with the pictures that Congress has been showing to the American public for almost 10 years now," says Gartner. "We're not talking about fetuses that could survive if they were born."

James Bopp, general counsel for the National Right to Life Committee, asserts that this is a procedure that was appropriately criminalized by Congress because it is "too close to infanticide." He asks, "Do we have to approve the performance of partial-birth abortions, which involves the intentional killing of a child that is just inches away from complete delivery of the child? I mean, literally, the child is being held in the doctor's hand alive, and is then killed by the doctor."

With medical opinion divided on the issue, anti-abortion forces argue that Congress is entitled to resolve the question with a total ban.

But abortion-rights forces counter that Congress cannot simply ignore substantial medical opinion and declare that black is white and white is black.

Abortion-rights groups have gone to great lengths in these cases to document the many serious maternal health conditions and grave fetal anomalies that could necessitate the procedure that would be banned under even the narrowest interpretation of this law.

In one case outlined in a friend-of-the-court brief, for instance, it took until the 20th week of pregnancy before doctors could tell from diagnostic tests that one woman was carrying a child with such serious defects that the infant, if it lived to term, would not survive afterward. Meanwhile, the woman had developed uterine tumors and her health was at risk. The woman, who asked that we not use her name, said her understanding was that the congressionally enacted ban "would be defined to include the procedure that I had."

Abortion opponents contend that even if there are some cases where the banned procedure would be safer for the woman, the number of those cases is "marginal." And, as the National Right to Life Committee's Bopp puts it, that "slight safety increase" has to be "balanced against" the potential for life.

But Planned Parenthood's Gartner counters that there is no balancing when you are talking about a fetus that cannot survive, no matter how the procedure is done. And since the fetus cannot survive until after the second trimester, she says, "There's no legitimate reason for the government to force the woman to have a less than optimally safe abortion procedure."

That, however, is not what Justice Anthony Kennedy said in his impassioned dissent to the Supreme Court's ruling six years ago. Kennedy, who is widely viewed as the deciding vote in this case, said that the court majority was "closing its eyes to a law expressing the will of the people that medical procedures be governed by moral principles," based on "the intrinsic value of human life, including the life of the unborn."