Accessibility links
The Latino Vote, on its Own Terms Hispanic Americans have become a more independent voting bloc that resists easy analysis. Political parties continue to battle for their loyalty. But in order to receive it, they may have to let Hispanics define themselves on their own terms. 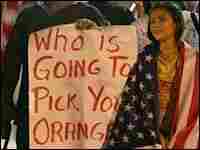 Immigration is one of the top priorities of Hispanic Americans, according to recent polls. Here, Zury Ruiz, 9, wears an American flag at a rally last July after the city council in Avon Park, Fla., voted down a proposal cracking down on illegal immigration. Joe Raedle/Getty Images hide caption 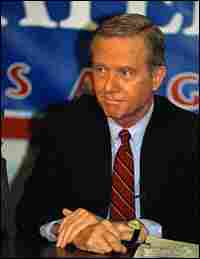 Latino voters in the United States can be difficult to pigeonhole. Here's a confusing set of statistics: In a 2006 poll by the Latino Coalition, 57 percent of registered Hispanic voters said they identified with the Democratic Party. But the same group more often labeled themselves "conservative" than "liberal."

In the 2004 elections, President Bush won an estimated 44 percent of the Latino vote -- the first time in more than 30 years that Hispanic support for the Democratic Party dropped below 60 percent. Those numbers raised GOP hopes that Latino loyalty to the Republican Party would continue to grow.

But many political analysts now suspect that national security fears uniquely affected the Latino vote in 2004, in favor of the GOP. Polls have long indicated that Hispanic Americans care more about domestic policy issues like education, the economy and health care, but security seems to have trumped domestic issues.

With the 2006 midterm congressional elections, Latinos may be returning to those traditional priorities. Latinos ranked immigration as the most important issue facing their families now. Recent polls show that Hispanic Americans think Democrats in Congress represent their views on immigration better than Republicans.

Recent actions in Congress may be responsible. In June, many Republican in Congress balked at renewing the Voting Rights Act of 1965 and tried to discontinue foreign language ballots. Immigrant worker legislation backed by President Bush was abandoned. Instead, the president signed a bill in October calling for a 700-mile fence to be built along the U.S.-Mexico border.

Sen. Mel Martinez (R-FL), a prominent Republican of Cuban descent, took note of the reaction to both events among the Latino community. "I think there could be great political risks to becoming the party of exclusion, and not a party of inclusion," Martinez said.

Cecilia Munoz of the National Council of La Raza -- a left-leaning Latino political group-- said she found the GOP-backed passage of the border fence legislation "insulting," and added that the Republican Party is running "a real risk" of replicating a GOP blunder that devastated the California Republican Party in 1994.

That year, then-Gov. Pete Wilson, a Republican, backed a statewide ballot initiative denying illegal immigrants public education and social services. The subsequent backlash among the Latino community may have been largely responsible for turning California into a solidly blue state.

Political science professor Adrian Pantoja speculates that a new voter identification law in Arizona -- a measure largely backed by the GOP -- may galvanize Latino voters in a similar way. Critics say the law excludes some minorities who are eligible to vote, but who can't afford a driver’s license.

The 1994 California shift away from the GOP may repeat itself -- this time, as a nationwide Latino backlash, Pantoja says. "Today we march, tomorrow we vote" was the chorus shouted at last spring’s massive pro-immigrant marches, and get-out-the-vote drives could entirely change the political leaning of the Latino voting bloc.

Latino opinions on other key issues are becoming unpredictable. Hispanic Americans now favor government-funded health care for the first time. Even the so-called "moral issues" that the GOP has used to woo Latinos in the past are slowly becoming more fluid. Polls indicate that fewer Latinos oppose gay marriage and abortion than only a year ago.

Attitudes about the "American Dream" are also changing among Latinos, who appear to feel distanced from the status quo in the United States. Fewer and fewer believe that life will be better for their children than for themselves, and more Latinos are beginning to favor keeping their culture independent, as opposed to assimilating into American society.

Hispanic Americans have become a more independent voting bloc that resists easy analysis. Political parties continue to battle for their loyalty. But in order to receive it, they may have to let Hispanics define themselves on their own terms.