Accessibility links
Rumsfeld Resigns; Democrats Seize House Following the dramatic Democratic victories in the House and Senate, Defense Secretary Donald Rumsfeld resigns. The election has largely been seen as a referendum on President Bush and the war in Iraq. 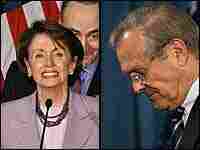 Vin Weber, a Republican strategist and ex-congressman: "Republicans made some pretty big mistakes... [They] did not deal effectively with a number of isolated incidences of corruption."

Rep. John Murtha (D-PA), who will run for House majority leader: "In a sense, this was about Bush and his Iraq policy. And when he lost the majority in the House..., he has to listen to the people."

Frank Donatelli, who was a political adviser to President Reagan: "I do suspect that [President Bush] will finally be forced to use his veto pen..."

John Podesta, who was President Clinton's chief of staff: "The real question is, does [President Bush] reach out his hand and try to work together?"

Former Senate Minority Leader Tom Daschle: "I think [the election] sends a message... [that] we have no alternative but to find new consensus."

Matthew Dowd, a Republican strategist who worked on President Bush's 2000 and 2004 campaigns: "People are tired of the polarized environment in Washington."

Democrats won a cliffhanger race in Montana on Wednesday that brought them to the brink of control of the Senate, after Americans sick of scandal and weary of war ended the Republican majority in the House.

With Democrats now assured of 50 Senate seats, the battle for outright control came down to Virginia, where the party's candidate, Jim Webb, held a small lead.

American voters "spoke for change and they spoke for a new direction for all Americans," said Rep. Nancy Pelosi, (D-CA) poised to become the first female House speaker in history.

Following the dramatic victories by Democrats, President Bush announced Wednesday the resignation of Defense Secretary Donald Rumsfeld, the face of U.S. war policy and a lightning rod for critics worldwide.

"I recognize that many Americans voted last night to register their displeasure with the lack of progress being made" in Iraq, President Bush said at a news conference. "Yet I also believe most Americans -- and leaders here in Washington from both political parties -- understand we cannot accept defeat."

In the closing weeks of the campaign, Democratic candidates from Massachusetts to Hawaii told voters that the mid-term election was a referendum on President Bush, the war in Iraq, the state of the economy and Republican control of Capitol Hill.

In one television ad after another, Democratic candidates for the House and the Senate depicted their Republican rivals shaking hands with the president, with the president's arm around their shoulders, imprinting Mr. Bush's face as a lasting image, the ultimate negative ad with the toll of American military deaths rising in Iraq and the president’s approval rate sagging.

The strategy worked. Democrats needed a net gain of 15 seats to take control of the House. By Wednesday, Democratic inroads had reached at least 26 seats. A number of races could take days more to decide, with some requiring recounts and others potentially resulting in lawsuits.

The Democrats did well in Senate races, too. They unseated Republican incumbents in Ohio, Rhode Island, Pennsylvania and Missouri, but in Tennessee Bob Corker narrowly kept that open Senate seat in Republican hands by withstanding a strong challenge from Rep. Harold Ford Jr., a Democrat.

While Virginia remained too close to call, Jim Webb, the Democratic candidate, declared victory before going to bed early Wednesday.

"The votes are in and we won," Webb said. However, votes were still being counted, with a final tally, including all absentee ballots, expected later Wednesday. About 8,000 votes separated Webb from incumbent Republican George Allen, and a recount was virtually certain.

Democrats now have a 50-49 lead in the Senate, with 49 Republicans, 49 Democrats and one Independent. Independent Vermont Senator-elect Bernie Sanders says he will caucus with the Democrats.

It also proved to be a very good year for Democratic gubernatorial candidates. There were contests for governor in 36 states, with Republicans holding 22 and Democrats 14. At the end of the day, Democrats held on to all their seats and took six away from Republicans: New York, Ohio, Maryland, Massachusetts, Arkansas and Colorado.

Two years ago, President Bush came away from his re-election saying he had a lot of political capital, and he intended to spend it. Tuesday's results showed that he actually has very little capital indeed. With Democratic control of the House, and possibly in the Senate as well, it will be interesting to watch what happens in the next two years -- whether the two parties can reach some sort of accommodation, or whether the partisan rancor remains.

Rep. Pelosi said she is prepared to lead a House focused on partnership, not partisanship, and to work with the White House on a new course in Iraq.

"The success of the president is always good for the country, and I hope that we could work together for the American people," Pelosi said at a Wednesday news conference.