Accessibility links
A New Direction in Iraq? Analysts Are Skeptical Will Donald Rumsfeld's departure from the Pentagon lead to a new direction for the U.S. in Iraq? Many observers are skeptical that a new defense chief will make much headway... or that a Democratic Congress will sway President Bush's commitment to "victory in Iraq."

A New Direction in Iraq? Analysts Are Skeptical

A New Direction in Iraq? Analysts Are Skeptical 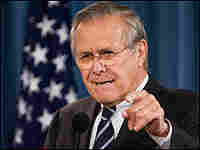 Who is Robert Gates? 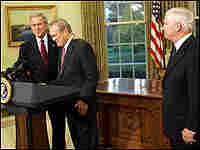 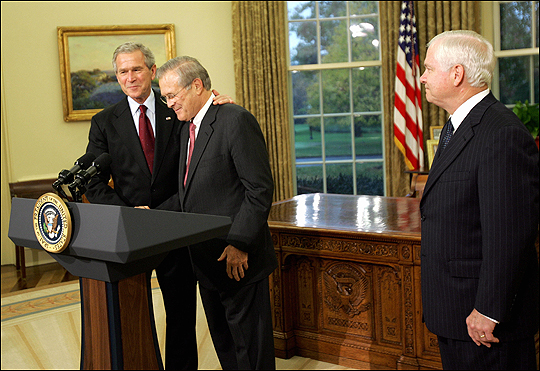 Will a change at the top of the Pentagon lead to a new U.S. approach in Iraq?

"Muted optimism" that the resignation of Defense Secretary Donald Rumsfeld might bring new strategies was buffered in Washington and beyond by concerns that earlier mistakes have put the U.S. military -- stretched thin around the world -- in an untenable position.

As James Dobbins, a national security expert with the Rand Corp., told NPR's Jackie Northam: "We are at this point in a process of damage limitation and of looking for the least-bad alternatives."

President Bush says he remains committed to "victory in Iraq," but in the face of Democratic political advances, he reached out Wednesday to a request for new ideas.

"In coming days and weeks, I and members of my national security team will meet with members of both parties to brief them on latest developments and listen to their views on the way forward," Mr. Bush said.

Many in Washington await the recommendations of the Iraq Study Group -- a bipartisan commission co-chaired by former Sec. of State James Baker and Democrat Lee Hamilton, former chair of the House Committee on International Relations -- which is preparing its report on the war.

But few expect the study group to deliver a bold new direction.

"Jim Baker and Lee Hamilton are very capable men, but I can't believe they have a secret plan that nobody else has thought of for how to extricate ourselves," says Max Boot, senior fellow at Council on Foreign Relations.

Still, "Arab pundits speculated what this would mean for U.S. troops in Iraq... would they stay or would they go?" Tarabay said.

Rumsfeld announced he would give up the office he has held for six years, and with it his role of chief architect of the war effort.

Gates will resume his long career in public service -- pending Senate confirmation -- after a 12-year respite in academia. Gates' last government job was as CIA director from 1991-1993, during the previous conflict in the Persian Gulf.

Mr. Bush, Rumsfeld and Gates made a joint appearance at the White House on Wednesday afternoon in a symbolic passing of the torch. Rumsfeld had become a lightning rod for critics worldwide.

"Pentagon insiders say Rumsfeld had been looking for at least a year to leave for a chance to leave on a high note... but the rising tide of public resentment over the war simply made that impossible," NPR's John Hendren reported.

"I recognize that many Americans voted last night to register their displeasure with the lack of progress being made" in Iraq, Mr. Bush said Wednesday afternoon. "Yet I also believe most Americans -- and leaders here in Washington from both political parties -- understand we cannot accept defeat."

In the closing weeks of the campaign, Democrats framed the midterm election as a referendum on President Bush, the war in Iraq and Republican control of Capitol Hill.

Just last week, President Bush said he would stand by his defense secretary for his final two years in office. That became politically impractical the moment Democrats swept away the Republican majority in the House, setting up the threat of endless committee sessions on the conduct of the war in Iraq.

"Clearly, with the Democrats at least in control of the House, Rumsfeld was looking at the next two years spending a lot of time on the Hill, getting some very pointed questions from lawmakers," NPR's Tom Bowman observed. "He would spend mostly all his time on the Hill."

Gates, 63, a longtime friend of the Bush family, has served as president of Texas A&M University since 2002. However, his career in public service spanned four decades, with a focus on national security issues. He joined the CIA in 1966, and served as acting director of the agency during the Reagan administration.

He went on to hold high-ranking posts at the FBI and the National Security Council before returning to head the CIA in 1991 under President George H.W. Bush.

"He's very well regarded in Washington and in Congress," Bowman said of Gates, though he cautioned that confirmation hearings -- required of any Cabinet appointee -- could be used for "a long discussion of mistakes in Iraq."

Rumsfeld, an old ally of Vice President Dick Cheney -- they served together in the Ford administration -- became a somewhat surprising choice for defense chief after President Bush took office in 2001. His combative, often jaunty style at news conferences imprinted itself on the public for good and for bad.

"I don't think there's been a secretary of defense in history who has been in front of the media as much as he has," noted Pentagon press secretary Eric Ruff.

But when public confidence in the war in Iraq began slipping, Rumsfeld became what he might himself have called a "high-value target" for criticism, some of it from within the Republican party.

Before he leaves his post, Rumsfeld will pass Robert McNamara as the longest-serving U.S. defense chief. McNamara's bitter legacy was the Vietnam War. Will Rumsfeld face a similar fate over Iraq?

"I think Iraq will be the bulk of his legacy," Rieckhoff said. "I don't think history is going to be kind to Rumsfeld, and I don't think it should be."

"America is safer and the world is more secure because of the service and the leadership of Donald Rumsfeld."

Q&A: Who Is Robert Gates?

Robert M. Gates, President Bush's choice to replace Donald Rumsfeld as defense secretary, is an old ally of the president's father and a veteran of Capitol Hill political wars.

Now president of Texas A&M University, Gates served as CIA chief under President George H.W. Bush from 1991 to 1993, during the first Iraq war. After one of the most contentious confirmation processes on record, Gates' nomination was passed by a 64-to-31 vote.

Even so, experts say Gates is well regarded in Washington intelligence and military circles. He is also known as a longtime friend of the Bush family.

This is at least the second attempt by to bring Gates into the current Bush administration. Gates was said to be the first choice for the new position of national intelligence director. He turned it down.

William Webster, former head of the CIA and FBI, says Gates is a "consensus builder."

"He's been there before, but he comes without any context on the issues that have been debated in the election. That's a good thing," Webster says.

He also notes that as a member of the Baker panel, Gates will bring perspective on the issues facing the administration on Iraq.

Retired Maj. Gen. Mike Davidson, former assistant to the chairman of the Joint Chiefs of Staff, notes that Gates is respected among military officers. Gates served in the Air Force during the Vietnam era, but does not have extensive military experience.

Davidson says Gates' priority will be to provide a channel for the recommendations of the Baker panel.

Webster, the former CIA head, says of Gates: "I know him as a man of exceptional character, someone who headed the Eagle Scouts nationally. He's an educator, bright, with a lot of qualities that will help carry us forward, including the ability to attract consensus and get information."

A native of Kansas, Gates spent nearly 27 years with the Central Intelligence Agency, which he joined in 1966. He is the only career officer in the agency's history to rise from entry-level employee to director.

Prior to taking the top spot at the CIA, Gates served as the agency's deputy director and as deputy to Brent Scowcroft, national security adviser to President H.W. Bush.

Gates has served six presidents, of both parties, and spent nearly nine years at the National Security Council.

Author of the 1996 memoir From the Shadows, Gates is a graduate of the College of William and Mary. He received his master's degree in history from Indiana University and his doctorate in Russian and Soviet history from Georgetown University.

Since leaving the CIA, Gates has often weighed in on U.S. policy and security. Excerpts from some of his speeches and articles are below: