Accessibility links
Chinese Doctor Nominated to Run the WHO Members of the World Health Organization vote on Dr. Margaret Chan's nomination to be the body's new director general. She would be the first Chinese national to head a major United Nations body, possibly a sign that China hopes to play a larger role in the U.N.

Listen
Chinese Doctor Nominated to Run the WHO

Members of the World Health Organization vote on Dr. Margaret Chan's nomination to be the body's new director general. She would be the first Chinese national to head a major United Nations body, possibly a sign that China hopes to play a larger role in the U.N. 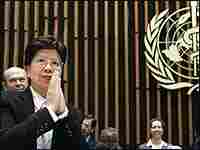 Nominee World Health Organization (WHO) director-general Margaret Chan from Hong Kong acknowledges the members of the board at the organization's headquarters in Geneva. Fabrice Coffrina/AFP/Getty Images hide caption

Here's a signal that China may be assuming a larger role in global politics. The World Health Organization is set to name Dr. Margaret Chan as director general, and she is the nominee of China.

BRENDA WILSON: Dr. Margaret Chan is the first Chinese national to hold a top United Nations position. Two years ago, she joined the Communicable Diseases Division of the World Health Organization to develop a plan for dealing with an influenza pandemic. She was hired by Dr. Lee Jong-Wook, who died unexpectedly last spring. After she was selected by the executive board in Geneva yesterday, she promised to work tirelessly to honor his commitment to world health.

Dr. MARGARET CHAN (Selected as Director General, World Health Organization): I have the commitment, the passion, and the humility to serve the member of faith of this organization - this great organization. I also have the determination to achieve results for health. I'm sure we have the power to do so. We just need to be very smart in our planning and priority-setting, and most of all be streetwise in our actions.

WILSON: She's a bird flu expert who has won her stripes the hard way, dealing with a series of major disease outbreaks as Hong Kong's health director - an Avian Flu epidemic in 1997, that earned her a reputation for being able to take decisive action. Dr. Robert Webster, a virologist with St. Jude's Research Hospital, worked with Dr. Chan in Hong Kong during that outbreak.

Dr. ROBERT WEBSTER (Virologist, St. Jude's Research Hospital): Margaret is a listener and makes people work together. She gets at the nitty-gritty of the question, and makes decisions that, that - sometimes hard decisions - and I think can deal with the cultural bridge, which is real between these societies. And I think that that's what she has to offer.

WILSON: Specifically, he's talking about difficulties between Hong Kong and Beijing, and between China and the wider world. Some in Hong Kong were critical of what they perceive to be her slowness in getting Chinese officials to be more open about what was going on during the Bird Flu outbreak. In the end, hundreds of thousands of poultry had to be slain.

Dr. WEBSTER: The poultry marketers at that time were very upset that their markets were shut for three months. She had to pull all the information together - from agriculture, from the health department, from the university and make the decision to slaughter all the poultry in Hong Kong. The decision was really Margaret's in the end, and again was criticized.

WILSON: She was similarly decisive and successful in getting the SARS epidemic under control. A gargantuan bureaucratic challenge also awaits her at WHO. The organization's regional offices have built their own fiefdoms among the ministries of health of countries in their regions, and they don't always take direction from the director general. That's hurt WHO's reputation. Nils Daulaire, of the Global Health Council, says that in the two years she's been in Geneva, she's won the respect of the people she'll have to work with.

Mr. NILS DAULAIRE (Global Health Council): I don't think it's an accident that she's risen to this very high level. She tends to do things by consensus and with a smile, rather than by fiat. I think that will tend to work well as long as she has a clear vision of where she's going.

INSKEEP: You're listening to NPR News.