Accessibility links
Startups Help Clean Up Online Reputations New companies are offering to help people get rid of embarrassing material about themselves on the Internet. Job seekers especially are turning to these services, because so many employers use the Internet to do background searches on potential hires. 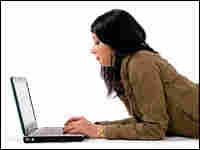 It used to be a lot easier to keep your indiscretions private. But in the age of Google and social-networking sites like MySpace and Facebook, people's most embarrassing details are increasingly out there for the world to see. In some cases, it's affecting their ability to land a job.

In a recent survey, one in 10 hiring managers say they rejected candidates because of things they found out about them on the Internet.

Michael Fertik recently launched a company called ReputationDefender.com. For a small fee, he digs through clients' Internet profiles and then shows them how they appear online. If clients see something they don't like, ReputationDefender will contact whoever controls the Web page and urge them to delete the material.

If they resist, Fertik -- a Harvard law grad -- says his company is ready to use attorneys.

"This is sort of a PR service for the everyday person. Celebrities have been using PR services at the cost of thousands of dollars a month for decades. Now we can do that for every person for less than $10 a month."

Fertik says he got the idea for his business from news stories.

"College students were getting denied jobs after college because of content about them on the Internet. You know, frat pictures someone took of them years ago doing a keg stand when they were 19. This stuff can haunt you for many years."

One of company's early clients was Mark Zeiba, a Chicago dentist. Zeiba, 28, is sensitive about appearing too young to patients.

But if patients Googled him, the first thing they found was a page with a link to college drinking pictures.

"Couple of buddies and I sitting at a bar with a table full of empty beers in front of us. And I just realized at that time when people would come in and say, 'Oh, I saw a picture of you.' It just wasn't the idea I wanted out there and the image I wanted out there."

Naymz created an official Web page for Zeiba. It also bought ad space to make sure his profile appeared on the first page of popular search engines. For that, Zeiba pays $4.95 a month.

Naymz also advised Zeiba on how to contact the site with the bar pictures and have them removed.

"I know that some people, they spend a lot of time on the Internet and they're familiar with blogs and everything, but I personally don't have the time and I don't have the know-how to do it at this point," Zeiba says.

Even when you delete images from the Web, they sometimes live on search-engine files.

Drugan tells clients that if they can't get rid of negative material, they can obscure it by creating "a lot of positive, accurate info, about yourself." He recommends creating a blog or a MySpace page.

"The more positive content you have about yourself, the more likely that's going to be pushed to the top of Google and the other search engines and push that other information down to the second or third page where very few search-engine users actually get to," Drugan says.

That's probably a good idea, because recruiters seem to be poking around.

A survey of more than 1,000 hiring managers by CareerBuilder -- the Internet job site -- found that one in four used search engines to screen candidates.

David Perry, an executive recruiter, says a candidate to become a chief financial officer was found to have a gambling problem.

"We actually found it out and... tracked his profile back to a online gambling site on the Web. Now, you have to ask yourself, What's that got to do with his job? Well nothing, probably. But this is a... multibillion-dollar corporation that we were putting a chief financial officer into and we just didn't think it was appropriate."

It's too early to know whether identity-management firms will attract many clients. After five months, Naymz has 3,000 users, but only 150 clients for its paid, premium service. But Perry says that with so many recruiters vetting people on the Internet, job candidates either need to background themselves or hire someone else to do it for them.