Accessibility links
Special Fantasy Edition: From 007 to Election '06 In Volver, Penelope Cruz follows in the footsteps of Loren and Lolabrigida. James Bond DVD sets are to never say die for. You might die laughing if you tune into MXC, the dubbed Japanese game show. Persian Girls is an evocative memoir. And political junkies: it's time for Fantasy Congress!

Special Fantasy Edition: From 007 to Election '06

Special Fantasy Edition: From 007 to Election '06

The weekend is ready for you, but are you ready for the weekend? We have five great suggestions for whiling away your leisure hours. For high-minded types, there's the evocative new film Volver and the lovely memoir Persian Girls. The James Bond DVD sets are to never say die for. For fans of low culture, the return of the dubbed Japanese game show Takeshi's Castle is cause to break out the sake. And for political junkies, the rush of the election may have faded but you can re-create it online with Fantasy Congress! 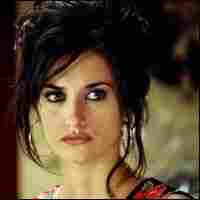 When I was 11, my dad and I had a running debate about who was the most beautiful movie star in the world. I generally argued for Marilyn Monroe while Dad favored Elizabeth Taylor. Then one day, Dad suggested a third alternative: Sophia Loren. Mom, who had always been amused by our discussions, gently suggested a change of subject. It wasn't until years later that I realized she thought Monroe and Taylor -- film goddesses in the Hollywood mold -- were safe topics, but that Loren would inevitably bring sex into the equation.

I mention this because in Volver, which means "to return" in Spanish (and which instantly returned me to our family debate), Pedro Almodovar offers up a new screen goddess. Penelope Cruz has always been beautiful, of course, but in this story of women nurturing each other across generations, the director recreates her as a screen siren in the Loren/Lollobrigida/Magnani mold -- ravishing, earthy, strong, vibrant and deeply sensual. He surrounds her with sirens of other stripes (seductively mature pixie Carmen Maura, chief among them). But Cruz is ever the film's focus, and whether washing dishes or deciding what to do with a body that's inconveniently lying in a pool of blood on her kitchen floor, she's magnificent.

Bob Mondello, who reviews movies for All Things Considered, now believes that Rita Hayworth was really the most beautiful movie star in the world. 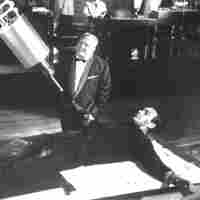 That Goldfinger is such a party pooper. James Bond just hates when this happens. MGM Home Entertainment hide caption 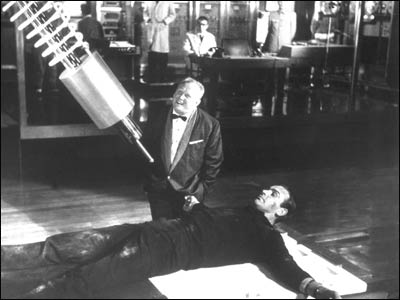 That Goldfinger is such a party pooper. James Bond just hates when this happens.

No, it's not the cool gadgets. And it's not the sirens with naughty names. The real pleasure of a James Bond movie is the dedication to detail. From the exotic locales (the Alps, Cairo and Sardinia in The Spy Who Loved Me) to the sets of legendary production designer Ken Adam (remember Goldfinger's giant rumpus room?), everything is meticulously chosen to transport you to a world in which a single superspy can save the world from total destruction.

Now -- just in time for the new Casino Royale film with a new Bond -- come the first two volumes of the James Bond Ultimate Edition DVD box sets. How ultimate is it? Each film has been digitally restored so that every one of those expensive details can be fully appreciated. In The Spy Who Loved Me, for example, you can instantly recognize that the painting hanging in the background on the wall of the villainous Stromberg’s aquatic lair is Botticelli’s "The Birth of Venus." In previous DVD versions, it just looked like some run-of-the-mill Renaissance painting.

Then there are the bonus features -- dubbed "Declassified: MI6 Vault." Now it is true that previous Bond "special editions," from 2002, had some extras. But this time it really seems that the studio released every clip they could dig up. The "Vault" for The Man with the Golden Gun even features clips of Roger Moore and Herve Villechaize’s appearance on a 70s talk show (Villechaize studied painting!) and practice footage from a martial-arts scene. There’s even an archival commercial from the stunt company that orchestrated the 360-degree car flip in one of the chase scenes. Watching that ad -- with its praises of the power of FORTRAN computers and the thrill of demolition derbies, which the company apparently also produced -- you’re reminded that as thrilling as Bond films are to watch, they also are marvels of filmmaking. That car’s "Astro-Spiral" lasts less than a few seconds onscreen but lives forever in film history -- kinda like, say, a diamond.

Kenneth Terrell, an editor at U.S. News and World Report, has never had a martini, either shaken or stirred. 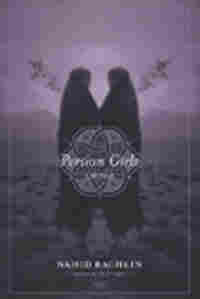 Novelist Nahid Rachlin tells of her life in Tehran and the lives of other "Persian Girls," powerless to control their fate. hide caption

Imagine you are 9 again, walking to school with your best friend when an oddly familiar man with a pockmarked face and brush mustache abducts you. The city was Tehran, in the time of the Shah, and the man was Nahid Rachlin’s father. Until then, Rachlin had been raised by a beloved aunt -- her mother’s widowed, childless sister, Maryam. But in tradition-bound Iran, 9 was the age at which a girl could be betrothed; Rachlin would need proper male supervision, her father had decided. Rachlin had been a "gift child," generously handed over by a fertile sister with many children, to her infertile sibling. Whatever Maryam or Rachlin’s mother -- or Rachlin herself -- might wish, they were powerless.

That is only the beginning of Nahid Rachlin's memoir, Persian Girls, which portrays Iran's sexual politics and traditions, as played out in a wrenching personal tale. Once "reunited" with her birth family, Rachlin went on to forge a close friendship with her own sister, Pari -- only to once more watch on, helplessly, as Pari is forced into a disastrous arranged marriage with an abusive husband. Rachlin’s route to freedom comes in the form of a scholarship to a tiny Christian women’s college outside St. Louis, where she paints herself as a comically naive non-English speaking foreigner in a homogenized world.

Here, as in her previous four novels and short story collection, Rachlin, a New Yorker now for many years, focuses on the personal and cultural displacements of Iranian Americans living in multiple cultures. Rachlin reveals her story -- and that of all the other "Persian Girls" in her family-- with a deceptively dispassionate directness that makes her words all the more evocative.

Diane Cole is the author of the memoir After Great Pain: A New Life Emerges.

Like 'Deal or No Deal,' Only with Mud and Cruelty 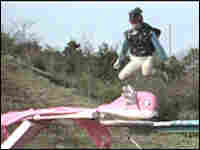 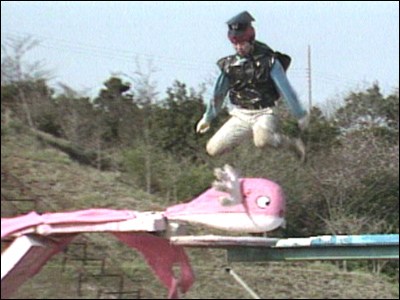 The rotating platform trips up a lot of contestants. Literally.

MXC (shorthand for "Most Extreme Elimination Challenge") shows actual footage from the Japanese 1980s TV game show Takeshi's Castle. Contestants took part in a series of muddy and brutal physical challenges: running quickly over a series of slippery rocks, balancing on a swinging rope, avoiding large boulders while running up a cliff. To add insult to the injuries (which frequently involved the groin), comedians dub the commentary. In the U.S. version, hosts Kenny Blankenship and Vic Romano provide play-by-play remarks. They give the teams made-up names (Inventors vs. Ex Child Actors, for example). And frequently mock their physical prowess.

Season Five promises to be "edgier and even more extreme" than in the past. Fair warning: If you're easily offended by vulgarities or sexually explicit double entendres or body/ethnic/sexual/religious humor, this challenge is not for you. To everyone else: Mmm, let's go!

Melody Joy Kramer, is spending a year at NPR as part of the Joan B. Kroc Fellowship program. Kramer is not easily offended by vulgarities or sexually explicit double entendres. 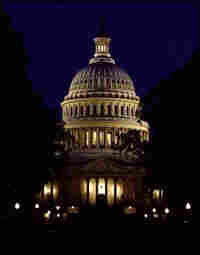 There are only 10,344 hours until the Iowa primaries. But if you're getting the political shakes, you might want to play Fantasy Congress -- just, you know, to take the edge off.

Created by four computer-science students at Claremont McKenna College, Fantasy Congress is the ultimate league for CSPAN groupies. Like fantasy basketball or football, Fantasy Congress is all about the strategy. Each player picks a team consisting of 16 members of Congress, spread out along the political seniority spectrum. Only two senior senators are allowed. You win points when your legislators introduce bills in their chambers, vote on the floor and obtain approval by committee in the opposite chamber.

Don't load your team with too many Pelosis! In this league (as in the real world), it's best to go bipartisan. And if you want to give up Tammy Baldwin, I'll trade you Marilyn Musgrave and two future reps of your choice -- but only if it stays under my salary cap.

To maintain political neutrality, Melody Joy Kramer (see above item for bio details) will not divulge who's playing on her Fantasy Congress team. 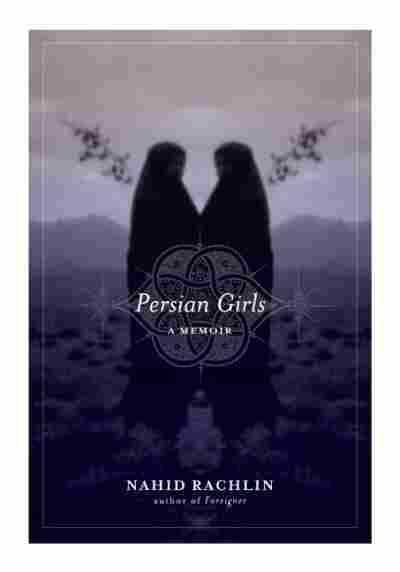