Accessibility links
Seniors Struggle over Medicare Drug Gap Coverage Many seniors faced sticker shock in September when their Medicare prescription drug coverage reached its limit. Some saw their medications increase six-fold in price. A look at options for bringing those costs down. 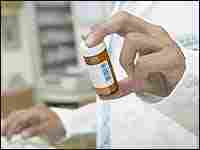 For further information on obtaining low-cost drugs, or for help renegotiating your Medicare drug plan, try these Web sites:

Consumer Reports Best Buy Drugs, a free Web site from the nonprofit Consumer Union, has suggestions for more affordable treatment alternatives that patients can discuss with their doctors.

BenefitsCheckupUp.org, a service of the National Council on Aging, helps determine if you're eligible for extra Medicare prescription drug coverage due to a limited income, and helps find a cost-effective drug plan that suits your needs.

The Medicare Rights Center provides free counseling to people with Medicare-related issues. It offers an online tool to help you compare Medicare prescription drug plans available at your neighborhood pharmacies.

Edna Fiore and Leona Tockey enrolled in the Medicare prescription drug plan when it started in January. But in September, they got a surprise when the cost of their drugs dramatically increased.

Tockey, 80, takes drugs for her heart, arthritis and an ulcer. Last year, she signed up for a Medicare drug plan where she lives in Cotadi, Calif.

"It was so wonderful last January to go the drug store," Tockey says. "I had three prescriptions and I had to pay $5 apiece."

That price was for generic drugs, but Tockey also had discounts on brand-name drugs. The savings were enough to finance a visit to her grandchildren in Virginia.

Falling into the Coverage Gap

But things changed in September.

"I went to the pharmacy, and something that I had been paying $28 for was now $74.85," Tockey says. She was stunned and confused by the change in price.

Edna Fiore, 73, of Littleton, Colo., had a similar experience. She's had chronic lung disease for 10 years and needs several medications to be able to breathe. But in September, the prices she had to pay out-of-pocket for those drugs went up six-fold, reaching $180 for one prescription.

Fiore and Tockey had fallen into a coverage gap. From January to September, they paid co-payments on their medications. But once the total cost reached $2,250, their coverage stopped, by design of their Medicare plans.

Coverage won't kick in again until they've each spent nearly $3,000 of their own money on their medicines.

Most plans participating with Medicare operate this way; they help people pay for their prescriptions in the beginning but stop paying when costs get higher, and start again when costs reach the catastrophic range. But for seniors on a limited income and with high medication costs, the so-called coverage gap is no small problem.

Searching for a Back-Up Plan

After the price jump, Fiore and Tockey went on a hunt to find the cheapest way to buy their medicines. According to a study by Consumers Union, people usually can find better prices outside their Medicare prescription drug plans.

But there's a good reason not to make that move, according to Pete Sikora, one of the Consumers Union study authors.

"We generally recommend that people shop within their plan, that they don't go outside of the plan," Sikora says.

That's because the drugs have to be purchased through their Medicare plans to count towards the amount needed to restart the coverage.

But Fiore is a savvy consumer and has worked the numbers. She's going to take a chance that she'll stay healthy enough that she won't need $3,000 worth of drugs between now and the end of the year when her coverage starts again anyway. Fiore, on a limited income, says she has to watch every penny.

She's decided to order her drugs from overseas, for much less money.

Leona Tockey was scared to do that. She's already had her Canadian prescription for heart medication confiscated once at the border. So her daughter and daughter-in-law helped her find another drug store within her plan that offered lower prices. But Tockey has had to cut back on her knitting and sewing supplies -- activities that she says are not only pleasurable, but keep her from being depressed -- to afford her drugs.

Medicare officials say people in the coverage gap can save money. Acting commissioner Leslie Norwalk suggests they talk with their doctors about lower-priced generic drugs, or shop around within the plan, like Tockey did.

For Medicare recipients who can use the Internet, the list of pharmacy prices at www.medicare.gov can be helpful. People answering the phone at 1-800-Medicare can help beneficiaries work through their options. And there's always next year.

Norwalk suggests that seniors unhappy with their current plans investigate other plans for 2007.

Open season -- the only time during the year when Medicare recipients can switch prescription drug plans -- begins Nov. 15. But according to consumer group Families USA, plans that pay for popular brand names and generics within the gap will cost 87 percent more than this year, with premiums as high as $136 a month.