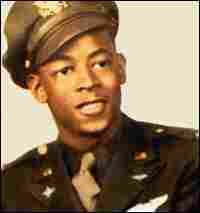 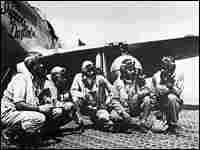 Pilots of a P-51 Mustang group of the 15th Air Force, stationed in Italy in 1944, kneel before the aircraft Skipper's Darlin' III. Corbis hide caption 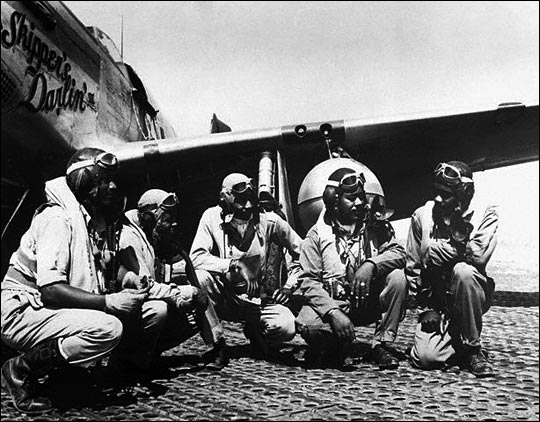 Pilots of a P-51 Mustang group of the 15th Air Force, stationed in Italy in 1944, kneel before the aircraft Skipper's Darlin' III.

In commemoration of Veterans Day, Tuskegee Airman Alexander Jefferson describes his service in World War II and the difficult adjustment that followed when he returned to a segregated United States.

In 1941, America's skies were segregated, like everything else in the nation. Though the United States and its allies were at war with the Axis powers of Japan and Nazi Germany, the Army Air Corps refused to train black pilots.

It took an act of Congress to change that, and the legend of the Tuskegee Airmen was born.

More than 1,000 black college graduates where trained to become fighter pilots at Tuskegee University in Alabama during World War II. One of those pilots was Jefferson, a Detroit native and graduate of Clark University.

Jefferson was part of a 332nd Fighter Group sent to Italy to escort Allied bombers on flights over enemy territory. He and his fellow pilots tenaciously attacked enemy fighters trying to shoot down the bombers before they reached their targets. They never lost a plane to any enemy fighters.

But on his 19th mission over Germany, Jefferson was shot down by anti-aircraft fire and spent the next year in Nazi prison camps. Ironically, he was given more respect by the Germans as a prisoner of war than as a black man back home in America.

His prison camp was finally liberated in April 1945 by soldiers from Gen. George S. Patton's 3rd Army. Jefferson witnessed first-hand the atrocities at a Nazi prison camp -- corpses stacked like wood, piles of hair to be used for seat cushions, the stench of human flesh, and a long table full of gold teeth. The ovens used to cremate prisoners were still warm.

Coming off the troop ship on his return to the United States, he was shocked to see that racism and segregation were still part of the fabric of American life -- there were signs at the end of the gangplank indicating "whites" and "colored" processing areas.

"America is the best country in the world. You don't like it? Leave it. The only obligation? Make it better. It ain't perfect, but it's home."

Jefferson wrote about getting shot down over Germany and his experiences as a prisoner of war in his memoir, Red Tail Captured, Red Tail Free: Memoirs of a Tuskegee Airman and POW.

Note: This segment contains language some might find offensive.

Memoirs Of A Tuskegee Airman And POW