Accessibility links
'Elvis at 21': Photos of a King in the Making A new collection of photos by Al Wertheimer captures that moment in time when a young man from Tupelo, Miss., went from being a regional heartthrob to an international sensation.

Listen
'Elvis at 21': Photos of a King in the Making 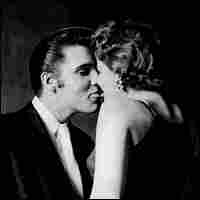 Elvis Presley and America were both at a crossroads in 1956. The singer was popular, but not widely known. The nation was waking up from the doldrums of the post-war Eisenhower era, ready for something new.

In many ways, it was a year that would change the social landscape of a generation. A new collection of photos by Al Wertheimer, Elvis at 21: New York to Memphis, captures that moment in time when a young man from Tupelo, Miss., shot from being a regional heartthrob to an international sensation.

Wertheimer was working as a freelance photographer in New York when RCA Records hired him to follow the entertainer as he toured from New York City back to his home in Memphis, Tenn.

In January of 1956, Presley was still playing high school gymnasiums. But by December, he was the most famous entertainer in the world. Presley didn't just light up American culture, he put a torch to it.

Wertheimer took more than 3,000 photos that captured Presley in his most intimate moments. A show from the book debuts Friday at the Govinda Gallery in Washington, D.C., and will tour around the nation.

View Some of Wertheimer's Images of a Young Elvis