Accessibility links
GOP Chair Mehlman Expected to Resign Republican National Committee Chairman Ken Mehlman is expected to announce Friday that he will not seek another term after a sweeping defeat in the midterm elections.

Republican National Committee Chairman Ken Mehlman is expected to announce Friday that he will not seek another term after a sweeping defeat in the midterm elections.

NPR senior correspondent Juan Williams talks with Alex Chadwick about how the Republican Party will go forward after the GOP's loss of both the House of Representatives and the Senate.

What to Expect from the Democratic Agenda

Hear a Report on the Democrats' 100-Hour House Agenda 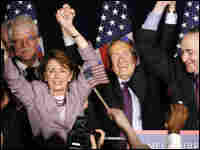 Scroll down for analysis of the Democratic agenda on:

"To the victors go the spoils," and so Democratic lawmakers are getting ready to claim the top leadership roles and committee chairmanships in both the House and Senate.

But there's another saying as well: "Be careful what you wish for, you may well get it." And so Democrats, having gotten what they wished for, may now find running the two chambers even more daunting than the last time they held them both at once (1993-94). That could be especially true given the strong-minded Republican president working down the street.

At the same time, the Democrats have come in from the political wilderness for a reason. The party's capture of control of the House and Senate is widely being interpreted as a repudiation of President Bush's policies and of Republican rule. And the president is showing some signs he's getting the message. On the day after the election, he announced the resignation of Donald Rumsfeld, his controversial secretary of defense, and later in the week he met with the new Democratic leaders of the House and Senate.

So now Democratic lawmakers find themselves in the unaccustomed position of setting the agenda -- at least for one branch of the federal government. And while party leaders have promised to govern in a spirit of bipartisanship, changes can be expected in congressional initiatives across a broad spectrum of issues -- from U.S. policy in Iraq to health care, immigration, the federal minimum wage and the environment.

NPR reporters offer their analysis on what to expect from the new Democratic majority: