Herbert Hoover's reputation suffered in the U.S. as the Great Depression struck. But in Belgium, he's still seen as a national savior for organizing a World War I relief effort credited with saving millions from starving. 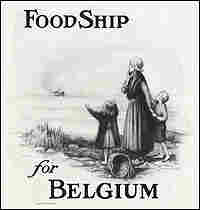 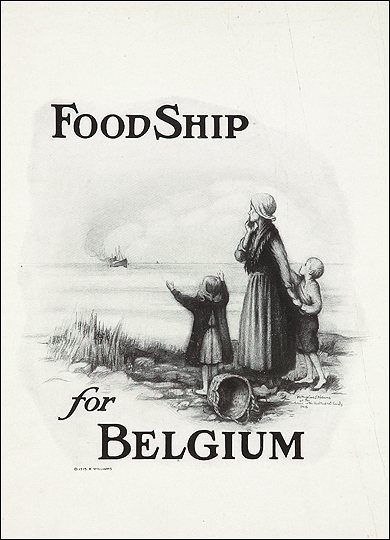 Detail from a poster for the relief effort run by Herbert Hoover.

Today is Armistice Day in Europe, marking the end of the First World War 88 years ago. In Belgium this year, the memories of the war are linked to a remembrance of America's 31st president, Herbert Hoover. Although his presidency during the Great Depression left him with a mixed reputation at best in this country, Hoover is remembered as a hero in Belgium, where a new exhibition recalls how he saved the country from starvation during the Great War. Eleanor Beardsley reports from Brussels.

ELEANOR BEARDSLEY: George Nash is a historian and biographer of Hoover.

GEORGE NASH: It was the largest relief operation the world had ever seen to date. Never before in human history had an entire country been fed during war when it was already occupied by a conquering army.

BEARDSLEY: Unidentified Man: By the end of September, city-dwellers and workers are the first to view the twin impacts of hunger and rising insecurity.

CHRISTOPHE GUYETA: (Through translator) Herbert Hoover was a master communicator. A whole campaign was launched in the U.S. and in other countries to show Belgium's distress. The American people were moved by these posters and by the Belgians' suffering, and the campaign worked because the Americans gave generously.

BEARDSLEY: Hoover was given diplomatic immunity and able to travel freely between the combatants, but Hoover's forceful and direct manner was anything but diplomatic when he needed to get his provisions through. Tom Korogolos is America's ambassador to Belgium.

TOM KOROGOLOS: He stretched a lot of legal and diplomatic niceties. He would do things, try and get the State Department and the government to move on them. And when it took too long, he would blandly write a press release, give it to New York Times and say, here's what happening, and Washington would faint and say, gee, I guess we better do it.

BEARDSLEY: In the small community of Overijse(ph), just south of Brussels, Pete Vincent talks to his daughter about Herbert Hoover. He's the president of the local history club and shows a photo taken in a food distribution center during World War I.

VINCENT: See this photo (unintelligible) in Overthem(ph) in 1915, and you distributed all these things we have received from our friends in the States, is here occupied territory. And what we see here? The American flag. You see this? It's very important, eh?