Accessibility links
The Lasting Appeal of Orff's 'Carmina Burana' Carl Orff's 1937 composition Carmina Burana remains one of the most popular pieces of the classical music repertoire. Conductor Marin Alsop and Scott Simon discuss why so many artists have performed the piece.

Carl Orff's 1937 composition Carmina Burana remains one of the most popular pieces of the classical music repertoire. Conductor Marin Alsop and Scott Simon discuss why so many artists have performed the piece.

Carmina Burana ranks up there with Beethoven's Fifth as a perennial favorite among concert-goers. But Carl Orff's famous piece has inspired countless others to produce their own versions, from the death metal group Therion to rappers Naz and Puff Daddy.

(SOUNDBITE OF SONG "HATE ME NOW")

NEARY: To the electronica artist SUB.

NEARY: Conductor Marin Alsop has a new recording of Carmina Burana with the Bournemouth Symphony Orchestra on the Naxos label. Maestro Alsop takes over as music director of the Baltimore Symphony Orchestra next year. Earlier, she spoke with Scott Simon about this music.

Are there signatures from Carmina Burana that pop up in music over the years?

MARIN ALSOP: This has to be probably the best-known 20th century piece, because it's been excerpted to sell everything from cars to aftershave. It's amazing what kind of associations people make for this piece. And actually, something I love to do is, you know, go around and play the opening - the 'O Fortuna - for people, and see what image it evokes. Because I think some people would see themselves, you know, driving in a certain brand of car, where others would see themselves, you know, putting on a certain type of lingerie. Who knows?

SIMON: How would you describe this piece, Carmina Burana?

ALSOP: It's a spectacle. It's very hard to categorize, and that was Orff's the intent, really. He wanted it to be a piece for all of the senses: to hear the voice, to hear the words, to experience this enormous orchestra, two pianos. And also, it was envisioned to have a dance element and a theater element as well.

SIMON: Let's listen, if we could, to the opening section, 'O Fortuna.

SIMON: How does this set the scene for what follows?

ALSOP: Well, the enormity of this opening is so spectacular. Isn't it? And it's all about fate and fortune and how that impacts our lives, and also the hushed quality after this enormous opening. You know, suddenly, let me tell you a secret. Come closer.

SIMON: The poems were discovered in an abbey near Munich in the early part of the 20th century. They were written by defrocked monk and minstrels, I'm told. Yeah.

ALSOP: There's a little bit of a controversy about who actually wrote the body of these poems. It might have been some young people studying, about to go into the monastery, and I think from the text one could definitely get that sense, because so much of the text deals with the things that they are about to give up - you know, lust and drinking and all the really incredibly good things in life that they're about to give up. So I think that makes a lot of sense to me.

SIMON: The work is divided into three parts, titled Spring, In the Tavern, and Love.

ALSOP: Everything that's important in life is in this piece. There you go.

SIMON: Some of the songs are a little colorful, even by today's standards.

SIMON: Yes. I would say colorful, but of course, you know, when things are in Latin, the X-rated element almost gets elevated to a new level.

ALSOP: If I could put all of my swearing in Latin, I think that would definitely elevate my life.

SIMON: There are paeans in this work to the tavern life.

ALSOP: I think the word excess probably captures this piece. And I think that again draws people in, because there's something about talking about the excesses in life and the edges that is very appealing.

SIMON: Let's listen if we could.

SIMON: For those of us who have not been to the abbey, what is he saying, Maestro?

ALSOP: Estuans interius - that translates into burning inside. So that just gives you a little burning inside with violent anger, you know, and this is all about - yeah, it's really hard to talk about on the radio, I must say.

ALSOP: One of the spectacular dimensions to Carmina Burana is these amazing solos, you know, for the baritone, who's this hunky kind of masculine guy that you just heard. And then we have the tenor, who depicts the swan on a spit. You know, his dying days. And so the range for the tenor is enormously high in a falsetto voice.

ALSOP: And then there's a gorgeous soprano who sings higher than one thinks possible. So again, it's about extremes and excess.

SIMON: In other words, you don't want to say that she sings high, but the dogs in the audience are driven wild by that performance.

ALSOP: It's sort of on the edge of dogland. It's almost leaping from a complete standstill to the top of a building. That's what she has to do, and it's spectacular.

ALSOP: The words to Dulcissime - sweetest one I give myself to you totally.

SIMON: Was Orff influenced by the works of any other composers?

ALSOP: He's combining so many different stylistic elements. I mean we hear Stravinsky in it in these cross rhythms and when the two pianos get going. And at the same time we can hear really the monks in the monastery - elements of Gregorian chant. And so there's so many different varieties of music, musical styles that come into play, I think that's actually what gives it part of its appeal, because it's got something for everyone.

SIMON: Let me ask you about a section called Veni, Veni.

ALSOP: You hear in this piece the Stravinsky rhythms, and this idea of using two pianos is quite unusual and...

SIMON: Now, they sound like they're trying to convince somebody of something.

ALSOP: Yes. Well, I mean the literal translation, veni, veni, venias - come, come, oh come. So it's all about enticement, and so I think it definitely is this trying to lure people in.

ALSOP: Well, it's this desire of the public to identify and really categorize people. Ironically he wrote several other Carmina-like pieces. There are three of them in the trilogy, and the other two people don't know at all. So maybe that's going to be my - one of my goals to get people to know, to celebrate the three different Carminas.

SIMON: Maestro, good to talk to you again.

ALSOP: Great to be here. Thank you.

NEARY: Maestro Marin Alsop, who takes over next year as conductor of the Baltimore Symphony Orchestra, speaking with Scott Simon. This last song from Carmina Burana is a love song called In Triutina. For more on Carmina Burana, visit our Web site at npr.org. 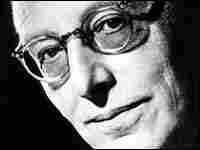 Music from Carl Orff's 'Carmina Burana,' featuring Marin Alsop conducting the Bournemouth Symphony, from a recording which will be released on the Naxos label in January 2007:

If I could only take one piece of music on a long trip, I might pick Carl Orff's Carmina Burana. Its 25 tracks offer something for everyone — and a piece of music for every mood imaginable.

The subject matter covered in Carmina stays pretty basic: love, lust, the pleasures of drinking and the heightened moods evoked by springtime. These primitive and persistently relevant themes are nicely camouflaged by the Latin and old German texts, so the listener can actually feign ignorance while listening to virtually X-rated lyrics. (Veni Veni Venias! Come, come come now!)

The music itself toggles between huge forces and a single voice, juxtaposing majesty and intimacy with ease. At its largest, Carmina employs a chorus of 200 or more voices, an orchestra of 100 players and a children's choir of 50 or more, plus three soloists (soprano, tenor and baritone).

The music's style is equally inclusive, ranging from simple chant to almost rock-inspired rhythmic sections. The opening and closing tracks, both titled "O Fortuna," mirror each other: They begin with all forces at full throttle, then immediately scale back in an ominous warning repetition that builds to a climactic close. Between these bookends lies music of many diverse styles, with a hypnotic repetitive element, an intense purity of the solo soprano and the children's choir, a raucous quality to the all-male sections, and a humor underlying the lewd nature of the lyrics (which sound so erudite in Latin), all combining to create an immediacy and accessibility not found in many works.

Carmina Burana has enjoyed popularity and longevity, in large part due to its remarkable crossover ability: Excerpts have been widely used in movie trailers and television commercials throughout the world. Portions of the work are heard in films ranging from Excalibur to Natural Born Killers to Jackass.

That may not have been what Orff envisioned when he wrote Carmina Burana in 1936, but he did have much more than a straightforward musical experience in mind. He subtitled his exuberant hour-long oratorio "Cantiones profanae, cantoribus et choris cantandae, comitantibus instrumentis atque imaginibus magicis," or "Secular songs for singers and choruses accompanied by instruments and magical images" — hardly typical concert fare.

From a conductor's point of view, Carmina is an absolute blast — so many people, so many textures, so much variety. And, contrary to what conductors might tell you, when 300-plus performers are involved, size does matter.

In 2007, Marin Alsop will become music director of the Baltimore Symphony, making her the first woman to head a major American orchestra. She was named a 2005 MacArthur Fellow, the first conductor ever to receive the award.