Accessibility links
Does a Bit of Steel Get Rid of That Garlic Smell? Here's the premise: After cutting onions or garlic, you can remove the odor by rubbing your hands on a stainless-steel faucet. Dr. Bob Wolke, a chemistry professor, tests the theory for "Science Out of the Box."

Listen
Does a Bit of Steel Get Rid of That Garlic Smell? 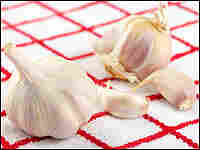 Sure, it looks pretty. But garlic leaves quite the olfactory impression, too. Will stainless steel cut through the smell? The scientific jury remains out... iStockPhoto.com hide caption

We've got another "Science Out of the Box" entry on the relationship between sunshine and sneezing. And you're invited to submit your questions as well. Scroll down for details.

You may not think about it, but your kitchen is a laboratory. You probably conduct experiments there every day. Whipping runny egg whites into stiff foam, altering the colors of meat and vegetables and somehow making raw eggplant and slimy scallops taste great.

Angie Frizzell of Chapel Hill, N.C., wrote to share a kitchen tip... and to ask what science lies behind it.

"Years ago my mom taught me a trick," Frizzell wrote: "After you've been cutting up onions or garlic and you have that odor on your hands, you can get the odor off just by rubbing your hands on the stainless steel faucet. Since then, I've noticed that in kitchen catalogues, you can buy a gadget for 20 or 30 dollars that does the same thing. It's just a chunk of stainless steel that you rub your hands on. Either way it works. But why?"

Dr. Bob Wolke, a professor emeritus of chemistry at the University of Pittsburgh, is the author of four books on everyday science. And he says he's not so sure it DOES work. But he was willing to try the scientific method out on the problem.

"As far as [Dr. Wolke] knows, there are no published studies on this stinker of a problem," Jacki Lyden notes. "So what would a chemist do? Conduct an experiment, of course."

Wolke took a head of garlic out of a pot on his own kitchen counter and smashed it with the side of a broad knife to get the skin off. Then he "smashed it some more," and rubbed it all over his hands.

Then he "rinsed the solids off under cold water" and "picked up the stainless steel block and I rubbed it on my hands."

Finally, the sniff test. And he could still smell the garlic on his hands.

He repeated the experiment with a plain old rock instead of stainless steel, and also with soap and water.

Wolke admits it wasn't a perfect scientific study, and allows that further experiments might show that the stainless-steel remedy is not just an old wives' tale.

But his result? "There was odor left on my hands after all of these methods." 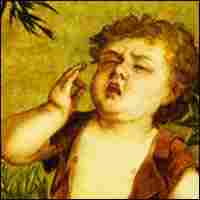 Franz Lefler was one smart painter. In 'Frolicking Putti,' the 19th-century Czech artist illustrates the principle of the sun-triggered sneeze. Corbis hide caption

We say "God bless you" to our listeners, and not just because they've sneezed. Science Out of the Box has received many queries from the NPR audience, but we're greedy -- we want more. Send us your questions about puzzling scientific phenomena. We can't reply to all of the the submissions but will answer some of the questions in the weeks to come, like this one about nasal matters.

My four-year-old son, Logan, asked me the other day why he sneezes when he goes out into the bright sun. I sneeze similarly but my daughter and wife do not. Why do some people sneeze because of bright light? -- Bill Bolduc

"Why is it that one sneezes more after one has looked at the sun?" he asked in Problems, Book XXXIII, in a section called "Problems of the Nose." "Is it because the sun engenders heat and so causes movement, just as does tickling the nose with a feather?"

Sorry, Aristotle, you're sneezing up the wrong tree.

A sneeze provoked by sudden exposure to intense light is known as the photic sneeze reflex -- or, more whimsically, ACHOO (for Autosomal-dominant Compelling Helio-Ophthalmic Outburst). It occurs in about a quarter of the population, according to researchers at the University of Texas. And it has nothing to do with the heat of the sun.

Researchers say some people can also sneeze when they suddenly breathe in cold air or eat strong mints, like Altoids. These sensations likely overstimulate other nerves close to the trigeminal nerve, launching the sneeze.

But why doesn't the family that sees together sneeze together? ACHOO syndrome is passed along genetically, as an "autosomal dominant trait." This means only one parent has to have a set of ACHOO genes pass on the trait. In your case, Mr. Bolduc, you probably have one set of DNA with the genes for ACHOO and one sneezeless set of DNA. Each of your children had a 50 percent chance of inheriting this trait from you. In your family's case, genetic inheritance worked just as expected: two kids, and exactly 50 percent of them sneeze when they look at the sun.