Accessibility links
Suicide Bombers Kill 35 at Police Recruiting Station Two suicide bombers set off bombs almost simultaneously Sunday among a group of Iraqis who were at a police recuiting station in Western Baghdad. At least 35 people were killed and 60 were injured. At least nine other explosions in and around Baghdad killed 12 additional people.

Two suicide bombers set off bombs almost simultaneously Sunday among a group of Iraqis who were at a police recuiting station in Western Baghdad. At least 35 people were killed and 60 were injured. At least nine other explosions in and around Baghdad killed 12 additional people. 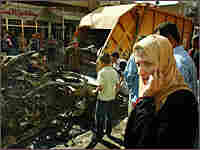 Iraqis gather at the site of a car bomb explosion near a crowded restaurant on Nov. 12, 2006. Attacks in and around Baghdad, including a double suicide attack at a recruiting center, left 45 people dead Sunday. Wathiq Khuzaie/Getty Images hide caption 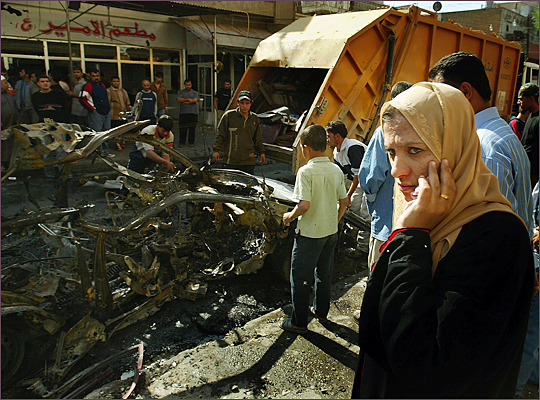 Iraqis gather at the site of a car bomb explosion near a crowded restaurant on Nov. 12, 2006. Attacks in and around Baghdad, including a double suicide attack at a recruiting center, left 45 people dead Sunday.

The election may be over but the carnage in Iraq continues. Today, two suicide bombers set off explosions almost simultaneously among a group of Iraqis who were at a police recruiting station in western Baghdad. At least 35 people were killed and 60 were injured, many seriously. At least nine other explosions went off in and around the Iraqi capital, killing at least 12 more and injuring dozens more.

JJ, bombing people who are looking to join the Iraqi security forces, it really cuts to the heart of U.S. policy in Iraq.

JJ SUTHERLAND: It does. The U.S. policy is to have Iraqi forces step up as American forces step down. And so recruitment centers in particular have long been targets of Sunni insurgents. This one, however, was the worst in the months. The last attack this bad was in January in the Sunni town of Ramadi in Anbar Province. There, 70 police recruits were killed. And Iraqi police and army are attacked every day here. You constantly hear a constant drum beat, you know, three here, four here, five here, checkpoints, patrols, etc. But both Iraqi and American officials say it will be a long time before these Iraqi security forces are able to actually take control of Iraq.

SEABROOK: JJ, last night there was a mass kidnapping south of Baghdad. What can you tell us about that?

SUTHERLAND: A caravan of mini-buses was taking Shiite pilgrims from Baghdad south to the holy city of Najaf. It's a very common occurrence for religious pilgrimages, or people take bodies there to be buried in this holy cemetery there. Apparently a group of Sunni insurgents had dressed in Iraqi army uniforms and set up a fake checkpoint near the town of Latifiya, south of Baghdad. And this area, where the road goes through between Baghdad and Najaf, has become so violent over the past few years, it's known at the Triangle of Death.

So when the Shiites got to the checkpoint, they were stopped by these Sunnis. At least 10 were killed right away, 68 were kidnapped. Some of the women who were kidnapped were found sort of tossed to the side of the road, bound arms and legs. And this is not the first time that Shiite pilgrims have been kidnapped in large numbers. Just a few weeks ago, about two weeks ago, a convoy of Shiites traveling in mini-buses north of Baghdad near the town of Tarmiya were stopped again at a false checkpoint. Forty of them were kidnapped.

SEABROOK: JJ, what's the response been to this Sunni/Shia violence?

SUTHERLAND: Well, just about the incident last night, parliament was meeting today and Shiite lawmakers were outraged. They accused the Shiite-led government of not doing enough to stop these recurring attacks, and they accused them of not responding with enough force to this particular incident. And one parliamentarian, and another source that we have, has also said that arms tribesmen are heading to the area to try to do something, saying they'll take matters into their own hands if the government won't do anything.

And it's just this kind of sectarian violence that has driven Iraq into what some analysts are calling a civil war. There are death squads operating in Baghdad, both Sunni and Shiite. They seem to operate almost at will. Scores of bodies are picked up on the streets of Baghdad daily, many of them kidnapped, tortured - often with an electric drill - and killed with a single shot to the back of the head.

SEABROOK: And JJ, amidst all this, the United States is still looking for a missing soldier.

SUTHERLAND: Yeah, that's right. Ahmed Qusai al-Taie is an Iraqi-American soldier. He moved to the states as a teenager and was deployed to Iraq last year. About two weeks ago, he was visiting family for dinner in Baghdad, outside of where he was based in the fortified Green Zone, and was kidnapped. Now, there was a massive, massive manhunt for weeks that shut down much of the city. And just yesterday the U.S. put forth an offer of a $50,000 reward. They said in the past they're talking to some groups. It's unclear if they're talking to the kidnappers or intermediaries, but his fate is really unknown at this point. We don't know if there's a ransom demanded or even really if he's still alive.

SEABROOK: NPR's JJ Sutherland speaking to us from Baghdad. Thanks, JJ