Accessibility links
Book Explores Intellectual Power of William James William James was an intellectual force of nature in 19th century America. Trained as a medical doctor, he saw links between the life sciences, psychology and philosophy, and was a seminal thinker on religion. Author Robert D. Richardson has written a new biography called William James: In the Maelstrom of American Modernism.

William James was an intellectual force of nature in 19th century America. Trained as a medical doctor, he saw links between the life sciences, psychology and philosophy, and was a seminal thinker on religion. Author Robert D. Richardson has written a new biography called William James: In the Maelstrom of American Modernism.

This is ALL THINGS CONSIDERED from NPR News. I'm Jacki Lyden. When philosopher William James was a young medical student at Harvard in the 1850's, he was obsessed with the big questions in science and religion. His quest for the answers took him to South America on a journey with creationist scholar Louis Agassiz. Writer Robert D. Richardson describes the journey in his new biography, William James: In the Maelstrom of American Modernism.

Mr. ROBERT RICHARDSON (Writer): James went 2,000 miles up the Amazon, sometimes in rowboats, sometimes in dugouts, sometimes by steamboat. It was a very romantic and difficult and sickness-loaded journey.

LYDEN: Who is Louis Agassiz?

Mr. RICHARDSON: Louis Agassiz was the sort of great science statesman of America in the era just before and during Darwin, a man of enormous charm and ability and wit. And he bet his whole career on Darwin's being wrong, and William becomes a student. And instead of just falling under the spell of this great man, one of the astonishing things is that William could very early on see that Agassiz was probably wrong about evolution and that Darwin was probably right.

LYDEN: In his biography, Richardson describes William James as one of the great American minds. The brother of novelist Henry James, William James founded the Department of Psychology at Harvard University and made major contributions to the fields of religion, philosophy and psychology. At the time that James is going to Harvard, the three fields of physiology, psychology and philosophy, which today seem to us quite distinct, were very interwoven.

Mr. RICHARDSON: Well, they were. Philosophy was a large general term that covered a great deal of ground. Natural philosophy grew into what we now call science. Moral philosophy grew into morals and toward theology. It was very capacious, and then physiology seemed to be just going after the technical aspect of mind, what made mind work, so that it could all be seen as a unified field at the time.

LYDEN: How did James contribute to separating those fields of thought?

Mr. RICHARDSON: He's the earliest and still one of the strongest voices in what's called the mind/body problem, which says we have a mind and we have a body, and James says not so fast; there's no real place where you can say the mind stops and the body begins, they are so interconnected. Mind is physical and the physical body seems driven by mind sometimes. One has to take this much more carefully. This is really the beginning of the modern way of looking at the science of mind.

LYDEN: At the time that he finishes Harvard, there's no certitude that he's going to become anything more than a marginal thinker, part of the fringe. You see when he corresponds with so many other people who are not nearly as well known as James that he might have been one of them. What lifted him out?

Mr. RICHARDSON: It's almost impossible to say, except that he has the sort of astonishing belief in there that he once phased that the powers that you possess are harmonious with the universe. He really believed that we are not isolated and alien figures in the universe but that we are constructed in such a way as to be able to understand it, that our powers are somehow part of the way things really are. And there is so much encouragement and optimism in that, that it's a very great inter mental resource. Now, exactly how this played out for William is very hard to follow. He was very seriously depressed for quite a long time.

LYDEN: For a long time, and had a lot of physical complaints.

Mr. RICHARDSON: And probably quite suicidal, and he drove his mother crazy detailing all his complaints. He was talking about his headache and his bowels, one thing and another, and he was always going over his symptoms. And two things happened as he's coming out of it, three actually. He's reading a French Philosopher named Reneuvia(ph), who says that we are free. He meets a young woman named Alice Gibbons, falls wildly in love with her and she becomes his wife later on. And he takes a position teaching, where he has to show up at eight o'clock in the morning and be in the classroom. These three little things that many of us go through things like this seemed to have turned for him.

LYDEN: He believed that you act as if, you act as if it's true because action itself will help. If you are depressed and you manage to throw yourself out of the chair it can almost physically start to trigger you, and that was a very radical concept at the time.

LYDEN: You know, I first encountered James while studying religion at a university, which certainly is avowedly Christian, Valparaiso University. And in the course that we took on James, he was introduced to us as a thinker who did not deny the existence of God, and whether he actually believed in God or was agnostic, he talked about the process of thinking about God.

Mr. RICHARDSON: That's right. He's always much more interested in the process than he is in the product. He believed that we should live as if there were a God. There may be, there may not be, but living as though there were a God is the biggest compliment we can pay the universe and the best way we can learn to treat it. He would use a little antidote. He would say, say you're climbing in the Alps and there is a step you need to take and it's just a foot more than you can reach. If you believe that you can make that jump, you've got a better chance of making the jump than if you believe you're going to fail. And there are situations like that in which belief creates the reality that it wants.

LYDEN: Besides the unification of the mind and body and principles of psychology, let's talk about some of the other contributions of his thinking.

Mr. RICHARDSON: One of the very great ones, perhaps the greatest, is The Varieties of Religious Experience. And this is a book which undertakes to examine what it is that all religion rests on. It's a huge undertaking. And the whole thing is done through memoir and through quotation and through very patient assembling of first person witness. And what is so impressive about it still, and people still pick this book up and it changes their lives and it turns them in a new direction, is that it says that religion is not fundamentally about churches, about scriptures, about bishops or priests or figures. It's not institutional and it's not frozen and it's not about the past.

LYDEN: I have to say that revisiting James through your biography, I was amazed at the fact that this man who was a genius, brilliant, was not a snob. There wasn't any part of human experience that he didn't seem that he ought to consider first before he wrote about it or thought it. Drugs - he took some rather mild hallucinogenics. The spirit world. He was open to all kinds of ideas.

Mr. RICHARDSON: He certainly was. He was open to the possibility of life after death. He was open to the possibility of extrasensory perception, except he wouldn't have called it extrasensory. The idea that you can automatically exclude is something he fought against all his life, and that's why he keeps saying you're really better off believing or better off leaving yourself open to belief than you are insisting that nothing can be believed in except what you have absolute proof for. Openness was his credo. He believed that if you closed your mind on something, it was the end of intellectual life. That's what he told Gertrude Stein. She remembered it on her deathbed.

LYDEN: Well, it is truly an amazing life and an amazing and accomplished book.

Mr. RICHARDSON: Well, thank you. It's been wonderful being on the program.

LYDEN: Robert D. Richardson, thank you very much for joining us today. Mr. Richardson is the author of William James: In the Maelstrom of American Modernism. Thank you again. 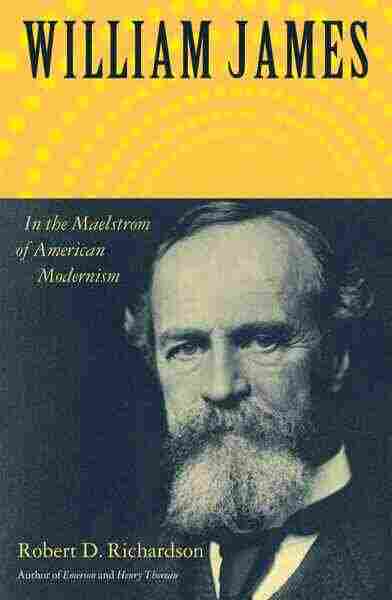 In the Maelstrom of American Modernism