Accessibility links
Untold Stories of Kindness As an Army medic in Iraq, Sgt. Ernesto Haibi has seen his share of violence and death. But despite his wartime experiences, Haibi believes mankind's goodness can foster a positive, more peaceful future. 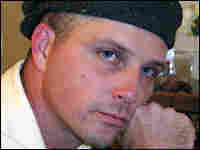 Sgt. Ernesto Haibi is a medic in the 23rd Infantry Battalion based in Ft. Lewis, Wash. His military service includes five years in the Air Force and 10 years in the National Guard. Haibi's blog, Candle in the Dark, explores his wartime experiences. Courtesy of Ernesto Haibi hide caption

My time in Iraq showed me the truth of my beliefs. I believe in mankind -- not gods, not devils, not angels and not spirits. I saw man's bravery from both soldier and civilian, and I saw horror and destruction from them, too. I saw hate and loathing from all sides, and I saw caring for children, rebuilding of hospitals and schools, and feeding the poor. Not by a government but by individuals, by one man helping another man.

As a medic, I went to local clinics to inspect conditions and help when I could. I delivered supplies to schools and relief centers, and Iraqis who knew us would bring us tea and cigarettes. Language was the only barrier, but a friendly smile bulldozed that wall.

I saw men moved by the death of innocents and was with those same men when they killed those responsible. On June 24, 2004, insurgents detonated several car bombs around the city of Mosul, killing over one hundred -- no cops, no Iraqi national guardsmen, no Americans -- all innocent civilians. Cars were covered in blood as if they'd been hit with a paint sprayer. My unit fought Zarqawi-backed insurgents in a firefight that lasted almost eight hours. Then people moved quickly to help out -- Iraqi civilians as well as American troops. But it shouldn't take a war for people to get along.

I don't justify our reasons for this war -- that's not a soldier's luxury -- and I don't justify what the insurgents have done to the Iraqis. But the passion of all sides -- Iraqi, American, ally and insurgent -- shows that if man can redirect his energies to one of acceptance and not intolerance, we can bring the zealot, the politician, the soldier and the outsider to a place where man is just that: man.

Many say that I'm cut off from the real world, but I believe they are the ones missing the truth. For all the death and destruction reported in the news, there are thousands of stories of kindness and caring that no one ever knows.

I believe that by striving for a world that accepts its oneness, we can transform wars, intolerance, religious persecution and political extremism into memory and maybe even folklore.

Azar Nafisi: Mysterious Connections that Link Us Together July 18, 2005
Warren Christopher: A Shared Moment of Trust Jan. 23, 2006
Miles Goodwin: The Connection Between Strangers May 1, 2006

Haibi's Blog, 'Candle in the Dark'