Accessibility links
Tech Solutions to Iraqi-U.S. Language Barrier Part of the daily struggle for soldiers and Marines in Iraq is communicating with civilians. Few military personnel have enough fluency with Iraqi Arabic to be easily understood, and translators are in short supply. But small, hand-held devices may help close that communications gap. 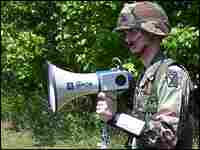 An Army private shows how the Voice Response Translator (VRT) -- the small gray box with black speaker -- can be used with a megaphone to address large groups in the field. Integrated Wave Technologies hide caption

Hear how some common commands from U.S. military personnel would sound when translated by the Phraselator, built by Voxtech International:

'Thank you for cooperating.'

'Remove everything from your pockets.'

'We have to detain you.'

'There is no pork in this food.' 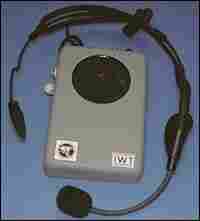 Hundreds of phrases can be loaded into the Voice Response Translator (VRT) and programmed by translators to give commands in 16 languages -- but it can't yet translate Arabic back into English. That technology is still a decade away. Integrated Wave Technologies hide caption

Part of the daily struggle for soldiers and Marines in Iraq is communicating with civilians and suspected insurgents. Few military personnel have enough fluency with Iraqi Arabic to be easily understood, and field translators are in short supply.

But technology may help close that communications gap. A hand-held voice translator device developed by Integrated Wave Technologies, already in use in other parts of the world, converts simple English commands into Iraqi Arabic or 15 other languages.

When the soldier says a simple phrase -- for example, "keep kids back" -- the Voice Response Translator (VRT) matches that command to a more complex phrase in Arabic. In this case: "Keep your children back from us or we will take action against you."

Integrated Wave Technologies President Tim McCune says simple communications like these can save lives, both among Iraqi civilians and military personnel. "This removes pulling the trigger as the first option in dealing with foreign nationals," he says.

Dr. Mari Maeda, a researcher at the Defense Advanced Research Projects Agency (DARPA) says the government has spent $15 to $20 million a year over the past five years developing the mobile translator technology, because there aren't enough human translators to go around. Critics say the Defense Department should instead spend its dollars training troops how to speak Arabic or other languages.

One advantage of these portable translation devices is that they can be programmed by a local interpreter to fit different missions. John Hall, president of Annapolis-based Voxtech International, makes a similar device called the Phraselator.

Hall believes technology can help a military unit make better use of one human interpreter. "You don't have to keep [the translator] there in potential harm's way all the time," he says.

What soldiers say they really could use are small, hands-free devices that translate speech in both directions, as people talk to them. DARPA has some early prototypes of such a device, but they are at least a decade away from being combat-ready.