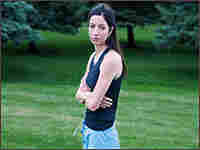 Shelly, 25, is one of four women profiled in the HBO documentary Thin. She is shown at her home in Salt Lake City, six months after leaving Renfrew Center, a clinic for eating disorders. Lauren Greenfield hide caption

A documentary premiering tonight on HBO takes an unflinching look at eating disorders and the tangle of cultural and psychological issues behind them.

Thin follows four clients at an eating-disorder treatment center in Florida. With a fly-on-the-wall approach, director Lauren Greenfield explores the dangerous obsession with thinness, the rules and rituals behind anorexia and bulimia, and the complex process of treatment.