Accessibility links
Why Americans Relish Cranberries Colorful and good for you, cranberries turn any meal into a showstopper. But their glamorous exterior belies a bitter truth: Raw cranberries are mouth-puckeringly sour. These recipes make the most of the edible jewels. 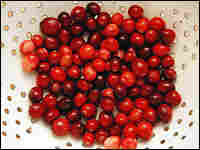 Cranberries are perfect, edible jewels packed with antioxidants and vitamins. They turn any meal into a showstopper. Scroll down for duck with cranberries and wine, Nantucket cranberry pie, more. Andrew Pockrose hide caption 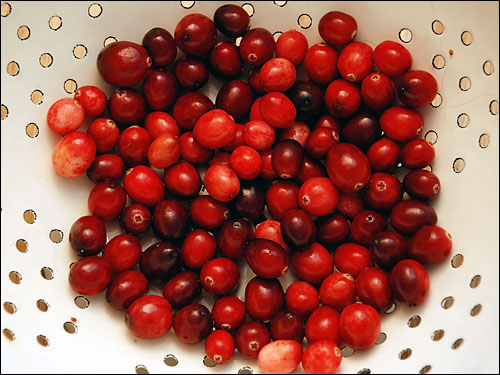 Cranberries are perfect, edible jewels packed with antioxidants and vitamins. They turn any meal into a showstopper. Scroll down for duck with cranberries and wine, Nantucket cranberry pie, more. 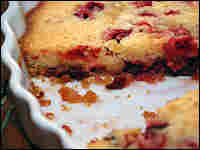 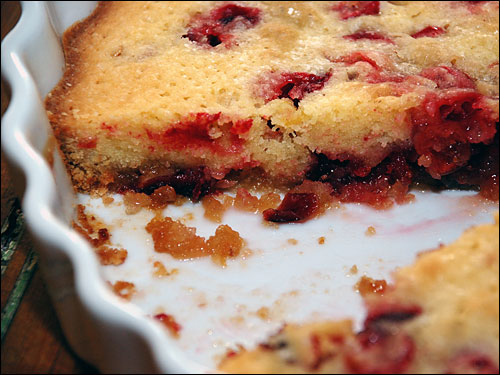 Betsy Block, a Boston-based freelance writer, is a regular contributor to Kitchen Window and the voice of the blog Mama Cooks.

America's dinners will get very colorful in the next couple of weeks. Most of us will eat lots of green vegetables and an abundance of orange, from sweet potatoes to pumpkin pie. But the star of the plate will be that Thanksgiving peacock, the cranberry.

Cranberries are grown in the northeastern United States, Wisconsin, Washington and Oregon, as well as in Canada. Massachusetts has the oldest cranberry story — some vines date to the time of the Pilgrims. When colonists arrived in North America, they found a cranberry that was twice the size of the berries they were used to back in Europe, though just as tasty. (America has been super-sizing portions from the very start.) Today, Wisconsin is the country's leading cranberry producer.

Natural bogs evolved in Massachusetts from glacial deposits, which, over time, filled up with water and decaying matter. The resulting layers of sand and organic material comprise the ideal soil for cranberries. Last month in Plymouth County, Mass., the red-dotted landscape was evidence of thousands of years of geological evolution.

Today, of course, farmers don't just leave their harvests to the whims of nature. Contemporary cranberries are cultivated.

They have to be. Americans will eat 400 million pounds of the tart little berries this year, 20 percent of them during Thanksgiving week.

Cranberries are perfect, edible jewels. They turn any meal into a showstopper. But their glamorous exterior belies a bitter truth: They're virtually inedible as they are. Raw cranberries are mouth-puckeringly sour, which is why they're almost always paired with sugar or some other sweetener such as maple syrup.

Fortunately, they're redeemed not just by their striking good looks but also by their extensive health benefits. Cranberries are rich in antioxidants and phytonutrients. Research indicates they may reduce the risk of heart disease, stroke, urinary tract infections, gum disease and ulcers. They're also high in vitamins A and C and in potassium. The tiny berries pack a powerful nutritional punch.

They're not only gorgeous, healthful and delicious, they're fun — particularly for those of us who still like to play with our food. Small pockets of air within each berry mean they both float and bounce. This is more than a fun fact, though. This air pocket actually determines how the berries are harvested.

The berries we see in stores each fall have usually been dry-harvested. So while they might not be quite as colorful, they keep better.

But most cranberries are wet-harvested, which means the bog is flooded and the berries float to the top, where they're easily scooped up by farmers in waders. These can be a bit redder than the others; they're usually used in processed foods, juices and sauces.

Of course, indigenous people have been cooking with cranberries for hundreds of years, long before wet harvesting was even invented, according to Eleanor Jackson of Plimoth Plantation in Plymouth, Mass. Wampanoag Indians in Massachusetts laboriously picked the berries from the vine and added them to porridge or pounded them by hand into what she calls "the original fruit leather."

It's debatable whether cranberries were present at the "first Thanksgiving" (which was not, in fact, a thanksgiving but a shared harvest celebration). If they were served at that special meal hundreds of years ago, it was almost certainly not in a sugar-sweetened sauce.

More likely, the Wampanoag guests brought dishes containing unsweetened berries. If the English used cranberries, it was probably to add tartness and color to a sauce (as in the duck recipe below.) It wasn't until years later that the colonists started sweetening them with sugar.

Regardless of who used them, when and how, there's one timeless truth about cranberries: It's a shame not to use them year round. And while their growing season is over for now, they freeze extremely well. There's one more thing to love about cranberries: No need to thaw them before using.

So come February, when everything's looking drab, grab some cranberries from the freezer, whip up a simple pie or sauce, invite some friends over and turn an otherwise average midwinter Sunday supper into a colorful feast.

Duck with Cranberries and Wine 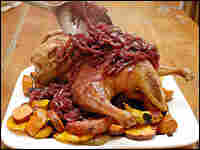 This recipe is from Giving Thanks: Thanksgiving Recipes and History, from Pilgrims to Pumpkin Pie (Clarkson Potter 2005) by Kathleen Curtin and Sandy Oliver. "It is the sort of dish," they write, "that would have occupied a place of honor on a fine feast table in 1621." They offer both original and modern versions.

To Boil A wilde Duck Trusse and parboyle it, and then halfe roast it, then carve it and save the gravey: take store of Onyons, Parsley, sliced Ginger, and Pepper: put the gravey into a Pipkin with washt currins, large Mace, Barberryes, a quart of Claret Wine: let all boyle well together, scumme it cleane, put in Butter and Sugar. -- John Murrell, The Newe Booke of Cookery, 1615

Handful of parsley leaves and stalks

Rinse the duck inside and out and rinse any giblets included. Place the duck and giblets (except the liver, which can be reserved for another use) in a pot large enough to accommodate them, along with 2 teaspoons of the salt, the peppercorns, the onion quarters and parsley leaves and stalks. Cover with cold water and bring to a simmer over high heat.

Reduce the heat so that the broth stays at a very low simmer. Skim off the froth, cover and simmer for 45 minutes.

After the duck has cooked for 45 minutes, preheat the oven to 400 degrees.

Arrange the sliced onions in a 13-inch-by-9-inch roasting pan. Carefully remove the duck from the broth and reserve the broth. Season the duck inside and out with the remaining 1/2 teaspoon of salt and the ground pepper, then place the duck on top of the onions. Roast the duck for 25 minutes. Remove from the oven, place the duck on a carving board and cover loosely with aluminum foil to keep it warm.

While the duck is resting, make the sauce.

Strain 1 cup of the reserved broth and place in a saucepan along with the onions from the roasting pan, the wine, parsley, ginger, currants and mace. Boil over medium-high heat until the mixture is reduced by two-thirds and has a syrupy consistency.

When the duck has rested for at least 10 minutes, carve it into serving pieces. Place the meat on a heated serving platter and cover loosely with foil.

Add any juices given off during carving to the sauce and stir in the cranberries and sugar. Simmer for another 30 seconds, then remove from heat. Swirl in the butter, a tablespoon at a time, until the sauce is silky.

Serve the duck immediately, accompanied by the sauce.

Note: If you simmer the leftover defatted duck broth until it is reduced to one quarter of its original volume, it makes a very useful stock. Store in the freezer until needed. 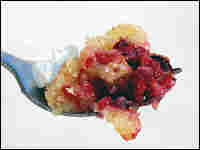 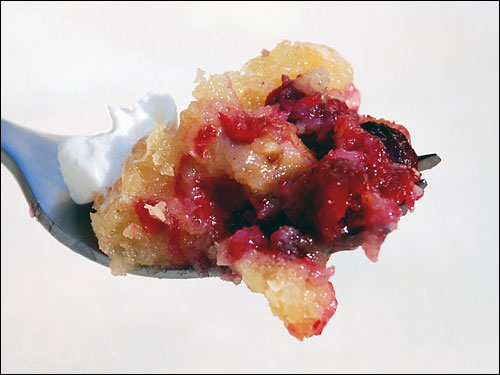 Butter, to grease a pie plate

Place the cranberries in a buttered, 9- or 10-inch pie plate. Toss the sugar and walnuts, and sprinkle over the berries.

Mix together the eggs, butter, sugar, flour and almond extract until smooth.

Pour the topping over the cranberry mixture and bake for 40 minutes. 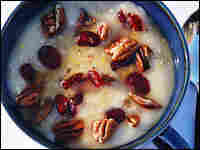 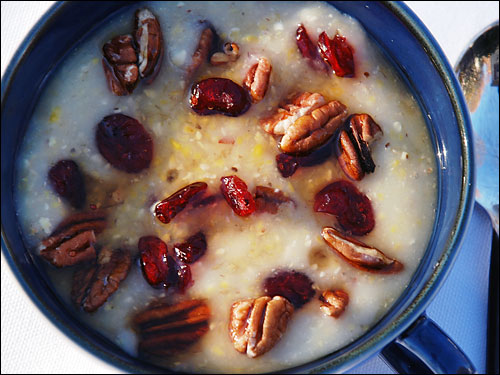 This Wampanoag recipe, which makes a warm and soothing breakfast, dates back hundreds of years (with a few nods to modern tastes). This is a version from Darius Coombs and Eleanor Jackson of Plimoth Plantation.

Cranberries (dried, fresh or frozen, as much as you want)

Put the cornmeal in a pot, cover with water and simmer until the porridge is thick and creamy. If you're using fresh or frozen berries, put them in at the start. If you're using dried, add them at the end.