Accessibility links
Iran and the U.S., Divided by Stereotypes As they debate controls on nuclear development, the United States and Iran labor under stereotypes that shape the discussion. This report comes in advance of Ted Koppel's documentary on the Discovery Channel, Iran. The Most Dangerous Nation. The special airs this Sunday.

Listen
Iran and the U.S., Divided by Stereotypes

As they debate controls on nuclear development, the United States and Iran labor under stereotypes that shape the discussion. This report comes in advance of Ted Koppel's documentary on the Discovery Channel, Iran. The Most Dangerous Nation. The special airs this Sunday.

Robert Gates, newly nominated as defense secretary, will soon weigh in on waging the war in Iraq and on U.S. relations with Iran. That country is the focus of a new documentary from NPR senior news analyst Ted Koppel and the Discovery Channel. The documentary is called Iran: The Most Dangerous Nation. It took Koppel back to the scene of the 1979 hostage crisis. That event prompted his launch of the ABC news program Nightline.

Today in downtown Tehran, the site of the hostage taking has 15-foot high walls covered with fading anti-American graffiti. Ted Koppel's report for us begins there.

TED KOPPEL: This is what used to be the U.S. embassy, until a bunch of radical students back in November of 1979 seized it and took all the Americans inside hostage.

There are other reasons why the U.S. government considers Iran to be dangerous these days, but if you want to talk about the roots of American resentment toward this country, what happened inside the U.S. embassy here is a pretty good starting point. But raise that with almost any Iranian and he or she will respond by saying, ah, yes, but look at what you guys did back in 1953, when the CIA conspired with British intelligence to overthrow the freely elected Prime Minister Mohammed Mossadegh, replacing him with the shah.

That's essentially the way you can define U.S.-Iranian relations these days. Tit for tat. Grievance for grievance.

When we talk about Iranian support for terrorist organizations like Hamas and Hezbollah, they talk about U.S. support Saddam Hussein during the long and bloody Iran-Iraq war in the 1980s. The U.S. complains about Iran's current quest for nuclear technology. The Iranians point out that the British, the Germans, the French and, yes, the United States, were encouraging the shah to develop that very same technology in the late '70s.

What horrifies U.S. policy makers is the prospect of Iran armed with nuclear weapons. The question, of course, is what if anything the U.S. can do to prevent that from happening.

Still, normalized relations with the United States must hold some appeal. I raised that issue with Iran's former foreign minister Ibrahim Yazdi. A vigorous 70-something, he's still actively engaged in Iran's reform movement. We spoke in one of the grand halls of what is now a museum but what used to be one of the shah's many palaces.

If President Ahmadinejad would agree not to continue the enrichment of uranium in this country, it would open all kinds of doors to cooperation with the West and most especially with the United States. Why is he so adamant about not doing that?

Mr. IBRAHIM YAZDI (Former Iran Foreign Minister): Americans and Europeans, they complain against Iran in four categories: human rights, nuclear issue, peace in Middle East, and their support of terrorism. If Iran overcome this crisis, accepting the arrangement(ph), then immediately the question of human rights (unintelligible) will come up. And they are very vulnerable on that issue.

KOPPEL: The nuclear issue, in other words, is a useful distraction. President Ahmadinejad is just as happy to keep U.S. attention away from Iran's human rights abuses, but even more significantly, away from its growing influence throughout the Persian Gulf.

That influence is huge in neighboring Iraq. But Washington and Tehran don't talk to one another. As one senior U.S. policy maker told me, we've had more diplomatic contact with North Korea than with Iran.

What has received far more attention is the option of U.S. military intervention. The Ayatollah Hadavi, a hardliner, sees that as a real possibility. I asked him if he thinks the Bush administration is trying to provoke a war with Iran.

Ayatollah HADAVI: I think so.

KOPPEL: But then the Ayatollah Hadavi also believes that 9/11 gave the Bush administration exactly what it was looking for.

Ayatollah HADAVI: I think because there was a crisis inside Afghanistan and they wanted to control this crisis by making another crisis in another country, and therefore they came to Iraq and they said, okay, it is - there are many mass destruction weapons and so on, and they came to Iraq. And now they're talking about the oil of Iraq and the power in the region, the power in the Middle East. Okay, now we can analyze. How much harmful was the 9/11 for America and how much beneficial was it? I think it was more beneficial than the other issues.

KOPPEL: Absent diplomacy and with the general ineffectiveness of economic sanctions, Washington would appear to be left with only a military option. I raised that issue with former foreign minister Yazdi.

There is the hope, the expectation even, among some circles in Washington that if there were some precipitating event, maybe a bombardment, maybe some ground attack in which the United States would come into Iran, that it might cause the uprising.

Mr. YAZDI: They're mistaken. I don't believe that one. Any harsh treatment against the present authority in Iran by a foreign country such as United States will benefit them more than they can imagine.

KOPPEL: Nasr Hadian(ph) is a childhood friend of Iran's President Ahmadinejad. A political scientist, he has spent considerable time in the United States and is well known among American academics.

We spoke in the kitchen of his sister's apartment, just about a block from Ahmadinejad's home. Hadian spelled out for me what kinds of unforeseen problems might confront the United States.

Mr. NASR HADIAN (Political Scientist): In case if you were supposed to take any sort of military action, they know that they have to pay a heavy cost. Iran has to - Iran has the capability to retaliate.

Mr. HADIAN: As I mentioned, they have developed military, intelligence, security, infrastructure in Iraq and Afghanistan and the places which I've mentioned. And they are going to use that in case they are being attacked.

KOPPEL: So spell it out for me. The deterrence is that Tehran is effectively saying to Washington, implicitly, you think you've got problems in Iraq right now? You just wait and see how bad your problems could be.

KOPPEL: You think you've got problems in Afghanistan right now? We could make those problems ten-times as bad.

KOPPEL: The death to America chants that were first inspired by Ayatollah Khomeini, the revolutionary, the severe forbidding, anti-Western, anti-American religious leader, are still heard today more than 25 years later during Friday prayers at the University of Tehran.

KOPPEL: In the streets of Tehran after prayer.

KOPPEL: And in the indoctrination of the very youngest, the newest generation of Iranians, small boys on their first day of school.

KOPPEL: Death to America. These little boys, like the others, go through the motions without much passion as they begin their indoctrination against what their leaders tell them is the most dangerous nation: America.

It flies in the face of public polling in Iran which indicated that more than 70 percent of the population favored better relations with the United States.

Which brings us back to Robert Gates, named by President Bush to succeed Donald Rumsfeld at the Pentagon. Not only has Gates long been an advocate of reestablishing talks with Iran, it's believed that the bipartisan committee headed up by former Secretary of State James Baker may propose just that as a step toward disengaging the United States from Iraq. But now that it appears that Washington may be ready, will Tehran be willing? Don't count on it. At least not if the price is giving up their nuclear technology.

This is Ted Koppel.

BLOCK: The documentary, Iran: The Most Dangerous Nation, airs Sunday at 9:00 PM Eastern on the Discovery Channel. There are video excerpts at NPR.org.

Koppel: Inside Iran, 'The Most Dangerous Nation' 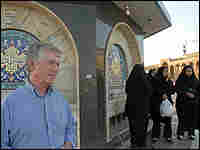 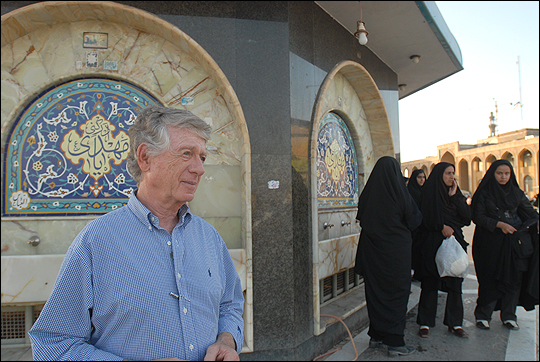 Clips from the Documentary 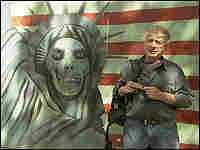 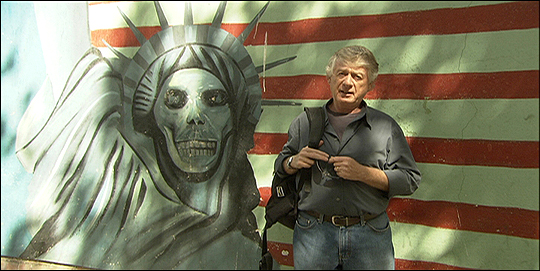 Koppel in front of the former U.S. Embassy Wall in Tehran.

More on the Documentary

You can find more information about the documentary, which premieres on Sunday, Nov. 19 at 8 p.m. ET/PT, at the Discovery Channel Web site. 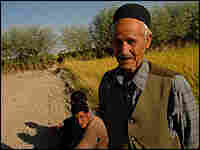 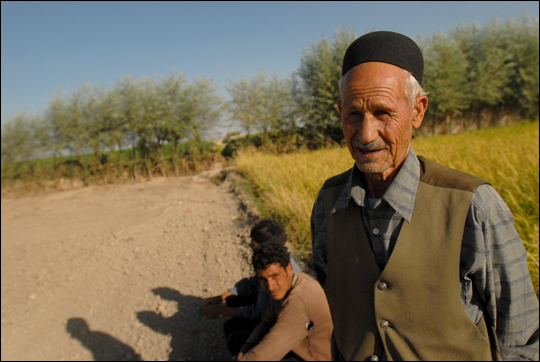 Village elder Jaafar Hosseini with workers near a rice field outside of Isfahan, Iran.

In the midst of the international crisis over Iran's nuclear program, journalist Ted Koppel spent three weeks speaking with people around that country.

In his documentary, Iran -- The Most Dangerous Nation, Koppel reports on how Iranians view the policies of Iranian President Mahmoud Ahmadinejad, and what lies at the root of decades of deep-rooted distrust between Iran and the United States.

Koppel's reporting experience with Iran stretches back to 1974; most famously, he covered the U.S. embassy hostage crisis in 1979.

Today, he characterizes the U.S.-Iranian relationship as "tit for tat, grievance for grievance."

For example, while the United States criticizes Iranian support for terrorist organization such as Hamas and Hezbollah, Iranians talk about U.S. support for Saddam Hussein during the Iran-Iraq war in the 1980s.

Koppel notes: "What horrifies U.S. policy makers is the prospect of Iran armed with nuclear weapons. What if they used them against the Israelis, or just gave them to their Hezbollah surrogates in Lebanon."

In the new Discovery Channel documentary, Koppel travels to the border of Iran's border with Iraq, the ancient capital of Isfahan, the holy city of Qom and the Persian Gulf.

He talks to Iranians from all walks of life -- businessmen, dissidents, former government officials and ordinary citizens -- to hear their thoughts on their country's leaders, nuclear ambitions and relations with the rest of the world.