Accessibility links
Afghan Colleagues Offer Critical Help in Reporting NPR's Renee Montagne and Jim Wildman spent the month of October reporting from Afghanistan. Local drivers and translators became indispensable in getting the stories about the places they live. 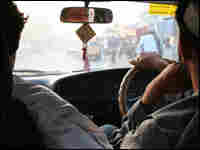 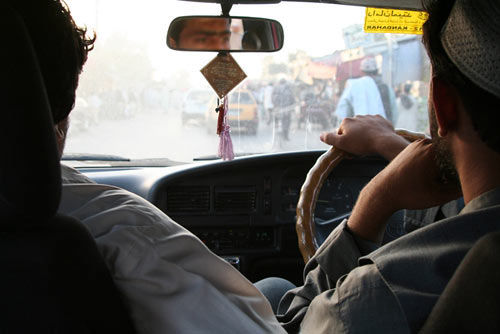 Qassim (left) and Qahir drive through central Kandahar. Best friends, they risked their lives -- cautiously -- to help NPR report from one of Afghanistan's most restive regions.

Danger on the Road

Before leaving Kandahar, Renee Montagne talks with Qahir and Qassim, two men with whom she worked while in the southern Afghan city. The car ride conversation begins with Montagne asking Qahir — her translator and local "fixer" — about their recent trip to the village of Panjwai. NATO troops and Taliban were fighting nearby, and Taliban were rumored to still be in the area.

NPR's Renee Montagne and Jim Wildman spent the month of October reporting from Afghanistan about how the country has changed in the five years since the U.S.-led invasion toppled the Taliban regime. Below, Wildman writes about some of the people who helped them.

There is a merchant along the road north of Kabul who sells children's toys. He lays out his wares in dizzying array on rickety folding tables. Renee and I spent a fair amount of time under his red canvas tent one day, shopping for toys.

Renee was headed for a reunion of sorts with former interviewees in Istalif. She wanted small trinkets -- keychain flashlights, plastic princess crowns, hard candy -- to hand out to kids she would see again in the village.

We lingered there along the road. A small crowd of children and women in burkas gathered around us. We collected piles of plastic toy bags. I snapped a few pictures.

But it was business as usual for Najib. Our Kabul-area translator stood by Renee's side and relayed her inquiries to the shopkeeper. He suggested toys that girls and boys in Istalif might go for. He haggled prices. And he kept mindful of our whereabouts in a war zone, where any situation -- even one around a toy table -- could turn dangerous.

We could not do our work in Afghanistan -- mundane or otherwise -- without men like Najib. Or without Zalmay, who drove us around Kabul and its lawless environs with precision and cheer. Or without Qahir and Qassim, who risked their lives guiding us through Taliban country near Kandahar.

We push them to ask our interviewees hard questions. We joke with them. We start to consider them friends. Even family.

Renee and I have left Afghanistan, but the work of our in-country colleagues goes on. Ivan Watson arrived in Kabul the week after we departed. Soon, NPR's new Kabul bureau chief will set up shop there.

The new bureau chief's work over the next two years -- the stories you hear on the radio -- will succeed or fail, based largely on the Najibs and Zalmays and Qahirs and Qassims of Afghanistan. These are young men with large hearts... and a talent for guiding us through one of the most fascinating stories of our generation.

Jim Wildman is a senior producer for Morning Edition.