Accessibility links
He's Shaken, We're Stirred Daniel Craig brings us a new James Bond in Casino Royale. He's not only rugged, fearless and a lethal weapon, but he's also vulnerable. This 007 falls in love, and wonders whether that might not be better for him than being a globe-trotting killer. This not only shakes him up, it shakes up the franchise in its 21st official outing. 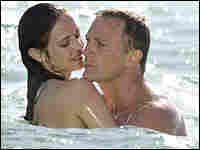 Daniel Craig brings us a new James Bond in Casino Royale. He's not only rugged, fearless and -- when the chips are down, as they often are in this poker-faced thriller -- a lethal weapon. He's also vulnerable.

This blond 007 falls in love, and wonders whether that might not be better for him than being a globe-trotting killer. This not only shakes him up, it shakes up the franchise in its 21st official outing. Bond as a human being? Who'd'a'thunk?

Of course, this Bond wasn't even born by the time Sean Connery had churned out five double-oh epics. The series already had turned silly by that time, with motorboats flying over bridges and car tailpipes turning into machine guns.

Craig brings it back to life, not with gadgets -- all he has is a nifty glove compartment -- but with derring-do that gets daring-done with panache. The chase on a construction crane is pretty breathless.

But his finest moment may be when he finds his girlfriend shaken after a machete battle in a stairwell (how's that for low-tech?), sitting in her bloodied evening gown in a shower.

Most men would turn the water off and pull her into their arms. Craig's Bond does something none of the blown-dry pretenders since Connery would ever have done: He joins her in the shower, not for sex or to make a joke, but because he's starting to fall for her, and she clearly needs a shoulder to lean on. And she leans.

A moment or two later, he's back playing poker. And not long after that, half a world away, a building is falling down around their heads.

But that moment of tenderness has done what decades of special effects haven't been able to do: made you care about what happens to 007. 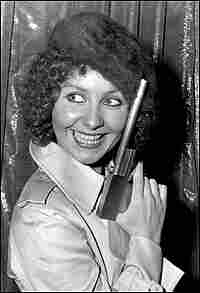 'For Your Eyes Only' (Sheena Easton)

Theaters around the country await the latest addition to the James Bond collection: a new version of Casino Royale.

It's being promoted as all new -- a new Bond (Daniel Craig), a new angle, new stunts, new "Bond girls." Yet in one way this new James Bond film will also prepetuate a much older Hollywood tradition: The theme song.

And we're not just talking about the familiar, driving James Bond theme. More than 20 times, Bond films have opened with an original song under the title credits -- something that used to be a Hollywood staple and is now a rarity.

Trudeau has even broken the songs down into three handy categories:

Story Songs (such as Shirley Bassey's wonderful version of "Goldfinger"); Bond Songs (including Nancy Sinatra's "You Only Live Twice"); and Nonsense Songs (A-ha's "The Living Daylights" makes that list.)