Accessibility links
Danes' Anti-Immigrant Backlash Marks Radical Shift Denmark, once the symbol of a welcoming and nurturing welfare state, is becoming part of an anti-immigrant backlash sweeping across Europe. Sentiments once associated with ultra right-wing parties are becoming mainstream. 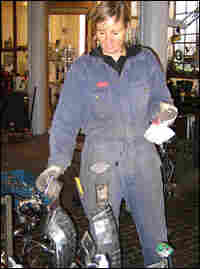 Sculptor/welder Charlotte Steem lives in Christiania, a Danish commune where freedom of speech is espoused. She says the violence with which some Muslims reacted to the Mohammed cartoons has undermined many of her convictions. Sylvia Poggioli, NPR hide caption Sculptor/welder Charlotte Steem lives in Christiania, a Danish commune where freedom of speech is espoused. She says the violence with which some Muslims reacted to the Mohammed cartoons has undermined many of her convictions.

A mood of nationalist introspection is sweeping over Europe. The Sept. 11 attacks, the bombings in Madrid and London, and the controversy over Danish Mohammed cartoons, are producing an anti-immigrant backlash bordering on xenophobia. Sylvia Poggioli has an overview. Karen Jespersen, a former Danish interior minister in charge of immigration, co-authored the country's No. 1 best-seller Islamists and Naivists. She says the Islamic radicals' goal is the Islamization of Europe. ArtPeople hide caption Syrian-born Naser Khader is one of the Danish parliament's most vocal opponents of Islamic radicals. He says the integration debate is roiling among Muslims themselves. AFP/Getty Images hide caption

An anti-immigrant backlash, bordering on xenophobia, is sweeping across Europe. Sentiments once associated with ultra right-wing parties are becoming mainstream. Many taboos are being broken -- nowhere more starkly than in Denmark -- the erstwhile poster child of the welcoming and nurturing welfare state.

Earlier this year, that haven of solidarity and liberalism was shaken by violent protests and deaths in the Muslim world over cartoons of Mohammed that were published in a Danish paper. Suddenly, Danes began to see their own Muslim immigrants as a threat to their national identity.

The cartoon crisis hit hard in the Copenhagen commune of Christiania, a bastion of the counterculture where freedom of speech is the paramount value.

Sculptor/welder Charlotte Steem, one of the commune's 800 residents, says the violence with which some Muslims reacted to the Mohammed cartoons has undermined many of her convictions.

"There are a lot of things I don't understand in [the] Muslim world," Steem says. She recognizes the free society of her country but says she doesn't know whether borders can remain open.

Only a few years ago, Denmark was proud of its open-door policy, and even the mildest critique of immigration would have been labeled racist.

But the mood shifted after Sept. 11, and the terrorist attacks in Europe. After many years of leftist rule, a right-wing government came to power, introducing Europe's toughest immigration laws.

Today, the Danish political discourse is no longer stifled by political correctness. The tone can even be inflammatory. One politician has called for the internment of some Muslim radicals in Denmark for security reasons.

And last year, a radio station went so far as to call for the extermination of all radical Muslims.

The difficulty of integrating Muslims who don't share Western values is the No.1 topic of discussion.

Currently, the nation's best-selling book is called Islamists and Naivists.

"We compare Islamism to Nazism and communism because they are all three of them a totalitarian ideology," says Karen Jespersen, who co-wrote the book with her husband, Ralf Pittlekow.

Their politically incorrect analysis would suggest they're right-wingers. But they're diehard Social Democrats -- proud veterans of the student protests of the 1960s.

Jespersen, a feminist and a former interior minister in charge of immigration issues, says the radicals' goal is the Islamization of Europe. When she was in government, many Muslims told her they were not free to adapt to Western society.

"In the parallel society, they use the term 'Muslim police,'" she says. "They are trying to control the more moderate Muslims. If they see their daughters talking to boys, then they go to the fathers and say, 'I saw your girl talking to a boy, and how can you let her? You have to stop it immediately.'"

The concept of the cradle-to-grave welfare state is so deeply embedded in the Danish psyche that even the conservatives don't dare touch it. But many Danes say their social pact has been undermined by the large inflow of immigrants -- many of whom don't share Danish civic values and, they say, prefer to live on the dole rather than work for the minimum wage.

"A welfare state can only function if there are restrictions on the border," says Soren Espersen, a leading member of the right-wing Danish People's Party, which has had increasing electoral success running on an anti-immigration platform.

The government depends on the party's parliamentary support to pass bills.

Espersen points out that thanks to new laws, annual immigration has declined to 2,000 last year from 27,000 in 2001. Asylum for refugees has also dropped sharply.

And the only way to combat it is through integration and education, he says.

Commentator David Trads says there is such a broad political consensus that the DPP has become mainstream.

"We want as few new immigrants as possible," Trads says. "This is new; this is not how it was five years ago."

One of parliament's most vocal opponents of Islamic radicals is Syrian-born Naser Khader, who says the integration debate is roiling among Muslims themselves.

Khader says many Muslims in Europe want to break their ties with their land of origin and declare their loyalty to their new Western homelands.

"But the Islamists don't like this," he says. "They want the mullahs and imams in Muslim countries [to] decide what the Muslims in Europe should do."

Khader insists that Islam and the West are not grappling with a clash of civilizations.

"It is clash between ideologies, democracy and not democracy," he says. "Between those who want democracy, modernity, respect for human rights, equality between gender, and the others who want the opposite."

Khader says it will be a long battle and won't be won during his lifetime.