Accessibility links
'Made in China' Is Cheap No More South China is the world's factory floor. For years, it has churned out cheap products like toys, shoes and clothing. But now rising costs — and shifts in Chinese government policy — are knocking hundreds of smaller factories out of business.

Listen
'Made in China' Is Cheap No More 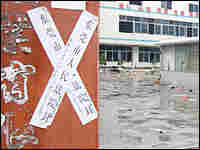 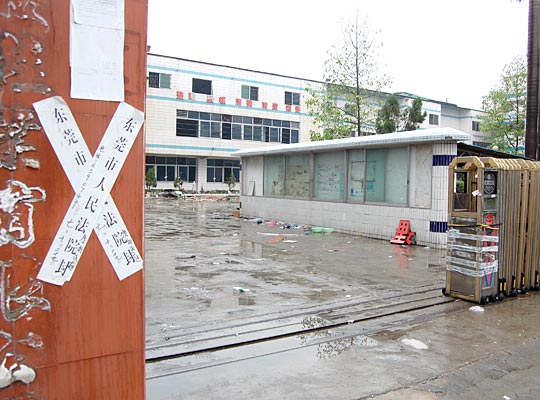 The Ding Fu factory is one of 1,000 shoe factories that went under last year in southern China's Guangdong province. A bankruptcy seal marks the front gate. 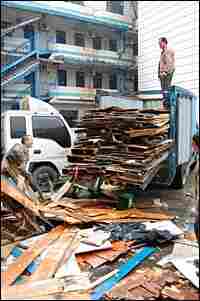 Workers from a recycling company strip the factory in order to sell parts to other plants in China's interior and in Vietnam. Frank Langfitt, NPR hide caption 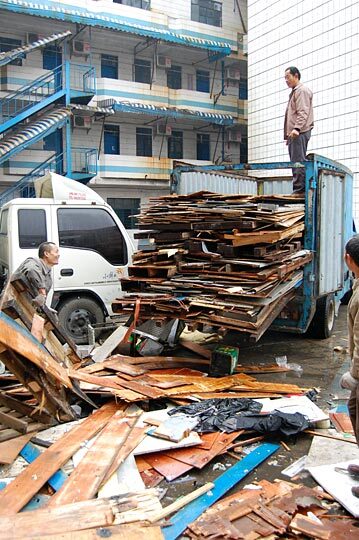 Workers from a recycling company strip the factory in order to sell parts to other plants in China's interior and in Vietnam. 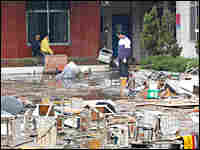 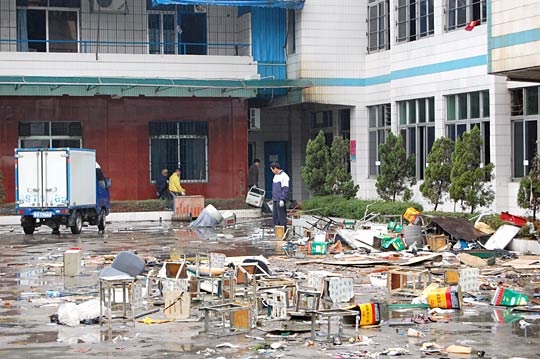 South China is the world's factory floor. For years, it has churned out cheap products like toys, shoes and clothing. But now rising costs — and shifts in Chinese government policy — are knocking hundreds of smaller factories out of business.

As profit margins disappear, some companies are even moving to lower-cost countries such as Vietnam. In fact, according to China's state-run press, 1,000 shoe factories closed in Guangdong province in 2007.

On a recent visit to the now-shuttered Ding Fu Shoe Factory, workers for a recycling company were stripping the facility of equipment to sell to other plants in China's interior or Vietnam.

The factory gates were wide open and there were signs the plant had been abandoned suddenly. Straw mats still littered the floors of dorm rooms where workers once slept. Torn shoe soles and broken swivel chairs lay in puddles around the courtyard.

The head of the recycling firm, a man named Huang Jin, says the factory boss had fled several months ago, leaving hundreds of workers unpaid. Huang says his company had a banner year in 2007, stripping 30 or 40 bankrupt shoe factories.

Factories have gone bankrupt for several reasons. Huang says one is a labor shortage, as workers can find more jobs elsewhere than ever before.

"If a boss opens up a factory, it's very hard to find workers," he says. "And even if you find workers, they're not skilled. They don't know how to make shoes."

Guangdong province is home to tens of thousands of factories and the engine of China's industrial economy. Some Chinese dream of running a factory here. But Huang says the conditions are so bad now, it's safer to keep stripping them.

Last year, he was thinking of starting a motorcycle fuel business. But a friend who already owns a fuel plant talked Huang out of it.

Shoe factories aren't the only ones struggling. Last year, Lacquer Craft Furniture laid off one-third of its 6,000 workers in South China's Dongguan City.

The company's head, Samuel Kuo, says he couldn't afford to pay rising labor costs. Other factories have been pinched by increasing costs for materials such as glass, paint and steel pipe.

" 'Made in China' isn't cheap anymore," Kuo says. "The low value-added products will have a hard time surviving in China ... because the costs here are too high."

Instead of making it easier on these factories, China's government is making it harder. After encouraging cheap manufacturing for more than a decade, the regime wants to push investment toward high-tech. Last summer, it reduced a tax rebate to squeeze low-end exporters.

Fred Chen, who runs the Taiwan Furniture Manufacturing Association in China, says the days when the government welcomed cheap factories are over.

"Before, when China was poor, any kind of factory could come in," he says. "They [gave] you a lot of preferential treatment — no taxes, cheap rent."

But today, China is the world's fourth-largest economy and a rising global power. It wants more sophisticated factories with higher-wage jobs. Sounding like a jilted boyfriend, Chen explains the change with a Chinese idiom.

"We say the government breaks the bridge after crossing the river," he says. "We helped you develop. Now you're dumping us, you're kicking us out."

If Chen sounds bitter, he says he isn't. He may not like the new policy, but he says it's a natural progression. China is just trying to follow countries like Japan and Taiwan, which climbed the manufacturing ladder from low-end to high-tech.

But that leaves many small firms struggling, such as Creation Furniture, which had to close two of its three factories in the past year.

In addition to losing much of the tax rebate, the company is losing money because of the rising value of China's currency, the renminbi. The Chinese government is allowing the renminbi to appreciate against the dollar. But as the renminbi goes up, the money the company gets for each piece of furniture goes down.

Becky Song, the company's sales manager, points to a coffee table in her office and explains. Two or three years ago, she could get 800 renminbi for the table. Today, she only gets 730.

Song says profit margins at some companies like hers have evaporated, and at least 30 companies have moved to Vietnam in the past year to save money. Others in the industry put the figure higher.

"If you keep doing this, you keep losing (money)," Songs says, "and no one can survive."

There is little optimism about low-end factories in South China. One Hong Kong businessman in Guangdong says the era of such small manufacturers is ending, and he expects 1,000 more to close in the coming months.