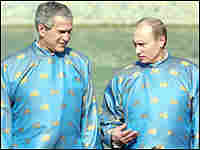 The Asia-Pacific Economic Cooperation summit wraps up Sunday with a statement condemning North Korea for conducting a nuclear test.

The statement, which was not put in writing, urges North Korea to resume negotiations in the aftermath of the reclusive country's nuclear test Oct. 9. Concerns over North Korea's nuclear threat dominated discussion at the economic summit.