Accessibility links
Tapes Provide First Glimpse of Secret Gitmo Panels Audio recordings obtained by NPR provide a view into the secret world of military tribunals for terrorism suspects at Guantanamo Bay, Cuba. The evidence is slim at the unclassified sessions attended by detainees, and few, if any, witnesses are called. 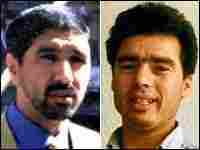 Hadj Boudella (left) and Mustafa Ait Idir were arrested in Bosnia on suspicion of plotting to bomb the U.S. and British embassies in Sarajevo. After their acquittal by a Bosnian court, they were taken into custody by U.S. officials and sent to Guantanamo Bay, Cuba. Family photos hide caption

Listening In on Tribunals

Though scratchy and of poor quality, hours of audio recordings obtained by NPR provide a window into the tribunal proceedings that affirmed Boudella's and Ait Idir's classification as enemy combatants. The two men are only allowed to call as witnesses the other men with whom they were arrested, and the unclassified evidence presented against them is slim. The tapes also hint at the conditions under which the men are held.

Listen to audio excerpts from the proceedings against Boudella and Ait Idir:

Tribunal President Instructs Ait Idir of His Rights, Inquires About His Shackles

Ait Idir Says U.S. Soldiers Broke His Fingers: 'I Was Bound from My Hands and My Feet'

Boudella Questions a Fellow Detainee: 'Do You Know If I Am a Terrorist?'

Boudella Expresses Faith in the U.S. Justice System: 'I Am Really Innocent'

Ait Idir Expresses Disbelief Over the Lack of Evidence Against Him

Mark Denbeaux, a lawyer for two of the terrorism suspects held as enemy combatants at Guantanamo Bay, has released a study of the hearings that gave them that status. In an interview with Robert Siegel, Denbeaux denounces the hearings as a sham, saying they provided the accused with little opportunity to contest allegations against him.

Hear Denbeaux Discuss His Analysis of the Tribunals Nov. 20, 2006

The recordings reviewed by NPR concern the military tribunals for six Algerians who were arrested and later acquitted in Bosnia for a suspected bombing plot. They were then taken into U.S. custody and sent to Guantanamo Bay. Read declassified documents in the case:

Audio recordings obtained by NPR provide the outside world with its first window into the secret world of military tribunals at the U.S. prison camp for terrorism suspects at Guantanamo Bay, Cuba.

The recordings, made by the U.S. military, are of tribunals held in the fall of 2004 to review the "enemy combatant" status of six detainees who were arrested in Bosnia in late 2001. Lawyers for the men obtained the tapes under the Freedom of Information Act and provided NPR with copies of the recordings.

The Combatant Status Review Tribunals are held in small, low-ceiling trailers at Guantanamo Bay. The Pentagon describes the proceedings as an administrative process, so the detainees are not allowed lawyers. There's a court reporter, a translator and a panel of three military officers to whom detainees tell their story, ask why they are being held, and appeal for release.

The audio recordings of the Combatant Status Review Tribunals are scratchy, of poor quality and don't pick up much of what's happening in the small room: You can't sense facial expressions or body language, or that the detainee's arms and legs are shackled.

However, you can hear the tribunal president inquire after the health and comfort of Mustafa Ait Idir, one of several men whose tribunal tapes were reviewed for this story.

"Are those on too tight?" the panel president asks, referring to the shackles on Ait Idir's hands and feet.

"He says, 'I've had them on for a very long time,'" a translator responds for the detainee.

No Set Pattern for Proceedings

Testimony at the tribunals doesn't appear to follow any set pattern. Some start with questioning from the military officers. At others, the detainee will launch into a speech about how they were arrested and sent to Guantanamo, and how they're being treated at the detention camp. Ait Idir speaks through a translator for almost an hour before the tribunal president interrupts him to inquire further about an incident of alleged abuse.

"Are you saying a soldier in Guantanamo Bay, Cuba, broke your fingers?" the tribunal president asks.

"Soldiers took me and they placed me on the ground in the rocks outside. They bound my hands and my feet," Ait Idir responds through a translator. He goes on to describe brutal treatment allegedly at the hands of U.S. soldiers.

Ait Idir is one of six Algerians who lived in Bosnia for about a decade before being arrested shortly after the terrorist attacks of Sept. 11, 2001, on suspicion of plotting to bomb the American and British embassies in Sarajevo.

The men were held for three months, until Bosnia's Supreme Court acquitted all of them. Ait Idir and the others tell the tribunal that when they walked out of the police station as free men, they were quickly arrested again by Bosnian and U.S. officials, put on a plane and sent to Guantanamo.

Learning of the Accusations Against Them

Hadj Boudella, one of the other detainees, tells the military panel at his tribunal that this is the first time he's heard some of the accusations against him.

What's striking is that, despite not knowing fully why they're being held, enduring open-ended detentions and sometimes harsh interrogations, the detainees on these audio tapes express faith that truth will prevail. Boudella tells the panel that his lawyers -- at the Boston firm Wilmerhale -- sent him a letter telling him not to participate in the tribunal for fear of incriminating himself.

"I want to show you that I am really innocent, and I want you to see I can defend myself," Boudella says on the recording. "If you're innocent, no matter how people try to cover your innocence, it will come out."

The detainees question the panel about the evidence against them and ask for proof, rather than just allegations. The audio recordings and transcripts show that the unclassified evidence is slim; for example, just a rundown of allegations, petitions for habeus corpus, which challenges the prisoners' detention, and affidavits attached to those petitions; one has a letter from Ait Idir's wife. At one point, Ait Idir expresses disbelief over the lack of proof and tells the panel he hoped it had more evidence it could give him.

"If I was in your place, but if a supervisor came to me and showed me accusations like these, I would take these accusations and I would hit him in the face with them," he tells the panel, apologizing for being so blunt.

Ait Idir, Boudella and the others on the recordings all ask that they be allowed to provide the tribunal with additional evidence, such as a copy of the decision by Bosnia's Supreme Court, showing their acquittal.

One detainee asked that his supervisor at the Red Crescent Society in Bosnia testify at the proceeding. He is told that a request was made twice to the U.S. State Department, which handles the matter; each time, the date of the tribunal was emphasized. The tribunal president says there was no response from the State Department to either request.

In some cases, the detainees' representatives don't know what efforts have or are being made to locate requested evidence. The only witnesses available to Ait Idir and Boudella are the other men they were arrested with. Boudella asks one witness the most pertinent question: "Do you know if I belong to any terrorist organization or if I am a terrorist?"

In a simple, almost naïve answer, the witness tells the tribunal that Boudella is not a terrorist. "All I know about this person is that he is a very nice and very good person. He takes good care of his family," the other detainee says.

The military panel asks the detainees many questions during each tribunal: Where they grew up, where they worked, if they'd ever been to Afghanistan, if they belonged to any terrorist organizations. Then, the panel wraps up the unclassified session of the tribunal.

"Mustafa, you shall be notified of the tribunal decision upon completion of the review of these proceedings by the convening authority in Washington, D.C.," the tribunal president tells Ait Idir.

That was two years ago. Ait Idir and Boudella were both found to be enemy combatants and remain at Guantanamo Bay. In January, they will have spent five years in the prison camp. They have yet to be charged with any crimes.

Critics have always said that the Guantanamo tribunals are deeply flawed. Among other things, they point to the fact that detainees are only allowed to sit in for the unclassified session of the tribunal. They are banned from seeing or hearing the classified information against them.

Lawyers at Seton Hall University recently evaluated the records and transcripts for nearly 400 similar military hearings at Guantanamo. In most cases, they found, the government did not produce any witnesses at the tribunals, and detainees were only allowed to use other detainees at witnesses.

The Pentagon dismisses such criticisms, arguing that the tribunals are fair, and that the detainees are allowed to state their case, and produce witnesses and evidence of their own.