Accessibility links
Witness to Testify Against Polygamist Leader Polygamist prophet Warren Jeffs appears at a preliminary hearing in Utah today. Jeffs is the biggest target yet in a two-state crackdown on the persistent practice of polygamy. The leader of the nation's largest polygamous group faces two counts of being an accomplice to rape. 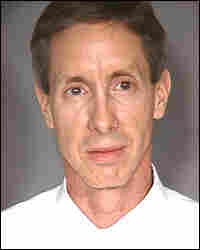 Warren Jeffs, seen in a police photo, is charged in Utah with two counts of "rape as an accomplice." Getty Images hide caption

The primary witness against Warren Jeffs, the leader of the nation's largest polygamist group, is expected to testify in public against him for the first time Tuesday.

Jeffs is the leader of the Fundamentalist Church of Jesus Christ of Latter-day Saints, or FLDS Church. He's charged in Utah with two counts of "rape as an accomplice."

The Tuesday hearing in St. George, Utah, will determine whether the case will go to trial. It also features the young woman who is the primary witness against Jeffs. She was 14, she says in court documents, when Jeffs assigned her to "marry" her first cousin, a 19-year-old at the time. NPR does not name alleged victims of sexual assaults.

The woman says she repeatedly protested the marriage and the sexual relations that went with it. She says Jeffs responded by telling her it was her religious duty to follow his direction and the direction of her "husband." FLDS faithful believe Jeffs is a prophet of God. He arranged the co-called "spiritual marriage," which is not legally recognized. And Jeffs allegedly told the woman her salvation depended on her compliance.

Prosecutors charged Jeffs with two counts of "rape as an accomplice," a first-degree felony punishable upon conviction by as much as life in prison. Utah law says a person is guilty of the charge if they "solicited, requested, commanded, encouraged, or intentionally aided another to have sexual intercourse with another person without the victim's consent."

The alleged rapist, the woman's "spiritual husband," has not been charged. That has defense attorneys claiming the basic criminal act in the case has not been established. They also say that Jeffs gave the young woman religious advice and direction consistent with the tenets of his faith.

Tuesday's probable cause hearing takes place about 40 miles from the twin communities Jeffs and his group dominate. About 6,000 followers live in the border towns of Hildale, Utah, and Colorado City, Ariz. Jeffs and some of his followers also face charges in Arizona.

FLDS members see the Jeffs prosecution as harassment, says Rodney Parker, a Salt Lake City attorney who has represented Jeffs in the past and counsels some of his followers now.

"It's the fact that he's being prosecuted for doing something that is within the parameters of his religious calling," Parker says. "They see that as religious persecution."

"I think this is not so much a question of religion as it is a question of criminal law," counters Erik Luna, a professor of criminal law at the University of Utah School of Law, "If this individual happened to be underage and she was forced to engage in sexual contact. And if a particular religious authority figure was in any way aiding and abetting this."

Jeffs and his followers say they believe polygamy is necessary for eternal salvation. Three wives are considered a prerequisite for heavenly blessings. Wives are taught to submit to the authority of their husbands, according to a lesson Jeffs himself taught at an FLDS school before he became the group's prophet. In that same lesson, Jeffs said husbands should not force themselves on their wives.

The FLDS Church is an outgrowth of the teachings of Joseph Smith, the founder of the Church of Jesus Christ of Latter-day Saints, better known as the Mormon Church. Mormon leaders officially abandoned polygamy in 1890 and condemn it thoroughly now. But the practice persists among tens of thousands of people who believe they practice the Mormon faith as it was intended to be practiced. Jeffs' group is the largest of a number of groups in the western United States, Canada and Mexico.

The Utah case does not directly involve polygamy. It attacks underage marriages, a practice of some polygamist groups.

"It's the beginning of really going after the crimes" related to polygamy, says Rowenna Erickson, who spent 34 years as a polygamous wife before co-founding an anti-polygamy group called Tapestry against Polygamy. But "without polygamy," she adds, "this wouldn't be happening."

Polygamy alone has been difficult to prosecute. Most plural wives don't see themselves as victims. "Spiritual" marriages don't leave a public paper trail. And polygamous groups are secretive. So, prosecutors focus on associated crimes, especially forced marriages involving underage girls and older men. Jeffs is their most prominent target yet.

Warren Jeffs and the FLDS May 3, 2005
Polygamists on Utah-Arizona Border Under Scrutiny May 3, 2005