Accessibility links
Tom Waits: The Whiskey Voice Returns Known since the 1970s for his distinctive, gravelly voice, singer-songwriter Tom Waits has since given up whiskey for family life. But echoes of his hard-living ways can still be heard in his music. 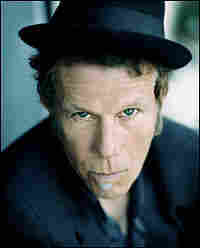 Waits Talks About 'The Pontiac'

From the CD set Orphans:

Bottom of the World

Over the years, the once hard-living singer-songwriter Tom Waits has given up whiskey for family life and for a productive songwriting partnership with his wife, Kathleen Brennan.

But the flavor of the whiskey is still in Waits' voice, and his song lyrics still invoke the poets of the Beat Generation.

Waits, who turns 57 in December, has released a new, three-CD set called Orphans.

It features songs both old and new, originals and covers (although most of the songs are by Waits and Brennan).

Known since the 1970s for his distinctive, gravelly voice, Waits in recent years also has written music for movie soundtracks.

He talks about the process of writing songs for film, the music on his new CD, and his ability to sing with the desires of a "crooner or a clown."