Accessibility links
Troubled Schools Try New Lures for Better Teachers In high-poverty and high-minority schools -- where students are arguably the most in need of an experienced teacher -- they're the least likely to get one. In North Carolina, some educators are trying to attract teachers with financial incentives. 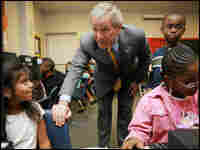 New research out this month highlights one of the most persistent problems in education in this country. Poor and minority students score far below more affluent whites on tests and other measures of academic success -- high school graduation rates, college attendance, and degrees.

One reason is the quality of teachers. In high-poverty and high-minority schools -- where students are likely to be the most in need of an experienced teacher -- they're the least likely to get one. In North Carolina, some educators are trying to attract teachers with financial incentives.

The Value of Experience

The value of veteran teachers is easy to see in Bill Ferriter's classroom. The sixth-graders at Salem Middle School are putty in his hands. Ferriter has his own energetic teaching style. He's in charge, but he's still a kid. When he laughs, the students laugh. When he sets them to work coloring in a map of the Roman Empire, he somehow manages to give individual attention to every kid.

Ferriter has won so many teacher-of-the-year awards, he can barely fit them all on the trophy table in his classroom. He loves his job, in a well-off suburban school just outside Raleigh. But he also feels guilty.

"I personally wrestle with my decision to teach at an affluent school. It's something that I feel a great sense of shame over," he says.

Ferriter says that like many of his peers, he came to his current school because of an inspiring administrator, who helped create the right learning environment. But he says it's not a given that he could be equally effective in a high-needs school.

But Ferriter is just the kind of teacher that administrators would love to have up the road at Hairston Middle School, in Greensboro, N.C. Hairston has been cited for failing to raise test scores for two consecutive years. Ninety percent of Hairston students get free and reduced-price lunches.

Principal Lewis Ferebee was brought in to turn things around, and he has made a good start. But he says it's hard to attract top talent for a school stamped with the government label "in need of improvement." That can put added pressure and stress on teachers to perform, he says.

"And when people have choices, a lot of times they don't want those type of stresses on them," Ferebee says.

Hairston certainly does not look like a problem school. The building is less than five years old, the roomy classrooms still sparkle, the athletic facilities gleam. The spacious library has an aquarium and a cool collection of globes.

"Last year, we had one of our elementary schools that had all-new teachers in grades three, four and five. This middle school here," Grier says, referring to Hairston, "did not have a certified math teacher all year long. It's, quite frankly, something we won't tolerate."

Grier's response to this teacher shortage is Mission Possible, a program named -- in a burst of optimism -- after the latest Tom Cruise movie. Starting this year, teachers can earn up to $15,000 in annual bonuses for working in targeted schools.

To get the biggest bonuses, teachers must show they've increased students' test scores by a certain margin. Grier says teachers have long been rewarded for seniority; the new program would also reward them for results.

"What we have said in Guilford County [is], not only are we going to pay you differently based on experience and degree. We're also going to pay you based on whether or not you get strong academic results from your students' learning," Grier says. "What we were doing before was not working, and it was cheating children out of a quality education."

Superintendents around the country have long insisted they need to be able to transfer the best teachers to troubled schools. Union contracts often prohibit that kind of action. But in right-to-work states like North Carolina, it is an option.

Transferring Teachers Against Their Will

In the state's largest school district, Charlotte-Mecklenburg, new superintendent Peter Gorman is threatening to transfer teachers whether they like it or not. Gorman points out that the state already pays higher salaries to teachers with advanced degrees or with special qualifications. Gorman says the state has a right to ask for something in return.

Gorman knows if he's too aggressive, teachers will just leave for the suburbs. And teacher Bill Ferriter says it won't do any good to foist this problem onto teachers.

"If we offer incentive bonuses to teachers, and recruit them to situations where the working conditions are impossible, then those teachers aren't going to stay with the highest-needs students," Ferriter says.

This policy debate prompts a bigger question: Just who are the right teachers for high-needs students?

At West Mecklenberg High School, another school in need of help, the school's turnaround principal has recruited Rhiannon Reilly, a 24-year-old, second-year teacher. She is teaching the novel Monster, a disturbing tale of a 16-year-old accused of murder. Her students are completely engrossed in the novel.

Some experts might point to this scene as an example of the problem: low-income students being taught by a newcomer. But West Mecklenberg's principal regards Reilly as a star. Reilly says her youth is a plus.

"I think it almost is better that I'm a new teacher, because the kids feel that they can relate to me a little bit," Reilly says. "That's not to say that the more experienced teachers don't do a great job, because they do. But I have a lot of energy, and I can devote a lot of my time to this, because I don't have a family and I don't have other things going on outside the school."

Reilly gets extra money to teach at West Mecklenberg, but she says she spends much of that bonus on supplies for her students. She loves teaching at the school and seems to thrive on the pressure to succeed.

Charlotte-Mecklenburg and other school districts are now focusing on recruiting teaching teams -- younger teachers led by experienced mentors. The hope is that the tag-team approach will make the transfer to a challenging school a little less lonely.