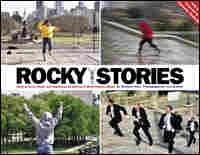 Scroll down to read excerpts from the book.

The original Rocky featured one of the most famous scenes in movie history, Rocky Balboa racing up the steps of the Philadelphia Museum of Art and raising his arms in triumph.

Each year, thousands of tourists create their own Rocky moment by running up those same stairs. Photographer Tom Gralish and writer Michael Vitez spent a year meeting and photographing those runners. They've written a book called Rocky Stories: Tales of Love, Hope, and Happiness at America's Most Famous Steps.

The book captures various peoples' stories who run in the footsteps of Rocky. Steve Inskeep talks with Gralish and Vitez from the stairs of the Philadelphia Museum of Art. 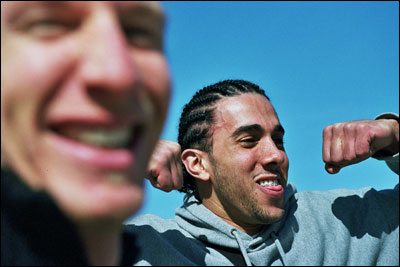 The steps and the movie and what Rocky represented may have meant more to Mehdi Jabrane -- may have affected him more -- than anyone else I met there. I will long remember his smile, his zeal, his desire to walk a righteous and successful path. -- Michael Vitez

Mehdi Jabrane, 25 years old, is the son of a Moroccan father and a French mother who met working in a shoe factory in Pau, a small city in southwestern France. Mehdi grew up there in a housing project for immigrant workers. He had a very difficult childhood.

He was raised as neither Muslim nor Catholic, but simply to believe in God. It seemed everybody else in school had more money than his family, who couldn't even afford a car.

"I always felt I was inferior," he said.

His father had a drinking problem, and when Mehdi was 16, his parents divorced. He began to get into trouble as a teenager and dropped out of high school in his last year.

Mehdi first saw Rocky on television when he was young. "I was shocked," Mehdi recalled, "because a guy from nowhere made an incredible thing, becoming the world champion, a thing he never dreamed because it was so far from his reality."

Rocky Balboa became his role model. "Because I never used to talk with my father," he explained, "I always tried unconsciously to find a paternal figure. I don't know how many times I saw the film on TV, on VCR, and now on DVD, but it always makes me cry when I'm alone. It gives me hope. It gives me courage. When I see the film, I still do pushups with one hand. Thanks to those films, I always knew that I have to stay positive, even if sometimes I wasn't that good."

In 1998, an American vacationing in France invited Mehdi to visit her in Philadelphia. He mopped floors for four months to earn airfare, but the day before he was to leave, she changed her mind and told him not to come. He went anyway.

"I decided to go to Philly to make my dreams come true," he said. He ran the Rocky Steps like his fictional hero. "When I was there, I can't describe the feeling I got. It was like a new start."

Back home, Mehdi began to turn his life around. He entered a work-study program at a pharmaceutical firm, and soon he will receive his college degree, the first in his family. He has plans for an MBA.

"I know it will be difficult, but I know everything is possible."

He has returned to Philadelphia twice to run the steps again. "It's like a pilgrimage," he said. "I find my motivation in Rocky, maybe because he's a model for me. He's humble, modest, a hard worker, and he never gives up -- all the things I really want to be."

I met Mehdi when he visited the museum steps on February 28, a Sunday, about two o'clock. He came with friend Kevin Sampson. They ran together, laughing. At the top, both faced the city and raised their arms in victory. Then they hugged. Sampson's girlfriend captured it on video.

"Each time, it's the same motivation, the same desire, the same dream," said Mehdi. "When I'm upstairs, I feel great, untouchable, proud, because the road was long for me to come here. I'm not talking about the trip from France, but the road to be a good person."

Excerpted from 'Rocky Stories: Tales of Love, Hope, and Happiness at America's Most Famous Steps' with permission from Paul Dry Books. 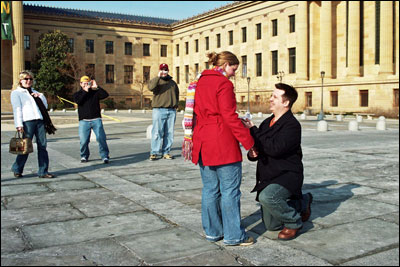 I never knew what would happen at the steps, or when. I think I was just as surprised as the bride-to-be when the proposal came. "Oh my God," I thought. "He's on one knee!" I watched quietly, along with all the tourists who had figured out what was going on, before I approached the newly engaged couple. -- Michael Vitez

Eric Williams fell in love with Julie Reeb in the summer of 2002 when she joined him working behind the bar at the Lyon Oaks Golf Club in suburban Detroit. It took Eric nearly a year to gather the nerve to ask Julie out, but after just one date, they became inseparable.

Eric, an elementary school teacher, has had a best friend since kindergarten, Alex Baker, who lived with his wife, Kristin, in Philadelphia. When Eric and Julie decided to visit Alex and Kristin there for New Year's, Eric had an ulterior motive: Six months before, he had decided he would propose marriage to Julie at the top of the Rocky Steps.

"We both love the Rocky movies," he said, "and I knew the scenery would be a great backdrop to a perfect moment." He also knew "she would never think that I would do it there." To make certain that Julie wouldn't see a proposal coming, Eric told her three weeks before Christmas not to expect a ring. He just didn't have the money.

On the last afternoon of the year, they "just happened" to be driving past the Philadelphia Museum of Art. The six in the car -- Eric and Julie, Alex and Kristin, and Alex's brother and sister-in-law, Max and Tammy -- were all in on the plan, except for Julie, of course.

Julie responded honestly: "Oh, we're not going to run, are we?" She had watched the Rocky movies countless times with Eric, but it was nearly two o'clock and they hadn't eaten all day. She was hungry.

They parked the car, and as everyone walked toward the steps, Eric began singing "Eye of the Tiger," the anthem from Rocky III. "We were singing to pump us up to run the steps, just like Rocky used the song to pump himself up for the fight against Clubber Lang," Eric recounted.

As he ran the steps, Eric had a lot on his mind. He was hoping he wouldn't fall or run out of breath. (Alex had even joked that he should bend down and act like he was short of breath after the run, to throw off any suspicions, but Eric rejected that idea.) He was also hoping with all his might for one more thing: that Julie would say "Yes."

The six of them ran up the steps in the brilliant sunshine. They looked like so many others, just having fun, enjoying the moment. Then Eric dropped to his knee, right near the Rocky footprints. He opened a small jewelry box to reveal a diamond ring glinting in the sun.

"Oh, my God!" was Julie's reaction. She was clutching her small pink purse.

"Will you marry me?" Eric asked.

Their friends were all pointing cameras, snapping away. Julie was confused, almost stunned. Eric slipped the ring on her finger, then tears rolled down her cheeks.

"I'm, like, so shocked right now," was all she could think to say.

Finally, Alex had to know: "So what is your answer?" he called out.

Julie, as you might expect, had been so blown away that she couldn't respond, but she regained her wits and let out an emphatic "Yes!"

Eric stood up and kissed his new fiancée. Everything had worked out perfectly -- the setting, the surprise, the answer. "I think Julie really brings out this compassion in him," Alex said later. "She hasn't changed him, but only brought out the best in him. You could say that Adrian brought out the best of Rocky."

You could say the Rocky Steps bring out the best in people. Let's hope they always will.

Excerpted from 'Rocky Stories: Tales of Love, Hope, and Happiness at America's Most Famous Steps' with permission from Paul Dry Books. 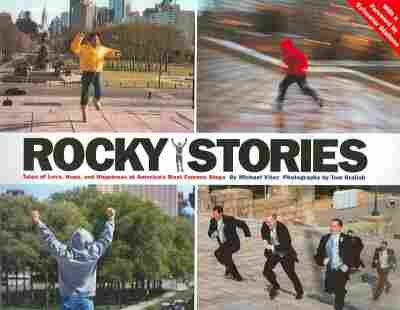 Tales of Love, Hope, And Happiness at America's Most Famous Steps